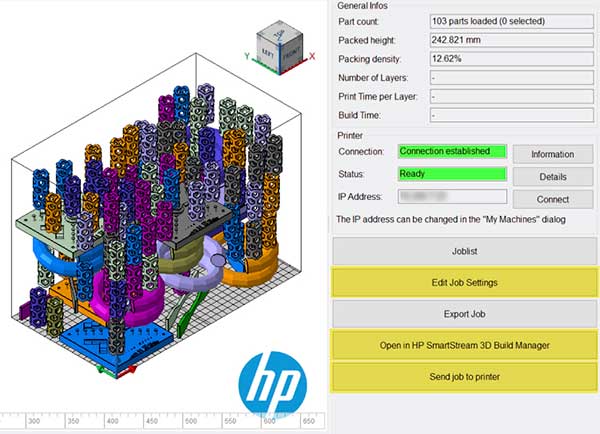 Take 3D printing to a new level with the latest release of Autodesk Netfabb. This 3D printing software is designed to help users accomplish more work in less time with fewer build errors, according to Autodesk.

Expect improved integration with HP machines. Specifically, quickly establish print setting customizations with the ability to create, save and load print profiles for a given material right from Netfabb. In addition, transfer the full build platform to HP SmartStream 3D Build Manager with a single click.

Now users can clone supports between similar parts, taper polyline supports to minimize the footprint as well as the effort required to remove them. Automatically create bar supports that recognize thin walls and generate a single path of bars, overriding the global contour offset to wall setting.

The Custom Part Library can be populated with your own geometries so there is quick access to parts used often such as custom test specimens used to fill up build platforms and common objects, such as giveaway parts.

Duplicate parts easily with the newly redesigned rectangular pattern dialogue. Automatically fill the build volume with selected parts and slices simultaneously. Automatically select all parts inside or outside the platform, making it easier to move these parts to a different platform or delete them entirely.

A new scripting example will allow you to compare two similar meshes automatically, and help identify differences with colors and graphs. Automatic support separation lets you separate open and solid supports into two parts with one click giving increased control over objects when assigning toolpath parameters. The ability to clone any workspace allows for faster duplication of a build platfrom to experiement with different packing, slicing or toolpathing strategies easily.

1. New 3D packing methods. Two new algorithms increase packing density for processes that don’t require support structures, such as SLS and MJF. A size sorting algorithm prioritizes large parts for the center of the platform while filling the remaining volume with smaller objects, while the gravity algorithm uses a physics-based engine to simulate gravity and packs parts more closely.