Phidias Lab will use VR CAVE system from Antycip Simulation to help students with design concepts.

Phidias Lab will use VR CAVE system from Antycip Simulation to help students with design concepts. 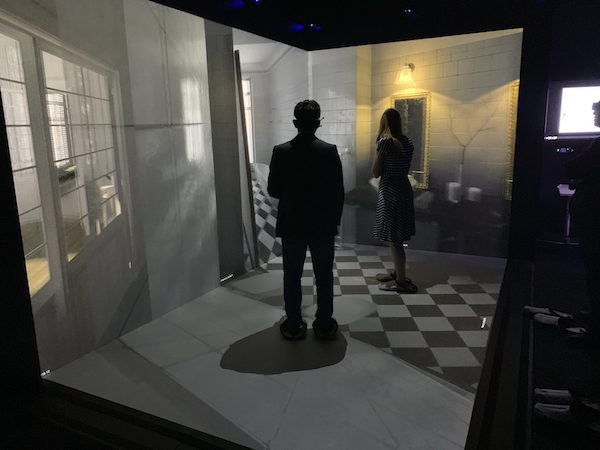 The Phidias Lab will use a VR CAVE installation from Anticyp for a wide array of student projects in art, design, and architecture. Image courtesy of Anticyp.

Technology Focus: Augmented/Virtual Reality
In this Special Focus Issue, our writers take a look at the evolution of AR/VR for design....
Sponsored Content

The University of Huddersfield in the UK recently installed a state-of-the-art VR CAVE system at its new Barbara Hepworth Building, named after the famous sculptor, which houses the School of Art, Design and Architecture. The VR CAVE, housed in the School’s Phidias Lab, was installed by VR integration specialist Antycip Simulation on behalf of its client Roche AV.

Designed to function as an experimental AR and head-mounted display (HMD) facility, the Phidias Lab is home to an eight-screen video wall with several modes for exhibiting and presenting, a motion capture area, a feature sound and lighting system and now, a highly advanced immersive CAVE system, according to a press release from Antycip.

Surrounded by a 16-camera Vicon motion capture system, the CAVE supports a wide range of virtual environment needs. According to the company, it provides students from a variety of academic subjects the opportunity to develop their design concepts, without the need for potentially expensive physical models or printed material.

Roche AV, an audio-visual specialist and incumbent supplier to the university, was appointed to populate the new building with modern technologies. They got involved with the immense Phidias Lab project after successfully integrating AV systems within the Oastler building. When assigned the CAVE project, Roche AV called upon VR specialist Antycip Simulation to design and deliver the immersive projected display environment.

Antycip Simulation designed a three-face CAVE, comprising of three solid state Barco F90 laser projectors. With 4K resolution and 3D capability, the projectors are equipped with ultra-short throw lens optics to address the primary front projection face of the CAVE and the wing face positioned on the right side. Both projectors are inverted and enable huge savings on the real estate required for the rear projection throw distance behind the solid specialist rigid acrylic substrate screens.

A third F90 projector utilizes a specialist mirror to fold the light path down to the floor, where the content is combined with the two rear projection surfaces, thus offering a truly immersive display environment. Each projector is fed a high bandwidth stereoscopic signal using pure fibre optic based cable links to avoid potential electromagnetic interference.

Vicon spatial tracking cameras are calibrated to offer an interactive volume within the display, so that a dynamic eyepoint can be tracked for a single user wearing the supplied RF synchronized active shutter glasses. This tracking system also supports the interactions from a wireless handheld device, used for navigation within the virtual content as well as to initiate and control any interactive feature activated from the TechViz software while immersed.

The solution is driven by dedicated PC-image generators with GPUs synchronized in both hardware and software to address the demands of rendering large complex datasets.

Due to the varied use of the CAVE, the university required a system which could be used by students from a range of technical backgrounds and abilities. “We needed to mitigate the need for complicated programming or the use of additional programmes before a model could be viewed in VR,” said Stephen Calcutt, technical manager and co-ordinator for the University of Huddersfield. “Antycip Simulation recommended that we use the TechViz software as its support of native applications such as Solidworks, Navisworks, Revit and Rhino, which are used by the School of Art, Design and Architecture, makes it a vital component of the ease of use system. It allows students to create and instantly display 3D stereoscopic interactive content within the CAVE that is dynamically linked to the applications they know, without having to convert complicated data first.”

Students with no background in VR can display their datasets within the CAVE, without having to export or translate the file formats, optimize the rendering performance, and load the dataset into another third party rendering solution that can drive the CAVE.

Additionally, each university department relies on a diverse selection of applications specific to individual subjects and focuses, making it a challenge for a CAVE system to support the specific requirements of each department. The CAVE accepts any OpenGL visual based content, making automatic changes upon the original dataset without the need for reverse engineering. Live changes to the dataset can even be shown within the CAVE.