Reimagining Manufacturing on a Worldwide Scale

Formlabs hosts 1-day event to explore how to accelerate manufacturing's potential in the 21st century.

Formlabs hosts 1-day event to explore how to accelerate manufacturing's potential in the 21st century. 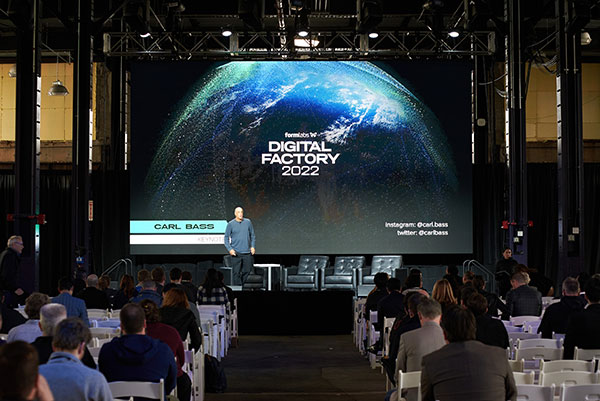 Formlabs’ Digital Factory 2022 took place on May 3 in Boston, a hybrid event that hosted more than 500 attendees in-person and virtual. Image courtesy of Formlabs.

Save Time and Reduce Costs with NoSupports™ Metal Printing
Metal 3D printing is a high energy process in which it is possible for unmanaged...
Prototype/Manufacture Resources

The path forward for global manufacturing, with its ever-increasing automation and digitized network of suppliers worldwide, leaves plenty of unanswered questions. Answers to those questions may exist within the imaginations of innovative manufacturers who have the capacity and, perhaps financial backing, to “reimagine” systems and ways of doing business that rely on stronger collaborations and thinking beyond what’s currently possible.

Formlabs aimed to capture the essence of such a sizable theme in a one-day Digital Factory 2022 event in early May themed, “Reimagining Global Manufacturing.” The event, hosted at Flynn Cruiseport Boston, was in-person and online, offering about a dozen sessions, panels and remarks led by global leaders throughout the 7-hour show, who addressed upcoming systems and technologies needed to have a more robust workforce and foolproof supply chain.

Although a specific breakdown of in-person versus online attendees was not available at presstime, Formlabs’ organizers said the 2022 event hosted a total of more than 500 attendees representing more than 30 countries.

This program first launched in 2017, a smaller scale event at the same location in Boston. The last time the event was hosted was in 2019 to a sold-out crowd.

Fast forward 3 years. “COVID triggered the biggest factory shutdown since World War II,” says Grayson, Digital Factor’s emcee. “For those in the manufacturing world, you quickly responded, when polled, that if you had started moving to the cloud, to some connected environment, some industrial connected world, you seemed to fare much better in restoring back to normalcy when you could.” 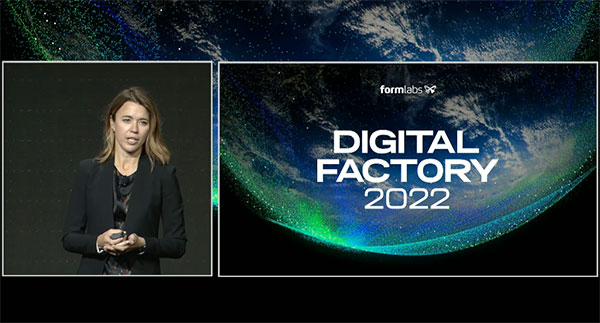 But there were other challenges to grapple with in the aftermath of all that happened in the last 3 years, according to Grayson who cited the No. 1 concern: worker availability. A whopping 500K jobs were lost overnight and now 800K jobs are still left open, a number that is projected to climb to a widening gap of 2 million within this decade.

“You see wages are going up, but attrition is still happening,” she says. What is happening may be tied to automation and worker support. Not to mention shortages affecting the supply chain.

One question the event put on the table: What does it mean to have a dynamic and responsive supply chain?

A number of companies were represented, including Apple, Raytheon, GE, Stanley Black and Decker, Texas Instruments, with many manufacturing professionals in the audience. Attendee job titles ranged from VP to founder to C-Suite roles to designers and engineers.

During the event, the company hosted a pop-up factory that produced upward of 300 parts by attendees who took part in an assembly line to assemble and package their Xi phone chargers, printed on the Fuse 1.

One speaker, Bass, former Autodesk CEO, launched into a talk filled with observations he’s made of companies in the deep tech and hard tech space.

He set the table with his opening remarks, “My interest in manufacturing and how we design and make things is not at all academic. I spend most of my days in my workshops building things. Collaborating with friends, industry, academia … trying to figure out how to make things better and faster, how to do it over and over in an automated way.”

He describes a personal project he took on with his son. A couple years ago, as he shares, one of his sons decided to build an electric go-kart before getting his driver's license.

“He made it, then I made it autonomous,” Bass explains. “I crashed it, and he screamed and yelled. Then my buddy who is a huge F1 fan, saw the go-kart and said what we really need to build is an electric Cobra.”

So Bass bought a kit to build it. “You’d expect a gigantic combustion engine to go into it. Instead, we took it and put in two big electric motors. Now we have this crazy fast electric Cobra that goes from 0 to 60 in 3 seconds. It's an incredibly scary vehicle to drive,” he says. Continuing with the tinkering, that automotive project led to an eventual conversion of a 1950s Chevy truck to electric, that he uses to drive back and forth to his shop daily. 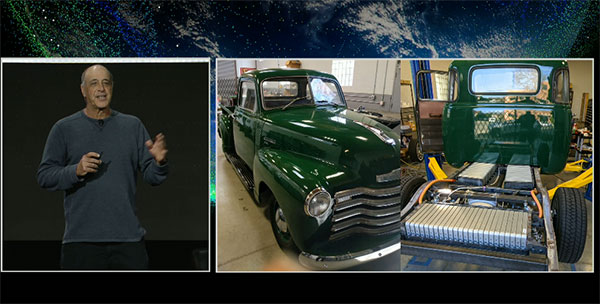 Carl Bass of Autodesk and the 1950s Chevy truck that he converted to electric. Image courtesy of Formlabs.

All the while building and tinkering, Bass says he had a burning question on his mind: how do we use computers to both design and manufacture things in ways otherwise would be expensive to do over and over again? How do we do this in more automated ways?

During his talk, Bass shared observations he’s made about companies he has explored. For example, San Francisco-based Planet, started by NASA scientists, they essentially send what functions similar to cellphones to space to take pictures. The company now has about 300 satellites in space that mage the earth every day and show interesting trends—looking at coral reefs, ships in a port, deforestation. “This gives people actionable insights,” Bass explains.

Other companies he highlighted include Built Robotics, Arris, Velo 3D, and Higharc, a company that takes software and transforms how it is used to design things by automating architecture, sales and construction processes on the web.

Looking over the list of companies he’s recently observed, Bass has drawn up a list of useful observations.

“The first observation that surprised the heck out of me: of almost all of the deep tech companies I'm involved with, they don't fail because they failed to produce the technology. Almost all the founding teams for deep tech startups are heavily over indexed on their tech proficiency,” Bass shares.

So what is the problem and what goes wrong?

“Often, they build the wrong thing.” They build what Bass calls “er” products—“faster, better, cheaper. While those are all good attributes, most people severely underestimate how much better faster or cheaper something has to be for people to change from what they use today to something else. Viability is a low bar—products should not be judged by it.”

Second observation relates to scaling. “Software is way easier to scale than hardware. Building with your team is way harder than having a contract manufacturer halfway around the world. A lot of companies think of this process as an afterthought and I think it's job No. 1. Getting people to scale is really important.”

And 15 years later, Bass did a complete 180, recognizing the number of important decisions was minimal. What really matters? “You hire really good people and set the culture. Deep tech startups are hard, but incredibly worthwhile. Ironically it's not the technology that is the limiting step. It's getting the product definition right, the product market fit right, getting scaling right and building the right culture and team.”

Later in the event, Max Lobovsky, Formlabs CEO, highlighted some product innovations at Formlabs while speaking to the future of product development.

“We want to expand access to digital fabrication so that anyone can make anything. Historically, 3D printing has been too expensive and too difficult to use. … we want to solve barriers to entry.

He says that focusing on the goals of agility and flexible product development will lead to robustness in the supply chain.

With such goals in place, Lobovsky says, “Not only can we survive shocks to the supply chain but we also get stronger. We actually grew in 2020 and 2021 when our competitors were shrinking and struggling in dealing with shortages. Orient yourself around speed and product development and flexibility and that will bring robustness to your supply chain.”

One of the panel discussions explored challenges impacting innovations. It featured Lobovsky, Shouraboura, and Bass.

“In terms of innovation, the biggest challenge, whether you're a small company or a big company, it usually doesn’t work at all,” Shouraboura confesses. “You end up going from failure to failure to failure. You just need to do it with great enthusiasm. Then it doesn't matter whether you work for a startup or a big company. If you're not afraid to fail, it will work,” she says, in an almost counterintuitive statement. 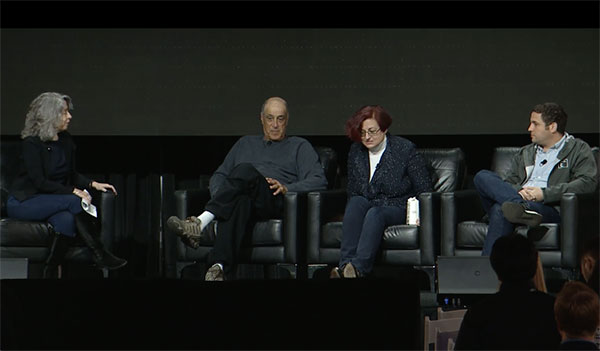 A panel explored the challenges to innovating successfully. From left: Amy Feldman, Formlabs moderator; Carl Bass, Nadia Shouraboura, and Max Lobovsky. Image courtesy of Formlabs.
Bass differentiates innovation according to size of companies. Generally speaking, Bass suggests, “Big companies do a much worse job on innovation than small companies. There are exceptions. But it's not surprising—big companies aren't built to innovate.”

“There's a mindset that comes with smaller startup entrepreneurs and the team. The people in these companies believe the world will be a better place if this thing [product] exists. That's completely different from going inside a big company and saying to a group, ‘You six engineers, I need you to work on this.’ You can get people to do it but it doesn't come with the same level of enthusiasm.”

“But the reward in big companies, when you actually do something, it has a gigantic impact in industry. That's the tradeoff—agility with one, impact with the other—and sometimes you are lucky to have both.”

Among the additional highlights during the event was a closing Q&A with Randy Altschuler, moderated by Amy Feldman. Altschuler talked marketplace trends he’s seeing.

“There’s a heightened awareness now about supply chain fragility because of COVID, as well as the impact of the war and geopolitical tensions,” Altschuler says. “There’s a lot of talk about reshoring and moving manufacturing back to the U.S. We're still seeing most companies following traditional trends of offshoring versus domestic. Companies inherently want to have local supply chains. But it's still not happening.” 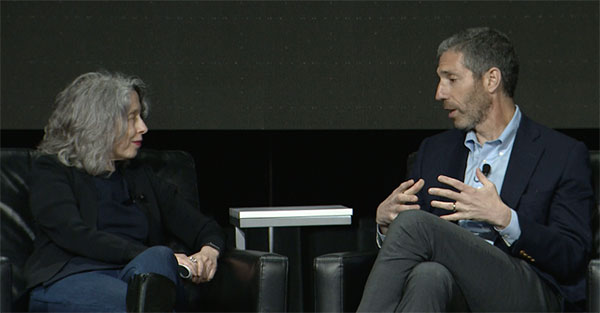 He says some obvious roadblocks to reshoring include cost. “Unfortunately it's less expensive in many instances to manufacture overseas.”

Between 2019 and now, Altschuler cites how China has become 20% less expensive to manufacture there than in the U.S. “That is obviously one barrier to some companies who are only looking for price,” he says.

“The second issue, in the U.S., we're not investing enough in building more manufacturing capacity. The level of investment in the U.S. today is at the same level that it was in 1993. It's still actually below prepandemic levels,” says Altschuler.

“We have too much of a focus on a 4-year liberal arts education. That's wonderful for some people, but the opportunity in manufacturing is huge. We have this thought that vocational training is somehow not a good job. Nothing could be farther from the truth—these are high-paying jobs and they're technology jobs. We should be encouraging people into vocational training. It's a fabulous opportunity for growth and will spur manufacturing growth here in the U.S.”