New 3D Printer Offers up to 500,000 Colors and Multiple Materials

Stratasys J850 PolyJet 3D printer is designed for designers, with capacity to print at higher speeds.

Stratasys J850 PolyJet 3D printer is designed for designers, with capacity to print at higher speeds.

Stratasys has announced the next generation of its full-color, multi-material PolyJet line, the J850 3D printer. The J850 has a variety of improvements and supports new materials as well as those created for previous J-series printers.

The company says the J850 has been built to meet the needs of the full design process in industries including consumer goods and electronics, automotive and various educational settings. Typically the design review process includes two separate prototyping streams, one of evaluating shape with a single-color model, and the second of reviewing color and texture. The J850 allows design processes to share the same 3D printed models.

The J850 offers seven resin basins, providing for all primary colors and multiple materials. Stratasys says the result is the ability to print 500,000 different colors.

The Stratasys J850 is the first 3D printer to be certified as Pantone Validated. This means the universal color palette Pantone supports can be reliably printed on the J850.

The J850 supports all materials offered for previous versions in the J-series. In addition, Stratasys introduces two new materials. VeroUltraClear can deliver high clarity and finely detailed models similar in appearance to glass. Using VeroUltraClear on the surface layer of a printed object allows visualization of internal features. DraftGrey is a low-cost concept material ideal for fast, affordable iterations in early design stages. 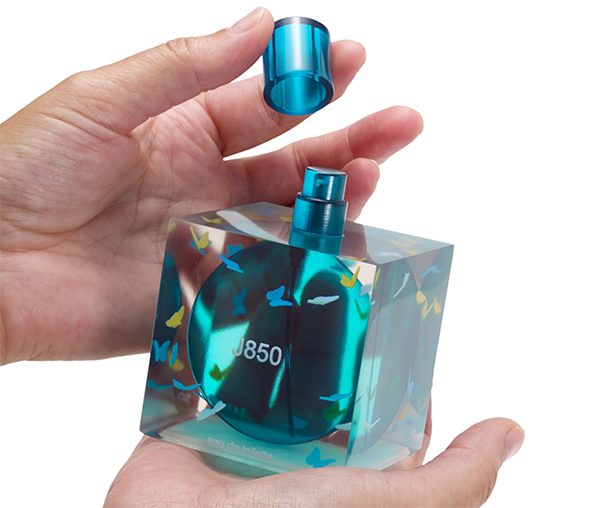 The Stratasys J850 3D printer can print a virtually unlimited combination of colors and textures in one model. Image courtesy of Stratasys.

The J850 fully supports the use of GrabCAD Print software, allowing the user to 3D print directly from any CAD model without the time and complexity of converting the model to STL before use. The J850 also supports GrabCAD Voxel Print, utility software that allows control of print attributes down to the individual voxel within the complete 3D volume of the part. The software also allows adding custom layer slicing, and supports the use of existing third-party slicers that send information directly to the 3D printer. Using Voxel Print allows a designer to control the mix of materials throughout the model, something not possible at the CAD level.

The multi-material capabilities of the J850 allow it to print various surface elements into a single object, including hard and soft, rough and smooth. The  J850 can print wood grain, simulated leather and various texture maps.

Stratasys will provide existing J750 customers with an on-premise upgrade path to the J850.

See why DE’s Editors selected the Stratasys J850 3D printer as their Pick of the Week.