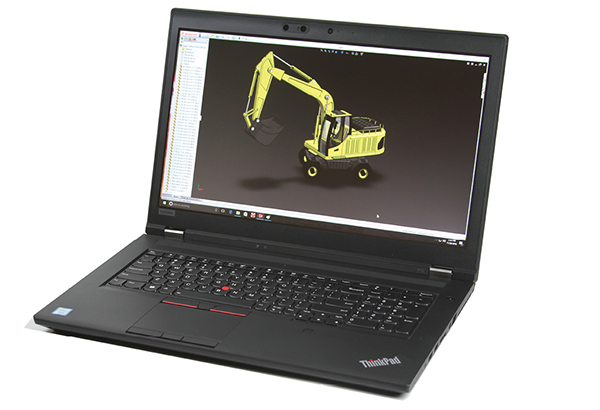 Lenovo recently sent us its ThinkPad P72 mobile workstation, the top of its P-series lineup. The ThinkPad P72 is the latest iteration of the company’s 17-in. mobile workstation, and is aimed at engineers and designers who run the most demanding applications, want a large screen and need lots of storage. We reviewed the previous generation, the P71, which at the time was Lenovo’s only VR-certified ThinkPad (DE, May 2018).

Like its predecessor, the Lenovo ThinkPad P72 comes housed in a charcoal gray case made from magnesium and aluminum and wrapped in glass fiber and polyphenylene sulfide. The system measures 16.4x11.1x1.2-in. (about 1/4-in. longer than the P71) and weighs 7.73 lbs. (nearly a half-pound less than the P71). The large 230-watt external power supply (7.8x3.9x1.0-in.) adds another 2.12 lbs, including its cables.

Raising the lid reveals a 17.3-in. display and 105-key backlit keyboard with separate numeric keypad. As we have come to expect, the excellent, spill-resistant Lenovo keyboard is perhaps the best available in any laptop. Lenovo offers a choice of two in-plane switching matte surface displays—full high definition (1920x1080) or ultra high definition 4K (3840x2160)—neither of which are available as touchscreens. The 4K panel provided in our evaluation unit added $300 to the price. A 720p webcam flanked by a pair of microphones is centered above the display, with an infrared camera to its left.

A round power button is located adjacent to the upper-right corner of the numeric keypad while a fingerprint reader is positioned to the lower-left of the keypad, just below the cursor keys. A 4x2.25-in. touchpad with three dedicated buttons is centered below the spacebar. There is also a red pointing stick nestled between the G, H and B keys with its own three buttons directly below the spacebar. 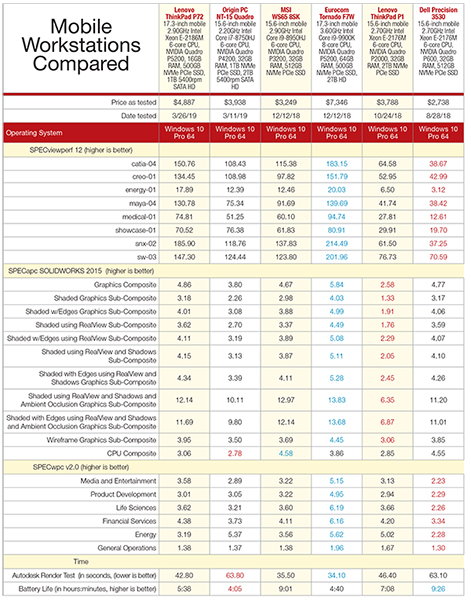 A pair of stereo speakers is concealed beneath a perforated screen just above the keyboard. The caps lock and number lock keys each have their own LEDs as do the function keys dedicated to the speakers and microphone as well as the ESC key, which doubles as FnLock. There are also hard drive activity and Wi-Fi lights located in the hinge area below the center of the display.

Our evaluation unit came with the 2.9GHz Xeon E3-2186M, which added $300 to the price. That CPU has a 12MB SmartCache, a 45-watt thermal design power rating, and a maximum turbo frequency of 4.8GHz.

Although all four available Intel CPUs include Intel HD Graphics P630, every ThinkPad P72 model also includes an NVIDIA Quadro graphics processing unit (GPU). The base Core i7 configuration uses a Quadro P600 with 4GB of memory, or you can opt for an NVIDIA Quadro P2000, which adds $195.

Systems equipped with the Core i7-8850H CPU can also be upgraded to the NVIDIA Quadro P3200 VR-ready graphics card. The base Xeon configuration includes an NVIDIA Quadro P4200 graphics card with 8GB of memory, but systems equipped with the more powerful Xeon CPU (like our evaluation unit) are automatically upgraded to the Quadro P5200 with Max-Q for an additional $965. That GPU includes 16GB of GDDR5 memory and 2,560 compute unified device architecture (CUDA) cores. It has a 256-bit interface and delivers a bandwidth of up to 230GB per second while consuming 150 watts.

The ThinkPad P72 base configurations come with 8GB of DDR4 2400MHz memory, but with four memory sockets, P72 systems can be equipped with up to 128GB of RAM (or 64GB for Xeon-based systems equipped with error-correcting code [ECC] memory). The computer we received came with 16GB of ECC memory (adding $200 to the cost), installed as a single 2400MHz small outline dual-inline memory module. 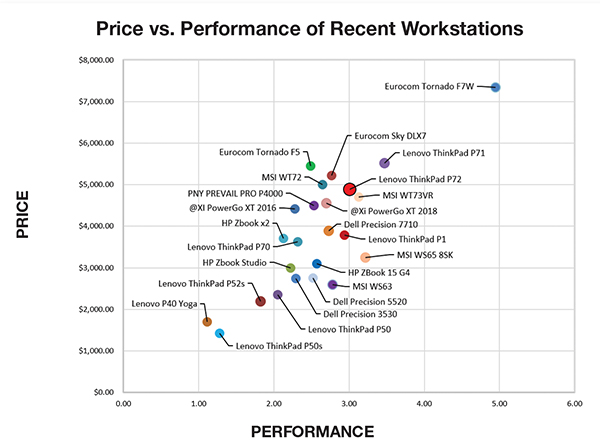 Lenovo announced its updated 17-in. mobile workstation, the ThinkPad P73, in June. It is slated to be available later this month.

The 17-in. workhorse in the Lenovo portfolio delivers the largest workspace. Its Dolby Vision 4K UHD screen, designed to maximize the creative space, is suited for multi-window applications and split screen multi-tasking.

The model also delivers top-of-the-stack processing and graphics power with the 9th Gen Intel Xeon and Core processors and up to NVIDIA Quadro 5000 RTX graphics.

The Lenovo ThinkPad P73 will start at $1,849, according to the company.

The P72 supports up to two M.2 solid-state drives (SSDs)as well as a 2.5-in. SATA hard drive. Although the entry-level systems come with just a single 256GB SSD, Lenovo offers M.2 drives with capacities up to 2TB for the primary drive, but oddly limits the second M.2 drive to just 256GB. Our evaluation unit came with both a 512GB Lenovo PCIe NVMe OPAL2.0 M.2 primary drive (a $200 upgrade) and a 1TB Seagate 7200rpm SATA drive (adding an additional $90). A 2TB 5400rpm SATA drive costs just $25 more.

As we have come to expect, the P72 includes lots of connectivity options. The right side provides a combination microphone/headphone audio jack, two USB 3.1 ports, an SD card slot, a mini-DisplayPort connector, a full-size RJ-45 Ethernet jack and a security-lock slot. The left side houses a smart card slot and an always-on USB 3.1 port that can charge USB devices whenever the computer is connected to AC power, even if the system is off. The rear panel provides an additional USB 3.1 port, an HDMI port, a pair of Thunderbolt 3/USB Type-C ports and the connector for the external power supply.

Dual-band Wi-Fi and Bluetooth come standard. Although a six-cell 99Whr battery is the only choice, it kept our ThinkPad P72 running for 5 hours and 38 minutes, about 20 minutes less than the P71. The Lenovo mobile workstation remained cool and quiet throughout our tests, reaching 50dB under heavy compute loads.

Lenovo workstations have a history of delivering great performance, and the ThinkPad P72 definitely lived up to that reputation. On the SPECviewperf benchmark, which focuses on graphics, the P72 scored near the top on all the datasets, and did quite well on the SPECapc SolidWorks benchmark.

On the very demanding SPECwpc benchmark, the Lenovo ThinkPad P72 also delivered excellent results, although its storage scores lagged the field just a bit. Independent tests have shown that the M.2 drives currently used by Lenovo do not perform quite as well as the Samsung 970 EVO drives used by other original equipment manufacturers and system integrators. That said, its overall results on this workstation benchmark were still quite good. Its 42.8-second average to complete our AutoCAD rendering beat the previous generation ThinkPad P71, which at the time had set the top mark on this test. But that result falls short of several other mobile systems we’ve recently reviewed.

The base configuration with a Core i7 CPU comes with Windows 10 Home 64-bit, with the upgrade to the Pro version costing $80 more. But all systems based on Xeon processors include Windows 10 Pro for Workstations. The standard warranty covers the system for just one year with depot or carry-in service. Additional coverage is available at the time of purchase that can extend the warranty for up to five years, including accidental damage protection, on-site service and premier support. We boosted the standard warranty to three years for pricing purposes, which added $93.

The ThinkPad P72 is certified for applications from independent software vendors including Autodesk, Bentley, Dassault Systèmes, Nemetschek, PTC and Siemens. You can build a custom configuration via the Lenovo website, where our P72 priced out at $4,887 after an automatic online discount. When coupled with its great performance, that price lands the Lenovo ThinkPad P72 at a very sweet spot in price/performance, making it an ideal choice for those looking for a large mobile workstation.