New desktop system said to rise to a new class of industrial equipment. 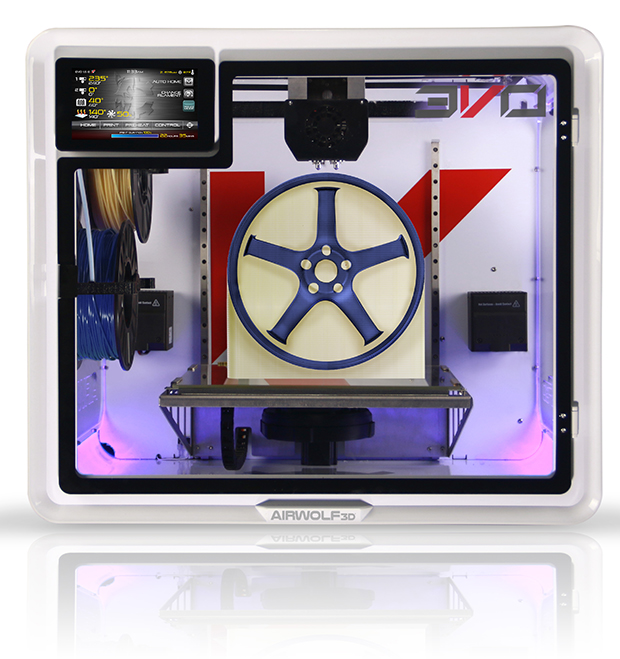 Tools that Build Sustainable Products
Design solutions are emerging that can help integrate sustainability.
COVID-19 Pushes PLM/PDM to the Cloud
From bill of materials and file sharing to collaboration, many functions move to the cloud...
CAASE20: Diving into Diversity in the STEM Workplace
Harvey Mudd College president offers practical insights into tackling diversity from an academic perspective.
When Robotics Intersect a Pandemic
Robotics and the technology that drives them have stepped up to the plate to assist...
More Features

Reinventing VR and Collaboration in 2020
Join us for a live webinar to see how NVIDIA® Quadro® RTX™ and HTC are bringing people together...
Features Resources

Airwolf 3D makes interesting 3D printing equipment. They’re tough, affordable desktops with lots of versatile features, notably the ability to 3D print big parts with speed. Take its Axiom line. It has found its home in small and large engineering shops in various industries, as well as schools. From a link off today’s Editor’s Pick of the Week write-up, you can read and see how this outfit in San Diego uses them to make custom-fitted shoes.

Airwolf 3D recently took another step forward and introduced its fifth-generation additive manufacturing system. This unit, according to Airwolf 3D, brings industrial oomph to your desktop. It sounds pretty neat. And it’s not industrially priced—around $8K.

Named the EVO Additive Manufacturing Center, this unit comes out of the box with a roomy 12x12x11-in. build volume and a snappy 250 mm-per-second print speed. It can print a 40-micron high layer, although Airwolf 3D recommends a 200-micron or better layer height.

The EVO sports dual printheads. It auto levels and calibrates. It has linear precision guides and an LED-lit machine vision system. A full-color touchscreen provides controls and status reports. A nice touch is that EVO has a HEPA and carbon filter air-purifying system that actively contains ultra-fine particles and volatile organic compound emissions.

EVO, which is a wordplay on EVOlution, will work with 40 different materials. That includes materials with print temperatures up to 320ºC (608ºF) as well as carbon-fiber-reinforced nylon and water-soluble materials. In practical terms, that high temperature flexibility means you can put EVO’s build volume to good use making large parts out of thermoplastics like ABS (acrylonitrile butadiene styrene) and polypropylene.

Good stuff. But EVO also introduces a pair of functions that were obviously developed with operator comfort in mind. First is PartSave. It’s your backup if the power fails. PartSave “remembers” what was going on and resumes printing the part right where EVO stopped after the power comes back.

FailSafe is the second creature feature. It’s your backup when, say, you space out and let the filament run out or something jams. It lets you reposition the printhead where things went awry and resume the job.

Speaking of space, I’m out of it. Hit today’s Editor’s Pick of the Week link to start learning about the EVO Additive Manufacturing Center. Well worth the time.