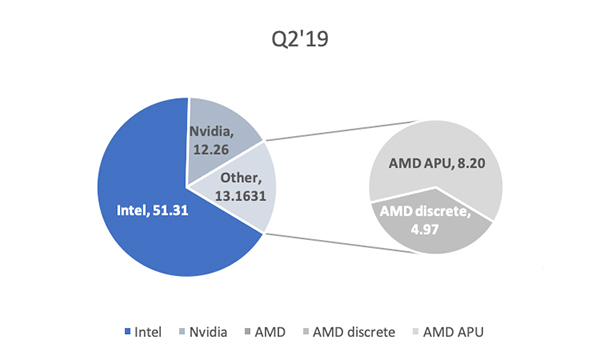 The Jon Peddie Research Market Watch report for the second quarter of 2019 found that AMD had reached a new milestone by selling more GPUs (graphics processing units) than NVIDIA, though the report cautions to interpret the findings carefully.

AMD has enjoyed three quarters of gains in market share, and with their combined accelerated processing unit-based GPUs they did take the lead in total GPU sales relative to NVIDIA, the JPR report shows. However, Intel still outsells them both combined. And if one were looking at discrete GPU sales alone, NVIDIA is the preferred brand by almost 2.5 to 1.

All three companies invest heavily in R&D, on average 24% of their revenue, with NVIDIA spending the most (percentage wise) at 27%.

Intel invests its R&D dollars in material science, CPU design, GPU design and new and other technologies (i.e., field-programmable gate arrays, memory, and other such as Mobileye and Nervana). NVIDIA invests almost all its R&D in GPUs with a little going to ARM (advanced RISC machines), and soon communications such as Mellanox. AMD shares its R&D budget with its CPU and its GPU group.

Although outspent by huge factors, AMD is taking market share away from NVIDIA in the discrete desktop segment, according to the report, and Intel in the Notebook segment—and conversely—losing to NVIDIA in discrete Notebook, and losing to Intel in desktop.

AMD had been making gains in the notebook discrete segment for the previous three quarters, and then NVIDIA came out with the Creator series and their partners introduced 40 new notebook SKUs.

Likewise, AMD had been making gains in market share for the previous three quarters, and then Intel got its 10-nm production up and reversed AMD’s gains within one quarter; however, AMD is still up from Q2’18.

NVIDIA points out that they launched their RTX Super GPUs in July, but the quarter ended 30 June, resulting in a product transition that may have impacted some shipments in Q2 as AIB vendors were selling off their existing RTX AIBs, the report notes.

NVIDIA has targeted higher ASP with the higher margins, albeit smaller volume segment of the industry, whereas AMD and Intel are addressing the total market, especially with Intel entering the dGPU segments.

Can AMD continue to gain? Soon Intel will announce its line of discrete GPUs, which the company has said will span from the low-end to possibly workstations, desktop and notebooks, and GPU-compute accelerators for the data center. The big question is will Intel’s entry into the discrete GPU market cannibalize sales from AMD and NVIDIA, or will the power of Intel’s brand attract new customers to discrete GPUs and expand the market?, the report asks.

This time next year this analysis will look completely different, the report suggests. How AMD and Nvidia prepare for the changes in the market will also be of great interest.