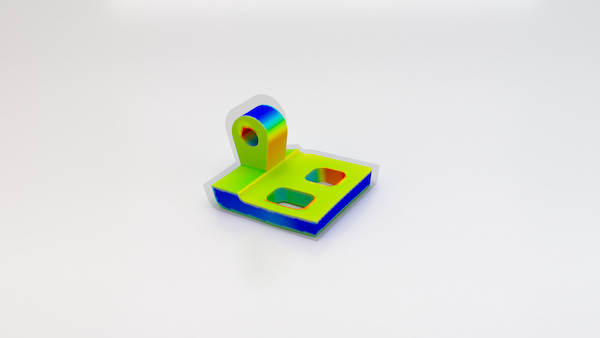 Insider Q&A: 3D Printing End Use Parts
In this Insider Q&A, the experts at Ultimaker explain how 3D printing can be...
Sponsored Content

The Power of Virtual Experiments
COMSOL users from around the world shared their stories with us, and now we are...

Fueled by the promise of high productivity at lower cost, demand for metal additive manufacturing (AM) technologies is growing as prices drop and sophistication rises. Yet challenges related to elements of the printing and post-processing cycle remain a barrier to widespread adoption—a hurdle Hexagon Manufacturing’s Intelligence Division aims to strike with the latest addition to its Simufact simulation software portfolio.

Specifically, the new module for Simufact Additive deploys simulation to prevent the distortions common to the metal binder jetting (MBJ) process. MBJ is increasingly popular thanks to its ability to print high volumes of parts with minimal spacing, possibility for larger lot sizes, and no need for support structures. Compared to other powder bed fusion processes, MBJ’s advantages make it a natural for replacing low-volume, high-cost metal injection molding processes for creating parts for automotive, aircraft, and medical parts applications. It’s also being sought as a way to reduce the costs and lead times associated with the production of complex and lightweight metallic parts like gears and turbine wheels given its ability to achieve high resolution.

Despite its myriad benefits, MBJ has a downside that Simufact hopes to correct with its newest simulation capabilities. The technology comes with a steep learning curve in order for users to fully exploit its advantages, especially related to predicting changes during the sintering process. A part is susceptible to as much as 35% shrinkage, and the models previously used with other processes aren’t able to accurately predict such distortion during the post-build sintering processes, according to Hexagon Manufacturing Intelligence officials. As a result, manufacturers have had to rely on physical trials to perfect the AM print job, which has discouraged many from taking the plunge and making MBJ a standard for production.

“During the sintering process, the part undergoes a non-uniform, anisotropic shrinkage that is largely unpredictable just by an engineer’s experience,” says Jeff Robertson, business development, Americas, for Simufact, a part of the Hexagon Manufacturing Intelligence division. “The shrinkage compensation scale factors used in the past are just not up to the task of predicting the final part shape or the required pre-compensated geometry.” Moreover, Robertson says the process can be subject to the effects of gravity with the part slumping under its own weight and friction as a result of the interface between the part and supports or baseplate. “As a consequence, the ability to successfully complete the sintering process and obtain a part that is within the acceptable dimensional tolerance can be extremely difficult,” he adds.

The new Metal Binder Jet sintering modules within Simufact Additive takes direct aim at those challenges. Using a visco-plastic multi-physics approach, the tool predicts shrinkage due to both sintering and deformation along with other outputs such as grain size, local relative density, stress, and strain. Design engineers are also able to predict and mitigate risk of part failure due to cracking or separation. The result is the ability to model a part that considers the realities of the AM process and is producible while also helping engineers evaluate and mitigate risk during the manufacturing process.

“Shrinkage and distortion can be predicted and compensated automatically according to the local behavior of the part,” says Dr. Patrick Mehmert, solutions manager, Additive Manufacturing for Simufact. “This makes costly and time-consuming trial and error iterations unnecessary to find an adapted part design that leads to a final part within the desired tolerances.”

Like other Simufact modules, the tool is aimed at production engineers, not just simulation specialists. In that vein, the MBJ module automates model setup, and preparation of CAD or CAE files can also be automated through Python scripts.

To get an overview of the entire Simufact portfolio, watch this video.