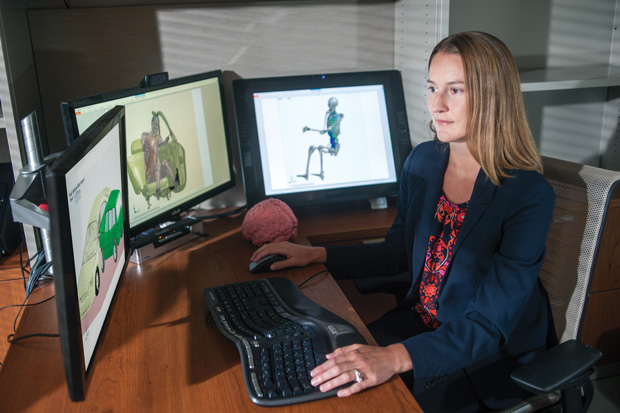 When automakers or safety agencies test vehicles, they typically rely on sensor-laden crash test dummies. However, these provide only limited information about what happens to passengers during a limited set of crash conditions. Computer models can provide much more information about injuries across a much wider variety of crash types and crash conditions. CIREN (Crash Injury Research and Engineering Network) can test thousands of variables, something that would be nearly impossible using actual vehicles and dummies because of the time and expense required, and because those crash tests generally only provide about 20 data points.

“With simulation, you get more information on the loads, stresses and strains throughout the entire human body than you would from a standard crash test dummy,” says Ashley Weaver, assistant professor at the Virginia Tech-Wake Forest University Center for Injury Biomechanics. “We can predict types of organ injury or skeletal fractures on a very finite basis. The dummies may only have sensors on discrete areas of the body, so there is less information.”

Weaver led a Toyota-sponsored research project at Wake Forest that used simulation and analytics to help automakers design safer cars by providing much more detailed data about what happens to passengers in a crash.

The project combined data collection with multidisciplinary analysis of medical and engineering evidence to determine how injuries occur in automobile crashes, without the expense, time, and limited data generation associated with physical crash testing. To perform these simulations, the team used a number of existing databases to recreate real-world crashes, and then vary different elements of the vehicle and passenger information to predict the types of injuries that would result from those variations. Weaver was the technology lead on the study during the second half of the five-year project.

A key part of the project was the use of the National Highway Traffic Safety Administration’s (NHTSA) CIREN database. The CIREN system is a computer database and wide area network for data sharing and analysis across eight trauma centers. According to NHTSA, CIREN extends its National Automotive Sampling System with medical and trauma variables in a relational/object database systems.

Engineering teams at academic engineering laboratories have been partnered with medical teams at level-one trauma centers to populate CIREN. They work together to enroll crash victims into the CIREN program. The current program includes staff at the University of Alabama at Birmingham, University of Maryland, University of Virginia, the Medical College of Wisconsin, Harborview Injury Prevention & Research Center, Virginia Tech and Wake Forest University.

For each crash, the teams collect more than 1,000 data points on occupant injuries, vehicle damage, restraint technology and the crash environment. Both medical and engineering professionals, along with a crash investigator, review each case to determine injury causation and data accuracy.

In order to conduct the research, the team created a “tunable” vehicle model, which Weaver says was one of the primary challenges of the study. “We developed a more generic vehicle model to use with our human body model, so the characteristics of the vehicle could be tuned to represent a specific make and model. We can change the airbag or seatbelt properties, for example, to reconstruct everything from a Toyota Corolla to a Hummer,” she says.

“We first tuned the vehicle model to a specific make and model, and in the second phase we took that tuned vehicle, put the Human Body Model into it and ran a set of simulations for occupant postures,” Weaver says. “We also developed an injury prediction post processor, a GUI (graphical user interface) we created in MATLAB that allowed us to batch process the output from the human body model, which gave us 30 injury metrics from each of the simulations from head to toe. We could calculate injury risk from those injury metrics.”

“We are one of six centers that enroll those CIREN cases, so we have access to the database,” Weaver says. “We pulled out real-world crashes to reconstruct in the finite element environment.”

Using real-world data with the simulations allowed the group to perform far more tests than would be possible with a physical crash test. “When we looked at the effect of occupant posture changes, we moved the seats forward, rearward and reclining, and looked at the changes in injury risk,” Weaver says. “Instead of running 120 crash tests, we ran 120 simulations and got more information on the effects of posture on injury.”

Weaver and her team used the National Science Foundation (NSF)-supported Blacklight supercomputer at the Pittsburgh Supercomputing Center and the DEAC Cluster at Wake Forest to run thousands of simulations on a virtual Toyota Camry and Chevrolet Cobalt. The Extreme Science and Engineering Discovery Environment (XSEDE) Extended Collaboration Support Service team helped set up the infrastructure and workflows to run the simulations. XSEDE is also supported by NSF.

At the time, the Blacklight system was one of the few systems that offered 1G for every compute core. The center also offered support for LS-DYNA. The team at the center helped solve some initial challenges involving job scripts for the first airbag deployment simulation that researchers worked on.

“We ended up requesting and receiving new LS-DYNA distributions that were built specifically for Blacklight,” says David O’Neal, senior scientific specialist, applications development and technology support at the Pittsburgh Supercomputing Center. “We increased our license count from 100 to 250, and then 512 concurrent processes.”

The Pittsburgh group also did scalability testing to help determine how to run the simulation jobs so they would be efficient. They also helped the researchers get the input data produced on an older release of LS-DYNA working with the newer version of the platform. “That’s what led Livermore Software to build a special release of LS-DYNA for us,” O’Neal says. “Blacklight had a vendor-specific message pathing library, so to do other types of executables we had to make special accommodations to get the older version of the software.”

An additional baseline simulation was conducted to match the actual crash from the CIREN data. Validating the data involved comparing the “tuned” vehicle to the crash test data. “We took the Hybrid II element model and put it into the generic vehicle,” Weaver says. “We ran about 200 simulations of different combinations of vehicle parameters to see how well the metrics measured from the ATD finite element model matched the ATD model in the actual crash test.”

The team used the vehicle parameters that best represented a particular make/model based on those matches found in the simulations. “Once we were comfortable with the accuracy of the tuned vehicle, we moved into the human body modeling phase,” Weaver says.

After that, the human body model was positioned in 120 pre-crash configurations per case, changing five occupant-positioning variables. The group then did FE simulations using kinematic boundary conditions from each vehicle’s event data recorder. They compared the human body model simulations to the injuries in a real-world crash case from CIREN. They used the simulations in LS-DYNA and the injury prediction post processor to generate injury metrics.

The supercomputing clusters the university used were extremely important for the research. “Both of those clusters allowed us to perform simulations very quickly,” Weaver says. “We did thousands of simulations, and having access to the clusters was essential for our deadlines. We could get outputs in a few days’ time for 100 simulations.”

Among the findings so far: More reclined seat positions can lead to higher risk of head and chest injuries, and injury-causing stress moves from the foot to the lower leg as a driver’s head comes forward into the front airbag. The simulations also allowed them to quantify the sensitivity and uncertainty of the injury risk predictions based on occupant position.

The team reconstructed 11 crashes, simulating different postures. “We found that being seated further back from the airbag in a reclining position gave us higher head accelerations and chest metrics, suggesting that the risk of head and chest injuries would be higher in a more reclined position,” Weaver says. “In most physical crash tests, the dummy is in the same position. We wouldn’t know the effect of recline without doing those simulations.”

Weaver says that physical crash testing does have some advantages in that experiments have to be run to verify the computer models, but “the advantage of computer modeling is still that you can run more simulations at a much lower cost,” she says.

Toyota, which sponsored the study, has been able to access the data and findings to use in its own vehicle design. According to Weaver, additional automakers and other researchers are interested in using the tunable generic vehicle model developed for the study as well, in addition to the injury prediction post processor.

“For automakers, this can provide them with a way to vary the different properties of the vehicle, such as the properties of a seatbelt or the vent area on an airbag, during development,” Weaver says. “Our findings on changes in occupant posture and position and the change injury metrics could play into those design decisions.”

The researchers have additional proposals out to use the modeling methodology developed for the study to extend their work. “One area we are interested in is active safety and doing simulations on that technology, and how injury risk can be affected by having active braking systems, for example,” Weaver says. “We could evaluate in the simulation what the reduction in injury risk could be if active braking were in place, vs. the result without it across different vehicle designs.” Another potential research topic: Occupant positioning in autonomous driving vehicles.

For automotive engineers, the modeling developed for this study can provide a way to validate new safety features and determine injury risk across multiple crash variables—and do so in a way that is much faster, more detailed and more affordable than physical crash tests or using hypothetical crash data.