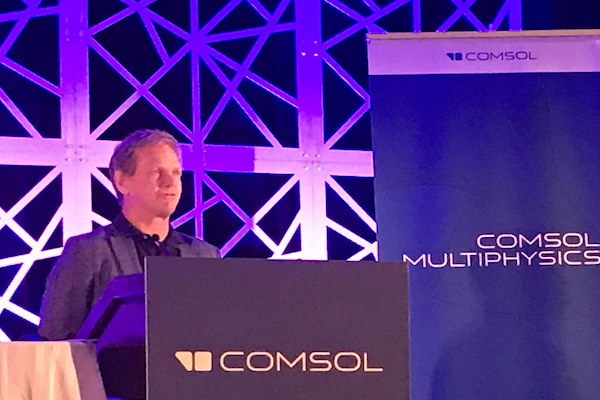 Podcast: Is Your Car a Good Listener?
Acoustic Simulation Experts Discuss Audio Analysis in Automotive
Is Your Car a Good Listener?
Breaking down the role of acoustics analysis in electric and autonomous vehicle development.
The Human Side of Simulation
Incorporating human body models as part of simulation-driven design improves design outcomes, resulting in highly...
Tools that Build Sustainable Products
Design solutions are emerging that can help integrate sustainability.
More COMSOL 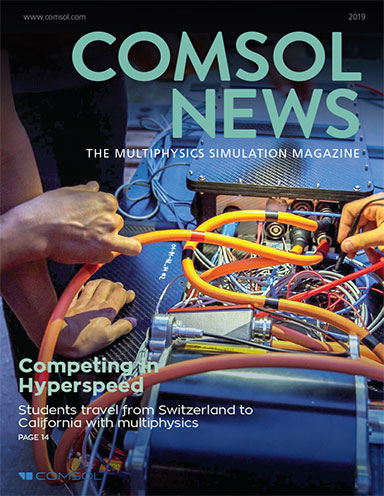 Multiphysics Simulation - Competing in Hyperspeed
This issue informs readers about the teamwork involved in a variety of multiphysics projects.

Attendees at the COMSOL Conference in Boston this week got an early look at COMSOL Multiphysics 5.5, which is scheduled for release next month.

While this release doesn’t represent any major changes—“This is not a revolutionary release, but an evolutionary one,” emphasized COMSOL President and CEO Svante Littmarck—the simulation suite includes a number of updates. The Design Module features a new sketching tool for easier creation and more versatile parametric control of geometry models. New and updated solvers will accelerate simulations, and COMSOL has added two new modules—the Porous Media Flow Module and the Metal Processing Module.

“This makes it easier to make 2D drawings, and to create more CAD-style drawings from the sketch tab,” added Bjorn Sjodin, vice president of product management at COMSOL.

Parametric optimization of fluid flow in a microvalve using the new sketching tool with dimensions and constraints capabilities available in the Design Module. Image courtesy of COMSOL.

In acoustics simulation, new functionality based on the time‐explicit discontinuous Galerkin method enables efficient multicore computations of ultrasound propagation in solids and fluids, including realistic materials featuring damping and anisotropy.

For frequency‐domain simulations, a specialized solver for wave propagation analysis makes it possible to handle higher frequencies (shorter wavelengths) using the finite element method. The new solver can be used to analyze enclosed structures such as that of a car cabin interior as well as other acoustics simulations.

“The Metal Processing Module makes it possible to predict deformations, stresses, and strains resulting from wanted or unwanted heat‐driven phase changes in metals,” said Mats Danielsson, technical product manager at COMSOL. “The module can be combined with any of the other COMSOL products for virtually any kind of multiphysics analysis that includes metal phase change. We envision users combining this with, for example, the Heat Transfer Module for influence of heat radiation, the AC/DC Module for induction hardening, and with the Nonlinear Structural Materials Module for highly predictive analysis of material behavior.”

“Since the release of COMSOL Compiler last fall, we have seen great response from our Application Builder users with this new possibility of distributing their applications in standalone form.”

A new smoothing operation for topology optimization ensures higher‐quality geometry outputs that can be used for additional analysis and additive manufacturing. COMSOL Multiphysics now has general support for import and export of the additive manufacturing formats PLY and 3MF, in addition to the STL format.

The solution also allows for direct meshing of important additive manufacturing files, which makes the solution more robust in these applications, and users will have editing tools to repair imported STL files.

The Multibody Dynamics Module provides new functionality for analyzing rigid and elastic chain drives with automatic generation of the large number of links and joints needed for modeling chain drives. Users of the CFD Module will also get new interfaces for compressible Euler flow and nonisothermal large eddy simulations (LES). In addition, the flow interfaces for rotating machinery now support the level set and phase field methods as well as Euler–Euler and bubbly flow.

“Since the release of COMSOL Compiler last fall, we have seen great response from our Application Builder users with this new possibility of distributing their applications in standalone form,” said Daniel Ericsson, application product manager at COMSOL. The latest version of COMSOL Compiler has a new compile option for generating minimum‐sized files for easier distribution. When the user launches an application for the first time, where the new compile option has been used, COMSOL Runtime is downloaded and installed, if needed, from COMSOL's website. Only one runtime is needed for applications using the same COMSOL version.