The pursuit of biomimicry shouldn’t be confined to mimicking natural shapes. 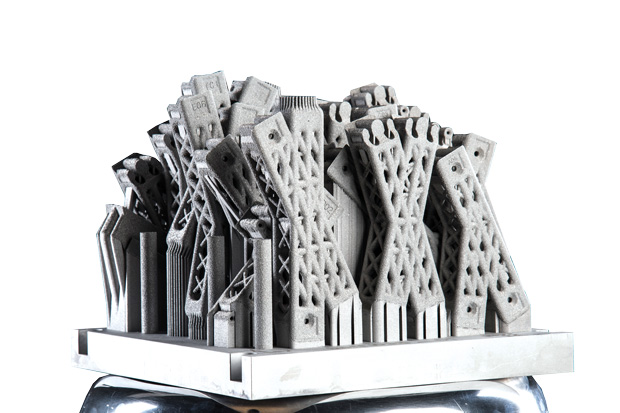 Some examples of biomimicry are easy to spot, because the form is a dead giveaway. The Dew Bank Bottle, a moisture-collecting device designed by the Seoul National University of Technology’s Pak Kitae, not only works like, but also looks like, its biological inspiration: The dome-shaped back of the Namibian beetle. The structural beams of China’s iconic stadium for the 2008 Olympic Games mimic the intricate woven twigs found in bird nests, the project’s inspiration. The wedge-shape nose of Japan’s Shinkansen bullet train bears a striking resemblance to the Kingfisher’s beak, which the engineers studied to reduce noise and air pressure in the train’s tunnel runs.

But others are harder to recognize. Sitting on an Airbus A320, most people would have no clue that the partition dividing their seating area from the rest is designed with the principles found in slime mold structures. Most drivers won’t associate human bone growth with the chassis of their car—not unless they bother to dig into the history of a software program widely used in automotive for topology optimization.

In the 1990s, Jeff Brennan was a student working on his master’s thesis. “I was researching orthopedic biomechanics,” he recalls. “We were collaborating with Dr. Noboru Kikuchi in our study of bone growth. We figured if we could create a mathematical model of bone growth, we could simulate the process.”

That’s the genesis of OptiStruct, the topology optimization software from Altair. “In the pursuit of biomimicry or Nature-inspired design, you should study Nature’s process, learn from it, and adopt the relevant, salient elements to your design. You shouldn’t just copy the shape,” Brennan, now Altair’s chief marketing officer, says.

The Living’s most prominent project was the bionic partition, a 3D-printed dividing wall between the seating area and the galley of a plane. Developed in partnership with Airbus and APWorks, Autodesk calls the component “a pioneering combination of generative design, 3D printing and advanced materials.” It is “almost 50% lighter,” according to Autodesk (autodeskresearch.com/projects/bionic-partition-project).

“We created a biological algorithm based on the growth of an organism called slime mold,” explains Benjamin. “Slime mold grows to connect dots (sources of food) in networks that are both efficient and redundant. They are efficient because they use the least amount of material to connect the dots. And they are redundant because when one of the paths is broken, the network can route around the problem and stay connected ... Although the size and material of the partition is different than that of slime mold, the logic is similar. And in our application, this approach worked very well.”

Human bone growth follows a set formula, established by evolutionary demands. It’s nature’s countermeasure against stress and loads. “Based on Wolff’s Law, when you place an implant, you can rely on the surrounding bones to adapt to the stress by placing more bone mass in optimal positions,” explains Brennan.

Generative design is an algorithm-driven approach. It relies on software programs with built-in formulas to explore and identify the best design option from a range of possibilities. Some have compared generative design to the Darwinian principle of natural selection. Examples of software programs in this market include Bentley Systems’ GenerativeComponents or GC; McNeel & Associates’ Grasshopper (a plug-in to Bentley Systems’ GC); and Autodesk Within.

The bionic partition, which separates the seating sections in an airplane, is designed using algorithms that mimic slime mold behaviors. Image courtesy of Autodesk.

Capturing the bone growth formula in mathematical terms ultimately led to the algorithm that now lies at the heart of OptiStruct. “We call it biomimicry,” says Brennan, “not just because it originated from orthopedic research, but because we’re mimicking nature’s strategy to produce the lowest energy solution to loads.”

While biomimicry principles are equally applicable to architecture and manufacturing, the adoption momentum appears to be greater in AEC (architecture, engineering and construction). That may have to do with AEC’s openness to organic forms for their aesthetic appeal, and manufacturing’s skepticism of such forms.

Many first-time optimization software users are surprised by the so-called mathematically optimized shape, which doesn’t always conform to standard mechanical conventions. That presents a hurdle in promoting the use of algorithm-driven shape optimization, often part of biomimicry projects.

“Some conservative engineers might look at the odd-looking trusses and structures and say, ‘Hmm, I don’t know if I can trust this.’ That’s just not how things are done conventionally. So there’s fear that it might break. There’s a mental resistance to these odd shapes,” says Brennan.

While the bone-like structures and natural shapes proposed by optimization software may look risky, the benefits could be persuasive. “We consistently create 20-30% lighter solutions even with simple brackets,” Brennan says.

Brennan’s experience shows people’s attitude is shifting. “In the early days of OptiStruct, I had engineers remove me from meetings because they didn’t think [the software-proposed shape] would work,” he recalls. “But 10 years later, it’s entirely different.”

What is mathematically optimal is not necessarily suitable for manufacturing, as many pioneers in optimization discovered. Using known principles of stress and strain, the software can propose the best geometry or topology to withstand them. But the software-proposed best structural shape is often filled with hollows or thin members that are impossible to machine or mold using conventional manufacturing methods.

To address this, Altair added Manufacturing Constraints to OptiStruct, allowing users to specify the type of manufacturing method involved. Taking these parameters into account, OptiStruct generates topology that’s optimal but also manufacturing-suitable. “In 1993, when we first launched OptiStruct, it was just a 2D truss-based stress optimization solution. Now, we’re able to control and leverage manufacturability, and can take advantage of advanced manufacturing methods like 3D printing that actually allow some of the previously unfeasible structural form factors to be made,” says Brennan.

With more than two decades of experience and customer testimonies under its belt, Altair’s OptiStruct development team now considers the next step—adding failsafe mechanisms into the software. “We can optimize for different load cases, like vibration, seismic loads, impact loads and large motion in addition to optimizing for damage tolerance. Fail safe is a way to produce topology with built-in redundancy. It might be suboptimal topology but it makes allowance for possible failures,” says Brennan.

The Softer Side of Robotics

Most people think of robots as rigid mechanical beings, but some in the robotic community are seeking ways to build soft robots. Instead of conventional materials, they turn to silicon, plastic, fiber and other substances that can better mimic the behaviors of skin, muscle and blood vessels. In August, a team at Harvard University announced the birth of Octobot, spawned in a mixture of 3D printing, mechanical engineering and microfluidics.

“We do not claim that our device can mimic the octopus. We present it more as a tribute to the octopus, as we are inspired by its amazing capabilities,” says Michael Wehner, a postdoctoral fellow and co-author of the paper on Octobot.

In this case, the shape of the Octobot is closely modeled on the source creature. The digital prototype was created not in a surface modeler (as its organic shape might suggest) but in SOLIDWORKS, a mechanical CAD package.

“The ultimate goal in developing the mold was to use CNC [computer-numeric controls] to cut the parts,” says Wehner. “Thus, any files would ultimately be output in a suitable file format and imported to MasterCAM to generate G-code.”

He says the likelihood of problems skyrockets with the addition of software packages, where importing from one to another could have caused inconsistencies, so he chose to start with SOLIDWORKS rather than beginning with a surface modeler and importing it into the mechanical CAD software.

Perhaps the most innovative part of the Octobot is the semi-transparent belly and tentacles, revealing the circuitry inside like the veins through jelly skin. “The Octobot was fabricated using a novel fabrication approach called embedded 3D printing or EMB3D printing,” Wehner says. “In this approach, uncured silicone elastomers are selectively poured into a mold. A needle (controlled by the 3D printer) is inserted into the still uncured silicones, and a sacrificial gel or ink is printed in the silicone. The paths printed with this ink become the internal features of the Octobot.”

The Octobot is a technology demonstration of how soft robots could be manufactured. Having overcome the pesky manufacturing hurdles, the Octobot team is looking to upgrade it with autonomous navigation. “More robust actuation strategies and more sophisticated controllers are the next steps,” Wehner says. “Considerable work has already been done to develop complex microfluidic devices, including analogs to the logic gaits found in electronic circuits. We believe this technology will quickly be folded into soft robot design to yield soft robots capable of sensing. This can be used for multiple gaits, steering and obstacle avoidance.”

With algorithms and software playing an unprecedented role in design, the human engineers may have to redefine how they conceive, develop and test products.

“Generative design augments human creativity; it doesn’t replace human creativity,” says Autodesk’s Benjamin. “There is a spectrum of ways to use generative design and some involve more human input than others. In all cases, the human works in collaboration with the computer to produce a design. And in some of the most amazing examples, the human creates inputs that are original and sophisticated (such as complex geometric systems) and then the computer produces outputs that are high performing and unexpected. The result is something that the human alone—or the computer alone—could never come up with.”

For Wehner, biomimicry is a good reminder that human technology still has a lot to learn. “Nature provides us with extremely elegant solutions to problems,” he says. “In biomimicry, we try to emulate (to a small extent) some of the surprisingly complex phenomena we see around us in nature. Looking to nature can provide us with limitless inspiration, but it also makes us realize just how rudimentary our existing technology really is.”