AM Simulation Gets More Complex with Metal 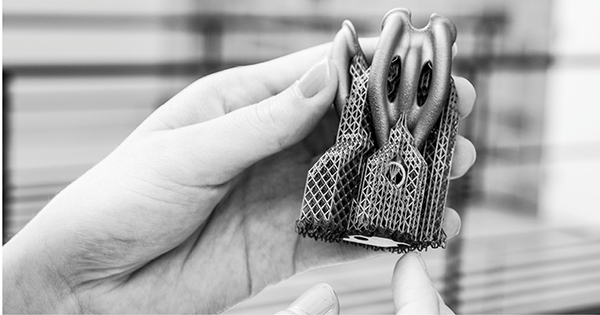 During the keynote at SolidWorks World 2014 conference in San Diego, CA, Greg Mark, founder and CEO of the startup Markforged, appeared alongside SolidWorks CEO Gian Paolo Bassi to announce the birth of Mark One.

“We have the world’s first 3D printer that prints in carbon fiber,” said Mark. “What we did is, we took the idea of laying up composites, and the mechanics of a 3D printer, and combined them.”

As a desktop printer, Mark One’s then-listed $5,000 price tag wasn’t exactly an impulse buy. But it signaled new possibilities and potentials. It was a seminal moment not just for the company, but also for the 3D printing industry in general. It meant 3D printing was no longer limited to plastic and polymer parts; it could now be the mechanism to produce metal parts that rival machined parts in strength and durability.

Around the same time, the R&D division of Autodesk began experimenting with generative design. The technology debuted under the name Project Dreamcatcher. In a teaser blog post in 2014, Autodesk technologist and blogger Shaan Hurley wrote, “What if a CAD system could automatically generate tens, hundreds or even thousands of design options that all meet your specified high-level goals?” (“Autodesk Project Dreamcatcher Goal-Directed Design,” Between the Lines, November 2014). 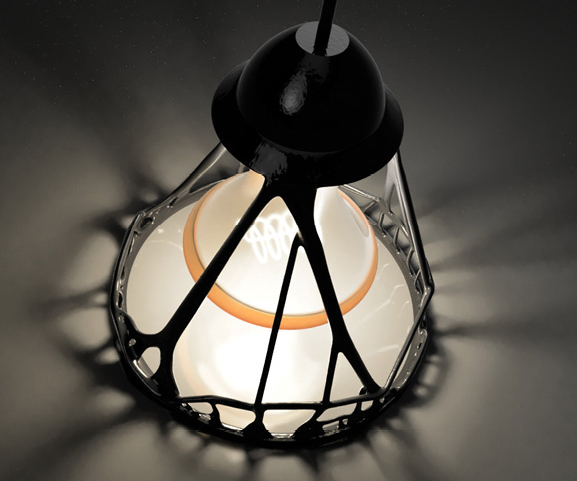 Eventually the two parallel technologies converged in the need for generative design tools to address metal additive manufacturing (AM). The question that many are now asking: Is the generative design software intelligent enough to create shapes that are suitable to produce in a metal 3D printer? To answer this, we spoke to the 3D printing industry insiders.

Ray Huff, associate engineer, Wohlers Associates, was getting ready to teach his recurring design for additive manufacturing (DfAM) course this year in Youngstown, Ohio, as part of America Makes. In day-long courses organized by the AM industry analyst Wohlers Associates, Huff and his fellow instructors offer hands-on classes and high-level lectures on best practices.

Huff believes every designer should have a desktop 3D printer. “They’re just too cheap not to,” he reasons. Makerbot offers tabletop 3D printers priced from $1,299 (The Makerbot Replicator Mini+) and up. Markforged’s desktop printers begin at $3,499 (Onyx One, Gen 2).

Even if the desktop printer you can afford seems like a world apart from an industrial metal AM system, there’s a lot to learn from understanding the process at a smaller scale, Huff argues. And even if the polymer-based part printed doesn’t match the manufactured metal part, the prototype can be used for form, fit and function, he points out.

“AM—even in the metal AM subsegment—there are so many different flavors. You can have binder jetting machines or powder bed fusion machines, for example. Then there are newer technologies like Desktop Metal, which extrudes the part. Many designers have exposure only to a few. It’s important to be exposed to all different AM methods,” he says.

The DfAM course involves using generative design software, but Huff cautions the technology is not the press-button solution some vendors portray it to be. “In the class, we use Altair’s Inspire and Materialise’s Magics, because they work well for a quick introduction to generative design, to create a part and get it printed,” he says. “Use the software to give you guidance on the general form, but know that often you need to work on that form to make it 3D printable,” he advises.

In September 2017, when SolidWorks 2018 was released, it featured Topology Study as part of SolidWorks Professional and Premium editions. As one of the widely adopted mechanical CAD modelers, SolidWorks serves as the barometer for the industry in many ways. A program known for its no-frills approach, SolidWorks usually steers clear from technologies that seem too far-fetched or impractical. Its embrace of topology study—its version of generative design—signals a legitimate need for it.

Early iterations of generative design tools lacked the ability to consider manufacturing constraints to automatically rule out unsuitable shapes and geometry, but subsequent implementations address this shortcoming. “Both SolidWorks and CATIA [modeling application under the 3DEXPERIENCE brand] tools for topology optimization and generative design have different options for manufacturing constraints,” says Mark Rushton, product portfolio manager for AM, Dassault Systèmes. 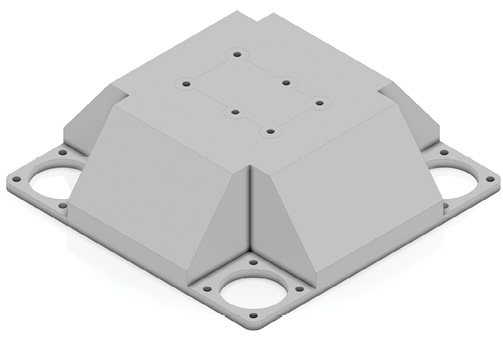 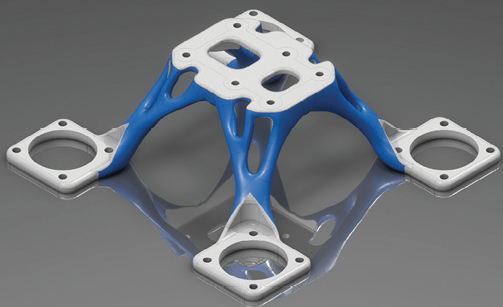 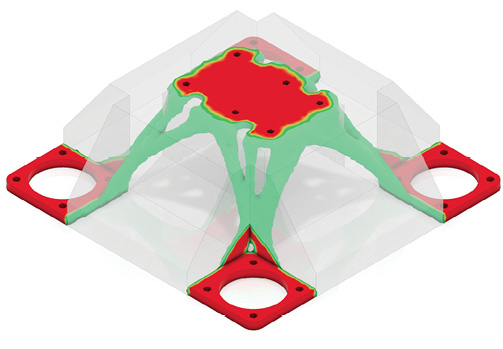 This manufacturing awareness includes the generative design software’s ability to, for example, avoid thin walls and overhangs that can cause printing problems in 3D printing or AM. These rules are now coded into many generative design tools. But are the general rules for AM good enough for metal AM?

“Every AM process is slightly different and one thing the topology design rules in all systems do not consider is the thermal stress leading to distortion,” observes Rushton. For 3DEXPERIENCE users, this could be addressed in the dedicated SIMULIA simulation applications.

“[The metal AM printing’s thermal behavior] can be simulated by our SIMULIA brand and potential problems can be prevented by putting support structures in place. Another alternative is that the model can be morphed so that the [pre-printing] distortion leads to the desired outcome after printing,” says Rushton.

Recognizing the important role AM will increasingly play in manufacturing, simulation software maker ANSYS developed the ANSYS Additive Print and ANSYS Additive Suite in 2018. “Despite its many benefits, the current additive manufacturing process is time-consuming and expensive—the price of metal powders and 3D printing materials significantly limits opportunities for trial and error during the printing process,” notes ANSYS in its announcement of the new AM-focused solutions.

In developing the ANSYS Print and ANSYS Additive Suite, ANSYS is anticipating its deployment among AM service bureaus and AM machine developers, among others.

Part of the tool’s strength comes from simulating the distortion that occurs in the AM process due to thermochemical activities. This feature allows “users to rapidly predict how their parts will distort during the build process and provides a compensated model for users to build. Distortion compensation reduces the need for trial-and-error experimental iterations. In short, ANSYS Additive Print saves users time and money to make accurate parts,” ANSYS explains in its product sheet.

Adding Cost to the Equation

The Autodesk generative design technology that started as Project Dreamcatcher is now part of many Autodesk commercial software packages, such as Autodesk Fusion 360, an integrated CAD-CAM-CAE package with cloud-augmented features.

“Each of these technologies has their own design considerations, which can also change based on the machine manufacturer and the model of the printer,” Ozel says. “Some parameters, such as object sizes, are easy to incorporate when working with design software, while some are more difficult. For example, what is the maximum angle a design feature can be printed (at) without requiring support structures? What should be the minimum diameter for a drain hole, so that build material can be removed from internal features? What should the minimum size of a feature be to ensure it will not fail to print? The list goes on.”

“Once a user selects and downloads that generative outcome, they may need to make further edits to the model such as adding drain holes, converting large holes to diamond-shaped openings and adding access material, which can later be machined for a tighter tolerance,” says Ozel. “All of this is possible within the design workspace within Fusion 360 as the outcome is a parametric and editable CAD model—not an STL.”

The standard in generative design is to have users specify a weight or mass requirement as a target—such as 75% of the original part’s mass. But Autodesk adds the option to include cost to the equation.

“Thanks to our partnership with aPriori, the generative design outcomes are analyzed by aPriori to identify a range of cost to manufacture, and presented to users as they explore the solution space,” says Ozel.

The partnership, announced in June this year, resulted in integrating the aPriori Cost Insight Engine into Fusion 360. This allows Fusion 360 users to obtain cost estimates alongside software-generated topologies.

“We also see future opportunity to extend the insights provided with each generative design study to include not only cost, but also manufacturability guidance, making the selection of design direction even more efficient,” says Stephanie Feraday, president and CEO of aPriori.

Founded in 1990, Materialise’s stated goal is “to enable new uses for the extraordinary potential that 3D printing offers.” Over time, the company expanded from only developing software to also include printing services.

“The big thing to remember when designing for metal 3D printing is that there is a need for supporting the parts while printing,” says Dries Vandecruys, design engineering manager, Materialise. “These support structures are not only needed for the building support, but also act as a heat sink for the part while it gets printed. On top of that, the support structures are in the same material as the end part, which makes removing it through post-processing quite labor intensive. This limits your design freedom and requires some extra thought in the design phase.”

In generative design programs with manufacturing awareness, choosing AM as the desired production method usually triggers a set of rules to prevent or minimize overhangs in the topology. “A rule of thumb in metal AM is to avoid overhangs less than 45º. But in practice, that angle depends on the size of the overhang and certain machine makers even claim that by controlling the process parameters, they can create overhangs without supports for angles as low as 10º,” says Ozel.

“Using a single material within laser-based powder bed fusion, we can create custom hatching strategies so that segments of our parts behave differently for different types of loading conditions. With the direct-energy deposition process, we can even create multimaterial components,” Ozel continues. “It’s important to remember that the process by which products are manufactured has an impact on a product design meeting its operational goals.”

The variety of AM printing systems is increasing. So far, the leading generative design software makers have done a stellar job in refining their topology-generation algorithms to catch up. But automation has a limit. Although it’s possible to code AM-centric rules into the generative design software’s algorithm, it’s impossible to code in a way to account for every AM system’s unique features. Therefore, designers should expect some time to refine the model.