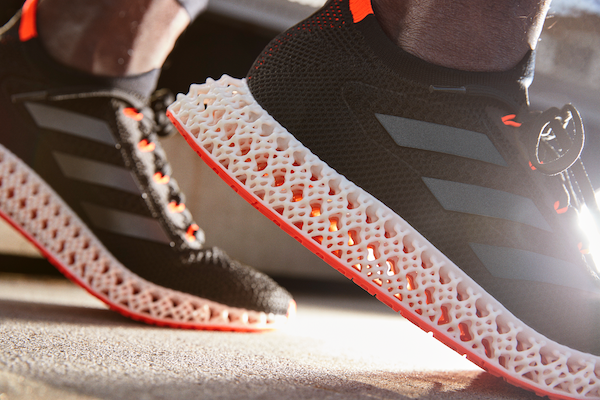 The Adidas 4DFWD lattice midsole, identified from one of 5 million possible lattice structures, has been coded to compress forward upon vertical impact. Image Courtesy of Adidas

Adidas is betting on data-driven design and 3D printing as it races to outpace the competition in the high-performance athletic footwear market.

To complement the midsole, the 4DFWD is outfitted with a new PRIMEKNIT upper material made from recycled polyester. Here too, data played a role in driving design choices. Historical mapping data was used to code the PRIMEKNIT upper to align with the 4DFWD midsole to deliver greater support and comfort for runners.

The Adidas/Carbon partnership goes back to 2017 when the pair first announced collaboration on Futurecraft 4D, an initiative to create a mass production process for complex midsole geometries, paving the way for custom, high-performance athletic shoes. The partnership arose from Adidas’ vision to promote innovation by creating shoes that would offer variable properties across the midsole to improve shoe performance for different sports. Traditional manufacturing processes like injection molding or compression molding would not support production of multiple properties in a midsole in a single piece; the alternative would be to assemble different components together, which would open the door to multiple points of failure—a scenario Adidas was determined to avoid.

Carbon’s DLS process was selected because it could support production at scale compared to other 3D printing technologies, which the Adidas design team deemed to be too slow with a choice of inferior materials. Once the collaboration was underway, the pair developed a full print and post-processing solution for the Futurecraft 4D line that enabled printing without support material.

For a deep dive on how Adidas and Carbon are partnering to leverage 3D printing to create and produce 4D lattice midsoles at scale, check out this video.