The Untapped Opportunity in Simulation
Industry analyst Chad Jackson shows how simulation is needlessly constrained, and how VCollab solves these...

Local Motors is a pioneer in custom, crowd-sourced automobiles. It was founded in 2007 on the idea of allowing members of its community to submit car design ideas, or help refine others’ designs—a process it dubs “co-creation.” As part of the process, the most popular designs are built into functional vehicles at one of Local Motors’ microfactories. Siemens PLM Software was an early partner, even launching a trial version of Solid Edge for Local Motors members called Design 1.

Hackrod: Build a Car from the Bedroom

When DE covered Local Motors in 2011, the company had one microfactory. It now has four such factories and along the way has made headlines for launching the Strati 3D-printed electric vehicle and Olli, a small, co-created autonomous shuttle.

Local Motors and its Launch Forth division, are now under the LM Industries umbrella. Launch Forth is devoted to helping other companies transform and digitize their product development processes using co-creation and micro-manufacturing. 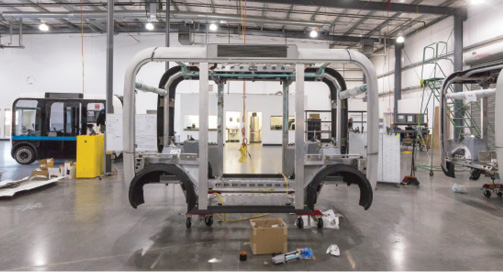 “Mass manufacturing is a relic of a past era. We’re in the middle of a mobility revolt where current modes of transportation are not sustainable and do not match up with rapidly changing consumer preferences,” LM Industries’ CEO and Co-founder John B. Rogers, Jr. said in a press statement announcing the formation of LM Industries last summer. “We can’t keep producing products the same way we’ve been accustomed to. The world is moving too fast for traditional manufacturing to keep up. LM Industries is on a mission to transform mass manufacturing to micro-manufacturing in order to match the new pace of technology and quickly changing consumer needs.”

The company’s vision goes well beyond ground transportation, with Rogers seeing it as an Amazon of manufacturing. He says the company’s manufacturing process can be applied to virtually any hardware product.

To expand the network of co-creators for its Olli autonomous electric shuttle, LM Industries Group launched an autonomous fleet challenge. The challenge invites municipalities, campuses and designated districts to propose a three-month, local use for Olli.

“This challenge is a meaningful opportunity for local and business leaders to take the next step and put their collective heads together to envision how mobility is going to change in their communities, and then have the opportunity to immediately test that vision,” said Rogers in a statement announcing the challenge.

The first challenge was open to entries from the greater Phoenix and Sacramento areas in September last year. At press time, Sacramento State, a public university in California, was preparing to receive its fleet of Olli shuttles after being named a winner of the challenge in December 2018.

The second fleet challenge opened to entries from the Greater Washington, D.C. area in December. At the end of January, the company opened the challenge to Australian municipalities, campuses, designated districts and transit or transportation operators.