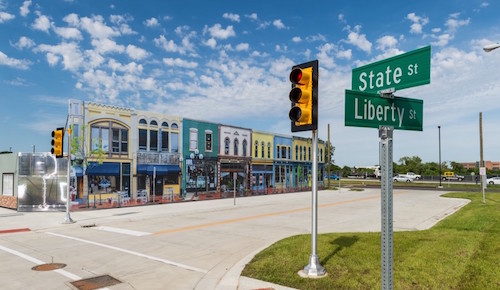 As companies like GM, Ford, BMW and others push the limits on autonomous vehicle research at the University of Michigan’s Mcity urban test site, a group of engineers are doing some slightly less high-brow work, using real people and simulation software to test crash safety for autonomous braking systems.

Despite all the hoopla, fully driverless vehicles are still off in the distant future while autonomous capabilities like automated braking systems and steering systems are starting to pop up in current generation car designs. In particular, automated braking systems, which tend to brake harder than human drivers, are closest on the horizon. They can have a much more dramatic impact on un-prepared passengers, thus the impetus behind the university’s most recent research, explains Matt Reed, Ph.D., a research professor at the University of Michigan, who also heads the biosciences group at the school’s Transportation Research Institute.

“Automated emergency braking systems apply brakes much more vigorously than people do—people famously under brake,” explains Reed. “Since these braking systems will become standard on most vehicles within a few years, we need to know what’s likely to happen to the occupants in the event of a crash.”

To explore that phenomenon, Reed’s researchers recently convened 80 people of different ages and various sizes to Mcity’s test site to serve as physical crash dummies. Standard crash dummies weren’t optimal for testing the automated braking systems, Reed says, as they typically hold static positions, which don’t appropriately mimic what happens in this kind of event. “In hard braking scenarios, we expect occupants to be thrown out of position,” he explains. “Those differences in posture and position will affect subsequent safety so it is necessary to study that.” Moreover, Reed’s group felt it was important to include people of all sizes and body shapes, not just the standard specifications used in traditional crash test dummies.

The team developed a protocol for the physical test with full approval of the appropriate institutional boards, Reed says. The physical testers were passengers in vehicles equipped with automated braking systems and were subject to surprise events, including lane changes and sudden steering and braking to avoid a crash. All testers were situated in what Reed called a “best case scenario,” highly alert, seated properly with their safety belts properly adjusted.

Using the real people is just the first step in the test scenario, Reed says. The team collects the data from the physical hard braking test events and then deploys it in computer simulations to do deeper study on the crash events and their relation to specific injuries. The in-person testing was essential to augment the computer simulation because the simulation models on their own don’t account for muscle activity, which is needed to the analysis, he explains.

In the next phase of testing, the team will employ people in different postures and positions to develop a richer set of results. The research will be used as feedback for designing new systems for cars equipped with autonomous capabilities, including new braking systems. For example, Reed says the research could be used to design features that automatically adjust seat belts or send out a warning before the brakes are applied or the car veers suddenly to avoid a crash.

Reed’s research is part of work being funded through a partnership with Toyota’s Collaborative Safety Research Center in Ann Arbor. The center has earmarked $35 million to fund research at eight research institutions, including MIT, the University of Iowa’s National Advanced Driving Simulator, and the University of California, San Diego.

Check out this video to hear more about the various autonomous vehicle testing initiatives at Mcity.