Behind the scenes at the DARPA Robotics Challenge Finals. 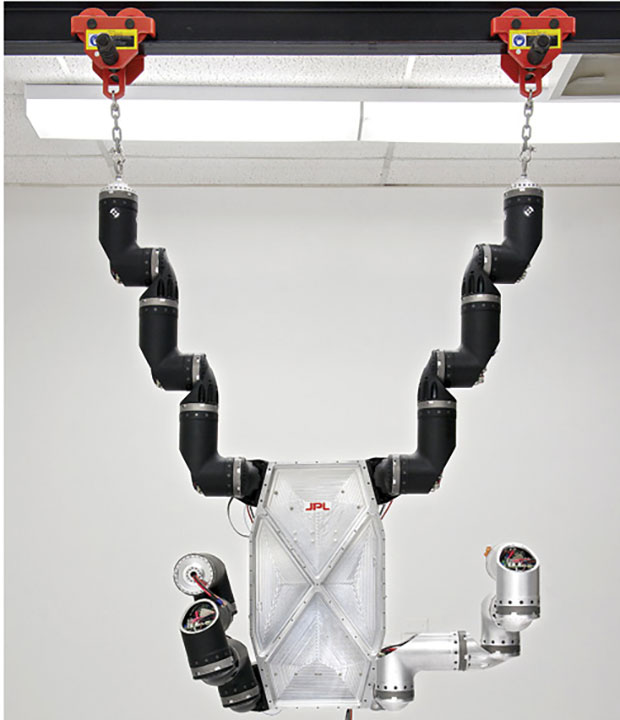 It will be the most ambitious robotics competition in the world. On June 5 and 6, in Pomona, CA, 25 teams from seven countries face off in the DARPA Robotics Challenge (DRC) Finals. At Fairplex, the site of the L.A. County Fair, the machines will walk, roll and drive (in an all-terrain vehicle) their way through challenges that test their ability to work in disaster areas too dangerous for humans.

The machines will have to demonstrate greater autonomy, adaptability and endurance than shown by any robots that have gone before. “We are trying to make the world a little more robust to disasters that are caused either by nature or by man,” DARPA Program Manager for the challenge Gill Pratt said on a call with reporters before the event.

Pratt conceived of the DRC in the wake of the 2011 tsunami and subsequent meltdown of the Fukushima Daiichi nuclear power plants on the Japanese coast. The nuclear disaster that ensued as a result of the natural one could have been mitigated—if only workers had been able to get inside the radioactive containment buildings. That’s where robots like those being built by the volunteers, professional engineers and students of the DRC teams could have come in handy.

The DRC Finals follow the DRC Trials that took place in Florida in December 2013. The DRC Finals will award a first prize of $2 million, a second prize of $1 million and a third prize of $500,000 to the teams that can best perform simulated disaster recovery operations with minimal human supervision. These tasks include driving a vehicle to the work area, walking over rubble, climbing stairs, turning valves, operating a power tool, removing debris from an entryway and opening doors.

The teams will be presented with significantly more difficult tasks in the finals than in the trials. For starters, the machines will have to operate untethered, without the benefit of external power and safety lines. That means the machines will have to have enough onboard power to make it through the hour that they will have to complete the challenge tasks in one shot. They’ll also have to be able to pick themselves up if they fall down and remain intact enough to resume work.

As if that weren’t enough, the communications link between each team’s operators and their robot will be even more degraded than before. The high-speed data link feeding the operators video and other data from their bot will drop out every minute, for a minute at a time. This is to simulate the spotty communications typically available at the scene of a disaster.

The approaches taken by the teams are as varied as the team members themselves, which range from volunteers working after hours, to the officially sanctioned and funded teams of major corporations, and none other than NASA.

The members of Team Grit are no strangers to DARPA-sponsored competitions. Working on a shoestring budget, the team competed in all three of DARPA’s robot car competitions in the 2000s, as well as the DRC Trials—as Team Mojavaton. The team, based in Grand Junction, CO, and led by Karl Castleton, professor of Computer Science at Colorado Mesa University, gets by on limited donations of cash and parts. Merely being accepted into these competitions speaks to the chops and, well, grit, of these volunteers.

“3D printing was a big part of our previous robot, and it’s a big part of our process this time,” says Castleton. The team uses LulzBot A0100 and Taz printers to print parts for the robot, including a hypocycloid gearbox that drives its limbs. The gearbox design started on the MakerBot Thingiverse. After modifying the design for its own use, the team uploaded it back into the Thingiverse community as an upgrade. “We plan to take advantage of the open source communities a lot,” says Castleton. “I have visions of us going and breaking a leg [at the competition], and then somebody from the audience says: ‘Oh, I printed one last night.’” For designing parts, Castleton uses open source OpenSCAD design software.

The robot’s CPU runs Linux Ubuntu. Interpretation of the images from the robot’s stereo cameras is enabled by OpenCV. To deal with the intermittent connectivity available at competition, the bot will rely on the open source ØMQ messaging library for sending data to and from its operators.

“A lot of the groundwork is already laid for a lot of this stuff,” says Michaela Ervin, team software lead. “You don’t have to write it all from scratch any more or be a genius like Tesla to come up with something that works.” She asserts that just about anyone with the drive and commitment can also work on cutting edge robotics projects, given the low-cost and even free tools available to developers now.

Cog-Burn, the team’s robot, stands on four legs, allowing it to conserve energy that has to go toward simply remaining upright in bipedal designs. At just 40 lbs., Cog-Burn may also be the competition’s lightest robot, which further maximizes battery life.

Team Trooper, which also competed in the DRC Trials, is the entry of the Lockheed Martin’s Advanced Technology Labs, based in Cherry Hill, NJ. Trooper is one of seven teams that DARPA has given an Atlas robot, specially designed and built by Boston Dynamics for the competition. Relieved of the need to design and build hardware for the competition, Team Trooper can devote its time to the code and the software interfaces needed to run their Atlas.

Team leader Todd Danko, a mechanical engineer at Lockheed Martin, says the DRC is equal parts competition and robotics conference. “The true winner is going to be whoever develops a technology that has longevity beyond this competition,” says Danko. “To do that, you need to be working with each other.” The members of the various teams have gotten to know each other well, says Danko, and have even exchanged some personnel. “There’s a lot of cross pollination in that way,” he says.

Team Trooper is working with Rensselaer Polytechnic University, which is contributing expertise in robotic manipulation as well as simulation. Software-driven simulation aids development as well as operations by allowing team members to plan their robot’s moves before executing them during the competition. Team members from the University of Pennsylvania are building the code needed for the robot to accurately perceive objects in its environment as well as the algorithms driving the robot’s full-body movements.

The open source Robot Operating System (ROS) provides the platform for running the robot. “We consider that the industry standard for this type of robotics project,” says Danko. “In one way, it can be viewed as just a communications layer that allows a lot of components of different origins to work closely with each other.”

Team Trooper is using an Atlas Robot from Boston Dynamics to compete in the DRC. Image courtesy of Team Trooper.

Like Team Grit’s entry, the NASA Jet Propulsion Laboratory (JPL) team’s robot, RoboSimian, is quasi-statically stable. It can either walk on its four limbs or roll around on wheels when it sits down. When height is required to perform one of the tasks, say, to open a door, the machine can rear upright. “RoboSimian’s not so much a robot as it is a collection of technologies, including things like the limbs and the software that runs all of that,” says Brett Kennedy, team leader and JPL mechanical engineer. This team also competed in the DRC Trials.

The team draws on JPL’s experience developing planetary rovers. Kennedy led the team that designed and built the Mars Curiosity rover robotic arm. Given that, cutting the power cord doesn’t seem like such a hardship. “We are of the opinion that a robot that needs to plugged into anything—whether it’s comm or power—is kind of cheating,” says Kennedy.

For hardware design, the team uses SolidWorks. Software, however, all gets developed in-house—for example, a custom simulation environment and the operator interface to go with it. For testing, the operator plans a move, simulates it and then if it looks like it will work in the real world, sends the command to execute. “That development interface is pretty tightly tied to our operator interface so we can seamlessly go between testing ideas of how the robot’s going to work to actually running the robot with it.” The interface runs on a Linux Ubuntu workstation.

Kennedy says that the ability to gather as many team members in one workspace as possible is a key factor for success. For a complex, time-constrained project like this, says Kennedy: “The less you rely on collaboration tools, the better off you are. Even though people are writing in the same code environment and theoretically don’t need to be sitting next to each other to do that, it’s just a lot more effective to have everybody in that space.”

The DRC, like all DARPA competitions, is designed to jumpstart technologies that didn’t exist before, setting them on the path to production. It is expected that the DRC Finals teams will continue development after this last event—just as the teams in DARPA’s autonomous car races did to start the self-driving car revolution.

Regardless of what teams take home prizes from the DRC Finals, the real winners will be the beneficiaries of robotic assistance following a future disaster. May the best bots win.