The Implications of Simulation’s App-ification 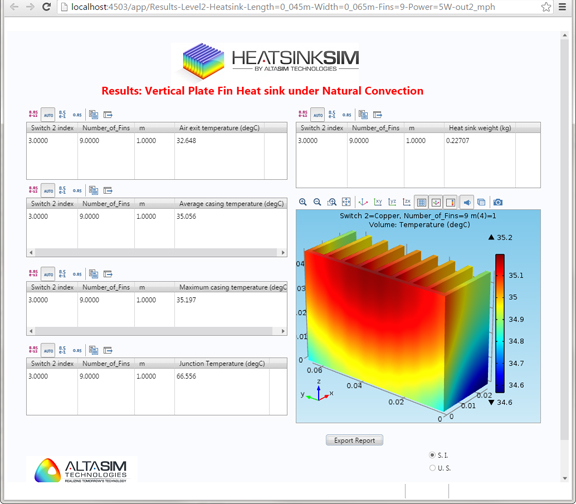 With a simplified user interface, the HeatSinkSim app users do not need to learn to use COMSOL Multiphysics software, even though the app uses COMSOL software as its solver in the background (image courtesy of AltaSim).

Nestled between York Golf Club and Spring Hallow in the city of Worthington, Ohio, AltaSim established itself as a simulation consultant specializing in the use of COMSOL Multiphysics suite. But the company is also testing the waters in the emerging simulation app market, an offshoot of the industry’s desire to make simulation much more accessible to a wider user base.

Traditionally, the use of simulation revolves around general-purpose simulation software packages. The level of expertise required by this approach limits the pool of candidates who can use the technology. But the app-ification of simulation—the movement to encapsulate repeatable simulation tasks as simple, template-driven apps—broadens the playing field. It also leave room for simulation app developers—a new type of vendors.

AltaSim’s HeatSinkSim examplifies this trend. It also illustrates the complex relationships and partnerships that must exist to support the new usage paradigm.

HeatSinkSim is an app—a repeatable simulation operation—built to run on COMSOL Multiphysics. In other words, when a user pluck in the input parameters, the app uses COMSOL software to compute the answer in the background. This allows novice users with limited multiphysics simulation software expertise to bypass the need learn COMSOL software to set up the problem correctly.

COMSOL, the company behind the popular COMSOL Multiphysics software, also encourages the app-ification with the release of its COMSOL Server, which functions as the host for simulation apps.

The shift to simulation apps is one way to level the playing field, both in the cost and the skill required to use simulation. But the simulation app market is still in its infancy; therefore, it’s difficult to gauge its commercial strength.

At the present, there’s no established pricing or licensing norm for app-style simulation usage. So the app developer, the app distributor, the general-purpose simulation software maker, and the hardware infrastructure provider must negotiate an economically viable revenue-sharing scheme among themselves.

At the same time, identifying app-ification opportunities and pricing the app fairly remain a challenge for app developers. A simulation app that’s expected to draw high-volume usage (for example, a cell-phone drop-test app) may be sold at a relatively low cost. On the other hand, an app to simulate a rare but unavoidable crisis (for example, a nuclear reactor meltdown simulator) needs a different pricing model.

Jeff Crompton, AltaSim’s principle consultant, said, “HeatSinkSim has just finished beta-testing, so we currently have no numbers on sales or usage.” He clarified that the app can be installed in a desktop PC, run remotely through a browser, or run on remote hardware. It’s available for purchase, short term lease, or pay-per-use licensing.