Robotics Designers are Shooting for the Moon 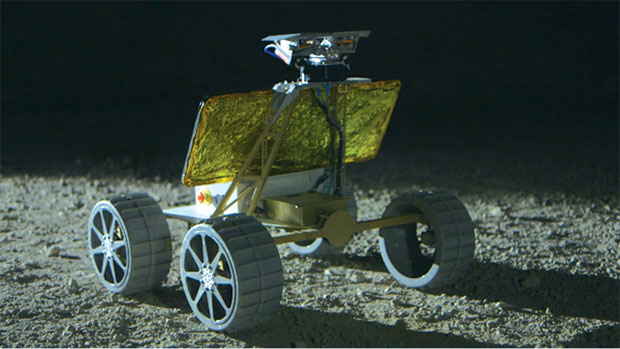 Team Astrobotic’s rover after touchdown on the surface of the moon. Rendering courtesy of Astrobotic Technologies Inc.

Team Astrobotic’s Griffin lunar lander after touchdown on the surface of the moon. Rendering courtesy of Astrobotic Technologies Inc.

The robot crawls along at a stately 15 centimeters per second at a slag heap in suburban Pittsburgh. The 72-lb. machine moves on four metal wheels, electric motors whining as it climbs over the steel-milling detritus of the last industrial age and into the next one. Twin camera eyes peer out at the surrounding no man’s land that closely resembles the moonscape that its flight-ready younger sibling will soon be expected to navigate. Operators in a trailer out of sight receive images on a 2-second delay and issue commands. It takes hours for the machine to clear the 500 meters that will be required to win the Google Lunar XPRIZE (GLXP) on the moon, but in this test, it does so without a hitch.

Welcome to the new moon race, where success is measured in centimeters traveled and the detail of the imagery captured. The technology giant Google has offered a total of $30 million in cash prizes to the first privately funded team that can land a rover on the moon, get it to travel half a kilometer once there and send back high-definition video and social media posts by the end of 2016. The first team to accomplish the main mission stands to win $20 million, with bonus prizes to be awarded for such milestones as finding water and surviving the perilous 14-day lunar night, during which temperatures drop below 200°F.

The Google Lunar XPRIZE isn’t the only way enterprising technologists can get involved in lunar exploration. Since 2012, NASA has sponsored the Sample Return Robot Challenge to foster the development of technologies needed to bring rocks back from other planetary bodies.

On June 8-13, 2015, teams from around the world will run robot rovers in competition for $1.5 million in prize money at the Worcester Polytechnic Institute in Massachusetts.

Prizes will go to the rovers that best drive themselves to a given location, collect simulated geological samples and return to their starting places.

Sixteen teams are in the running for the race, including Astrobotic Technologies Inc., the Carnegie Mellon University (CMU) spinoff whose mission simulation software and hardware was featured in the April 2013 issue (see “A New Space Race, Fueled by Simulation”), and which conducts tests of its rover at a former U.S. Steel dumping ground in West Mifflin, PA.

Astrobotic builds on the expertise of CMU robotics professor Red Whittaker and his team of students and former students who took the first place prize in the DARPA Urban Challenge robotic car race in 2007.

After Whittaker started Astrobotic in 2007, the team spun off as a separate company, also based in Pittsburgh. Now, with former students John Thornton and Kevin Peterson as CEO and CTO respectively, the team divides its engineering focus between the rover, still managed by Whittaker at CMU, and the lander that will take the rover to the lunar surface, which is being developed at Astrobotic.

Also a top contender in the competition is Moon Express, or MoonEx, founded in 2010, led by entrepreneur Bob Richards, and based at the NASA Research Park in Moffett Field, CA. MoonEx started with financing from co-founders and Silicon Valley entrepreneurs Naveen Jain and Barney Pell. The company has designed a lander that’s small enough to launch as a secondary payload rather than requiring the purchase of an entire rocket launch to send it on its way to the moon. Moon Express has acquired three former GLXP teams to avoid having to defeat them on the playing field of the moon.

The engineering choices of these top teams competing for the Google Lunar XPRIZE reflect their unique approaches to winning the competition’s top prize.

Rideshare to the Moon

Given that Astrobotic founder Red Whittaker and his team’s expertise is in autonomous ground vehicles, it made sense to base the team’s strategy on a semi-autonomous lunar rover. Andy, the rover, is named after CMU founders Andrew Carnegie and Andrew Mellon.

The communications lag imposed by the 250,000-mile distance to the moon makes direct, real-time control of the Astrobotic spacecraft and rover from Earth impossible. Instead, the machines will have to plot their own courses using machine intelligence and cameras.

“I worked on the Grand Challenges and the Urban Challenge,” says Kevin Peterson, chief technology officer of Astrobotic, speaking of DARPA’s autonomous vehicle races. “We’ve taken those approaches and iterated them for landing.” Except this time, there’s an important difference. “We had to add new software to the computer vision side because all the ground vehicle work relied on GPS,” he says. Because there are no GPS satellites in orbit around the moon, both the lander, called Griffin, and the rover must navigate another way. The solution is image processing that can estimate distances between objects based on their changing appearance as the vehicles travel.

Team Astrobotic’s rover after touchdown on the surface of the moon. Rendering courtesy of Astrobotic Technologies Inc.

To ensure they’re on the right track as they refine their code, the team working on the lander’s software is continuing to run simulations on their HP Z800 workstations with GPU (graphics processing unit) acceleration.

The Astrobotic team is still fine-tuning the design of structural elements of the lander, including its solar panels and legs. For that design work, the team uses Dassault Systemes’ SolidWorks with ANSYS structural analysis software. The ANSYS software simulates launch and landing loads and their effects on the SolidWorks designs.

Rather than acquiring its competition outright in the manner of MoonEx, Astrobotic has taken a rideshare approach to collaborating with other competitors. The company is offering space on board its lander for other GLXP teams or other groups that want a ride to the moon.

Team HAKUTO, which includes members from a startup called iSpace and Tohoku University in Japan, as well as additional volunteers, became the first GLXP team to announce a rideshare agreement with Astrobotic in February 2013. HAKUTO can now focus just on its rover—or pair of rovers—in its bid to win the GLXP. The addition of the HAKUTO rovers to Astrobotic’s lander will make this an actual, Grand Prix-style race after all the rovers descend to the lunar surface following touchdown of the lander. If all goes well, the smaller HAKUTO rover, dubbed Tetris, will descend into a collapsed skylight to search for an entrance to a cave at the planned landing site, Lacus Mortis (“lake of death”), while tethered to the larger rover, dubbed Moonraker.

The HAKUTO team, led by Takeshi Hakamada, also relies on SolidWorks for hardware design, including the rover wheels that the team prints on a Stratasys Fortus 450mc 3D printer. “The material is ULTEM,” says HAKUTO Lead Engineer John Walker, “an engineering plastic with excellent thermal insulating properties that can withstand temperatures over 200°C.”

Members of the public can also get in on the lunar rideshare action through Astrobotic’s MoonMail program. Raising money for launch is the main reason for offering ride-along payloads, and not just for the GLXP mission, but also for follow-up missions that the company plans to fly.

Astrobotic’s Griffin lander comes in for a landing on the lunar surface. Rendering courtesy of Astrobotic Technologies Inc.

Similar to the approach taken by a team that it acquired in 2012 (Next Giant Leap), MoonEx has dispensed with rovers altogether. Instead, the team is concentrating on engineering a single craft for its mission: the lander.

After touching down on the surface of the moon, the lander, called the MX-1, will take the required high-definition video, and then fire up its main engines to fly from the surface, traverse the required 500 meters and then touch down again.

With so much riding on the performance of the lander, the coffee table-size vehicle’s rocket engines are of critical importance. MoonEx Propulsion Chief Tim Pickens not only has the job of ensuring that the lander’s hydrogen peroxide and kerosene fueled main engine and 12 steering thrusters will function reliably, but also that they will deliver the thrust and efficiency needed for a successful mission. Options that Pickens is considering include switching from a pressure-fed propellant design to a higher-speed pump-fed design if initial performance calculations turn out not to match test data.

For designing rocket motors, Pickens starts with NASA’s Chemical Equilibrium with Applications (CEA) software to predict propellant performance given environmental factors such as atmospheric pressure (or lack thereof). From there, he can determine the optimal geometry needed for new rocket motor combustion chambers. Pickens and his team also predict such factors as propellant flow rates and heat transfer using C&R Technologies’ Thermal Desktop. With all of these calculations in place, the Moon Express team designs hardware for the rocket motors with the help of Autodesk Inventor and other Autodesk design and simulation tools.

Autodesk is an important partner in the Moon Express venture. “Autodesk made a substantial investment in Moon Express during our Series B round and has been supporting us with software, technology and design ideas,” says Moon Express CEO Bob Richards.

An artist’s illustration of the Moon Express MX-1 lunar lander on the surface of the moon. Image courtesy of Moon Express Inc.

“Traditionally, design solutions have entailed a hodgepodge of software from different providers of CAD, analysis and CAM tools. Often these tools would have importing and exporting challenges. Autodesk has a cool cloud-based process and software that also allows remote development and monitoring of each project at every step if needed,” says Pickens.

Pickens uses a MakerBot Replicator 2x to print rocket motor parts out of ABS (acrylonitrile butadiene styrene) or PLA (polylactic acid) plastic for evaluation by machine shops and other engineering teams working on the project. He finds it invaluable to work closely with machine shop technicians to design hardware that can easily be manufactured. Once rocket motors are ready for real-world testing, Pickens and his team collect test-fire data, including temperatures, flow, strain and acoustics, using National Instruments’ LabVIEW.

Like Astrobotic, Moon Express plans to deliver revenue-producing payloads to the moon on its first as well as subsequent missions. Both Moon Express and Astrobotic will rely on a separate launch provider to get their spacecraft into space and headed toward the moon.

Shooting for the moon, as the teams competing for the Google Lunar XPRIZE demonstrate, need no longer be the exclusive domain of big government programs. And now that these small teams of dedicated engineers have the moon within reach—and so does anyone else with the means to hitch a ride.