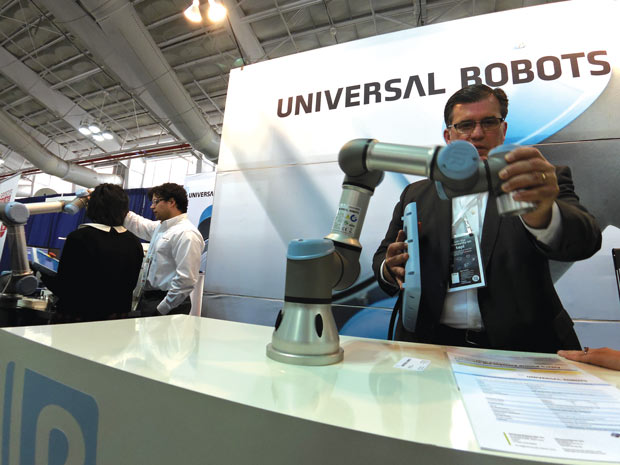 Universal Robots’ General Manager for the Americas Scott Mabie demonstrates how to program one of his company’s robots. Image courtesy of Michael Belfiore.

It’s a good time to start a robot company. That’s the word from David Askey, an MIT-trained roboticist specializing in machine vision who heads startup Ascend Robotics. He says advances in processors and sensors, as well as an influx of investment from industries facing labor shortages, make it so.

“You can do a lot of video processing real time on the robot,” Askey says. For example, a graphics processing unit (GPU) chip originally designed, as Askey puts it, “as a very fast pixel pipe,” can now be programmed as a general purpose visual processor for robots. The result is increased capabilities at a lower cost.

Mark Woods, head of Autonomy and Robotics at UK-based SCISYS, says much of the investment from robotics is moving from public-sector to private-sector financing. The DARPA-sponsored robotics competitions like the series of autonomous vehicle races it hosted in the 2000s and the more recent DARPA Robotics Challenges of 2013 and 2015 have resulted in a sea change not just in robotics technologies, but also in how they are perceived by investors and customers. “The big change I’ve noticed is that people have started to challenge the notion that humans are the best control system,” Woods says.

Thanks to these trends, robots are entering the manufacturing workplace as never before, as innovators like Askey bring more user-friendly and affordable so-called collaborative robots to market. These machines eschew the cages that confine bigger, more expensive and potentially more dangerous factory robots. And manufacturers of everything from electronics to packaged foods are reaping the benefits.

Scott Mabie, general manager for the Americas at Denmark-based Universal Robots (UR), confirms that the biggest markets for his company are in the small and mid-size businesses that would never have considered robots before because of their expense and elaborate setups that require cages and specialized programming. By contrast, his company’s UR3, UR5 and UR10 robots are small enough to be wheeled around on carts, cost less than $50,000, and can be programmed by the line workers who use them. Teradyne, based in North Reading, MA, acquired UR last year for a reported $285 million.

Robots on the Go

It’s not just collaborative robotic arms like those produced by UR and its competitors that are making their presence felt in factories and warehouses, but also mobile robots that are designed to work among humans.

Askey cites Amazon’s acquisition of mobile robot maker Kiva Systems in 2012 for $775 million as a major validation of mobile robots in the workplace. Amazon doubled the number of Kiva robots that are moving products in its fulfillment centers between 2014 and 2015, from 15,000 to 30,000, according to Business Insider.

Melonee Wise, CEO of Fetch Robotics, which launched in 2014 and raised $20 million in series A financing last year, said her company’s mobile robots “enable people to transit goods within their facilities from point A to point B without humans.” That is, without human effort, but still among humans, at places like data centers, distribution centers and factories.

Robots like these are even preparing to break out of the confines of the workplace entirely and hit public sidewalks to deliver groceries and other goods directly to customers. Starship Technologies, with offices in Estonia and the UK, showed off one of its machines at the recent RoboUniverse conference and gave attendees a rundown of its capabilities.

Starship’s robots are designed to be “99%” autonomous, according to Lauri Väin, VP of Engineering. If the machine encounters an unforeseen obstacle—for example a piece of trash blowing across one or more of its nine cameras—it is programmed to stop and wait for a human operator at a remote control center to take over. Human pilots will also help it cross intersections. The company aims to complete trials in London and Washington, DC, this year.

Not only are such robots designed to work with humans and take over their more tedious jobs, but some of them will get paid like them too; both Fetch and Starship operate on a “robots-as-a-service” business model, which has customers paying monthly fees rather than purchasing the robots outright. Essentially, robot owners are hiring them out, which, says Wise, makes them more affordable. “In many of our cases, a manager at a facility has the budget ... to start with our product without having to go to corporate.”

Far from eliminating jobs, the new robots are actually fueling a jobs boom, says the Association for Advancing Automation. In a recent paper titled Robots Fuel the Next Wave of U.S. Productivity and Job Growth, the trade association asserts that: “Today’s robotics offer manufacturers improvements in efficiency that are driving up profits and employment.” The paper plots rising U.S. employment against a rise in shipments of robots and argues “the correlation between robotics implementation and employment growth is clear.”

Universal Robots’ General Manager for the Americas Scott Mabie demonstrates how to program one of his company’s robots. Image courtesy of Michael Belfiore.

Jim Lawton, chief product and marketing officer at Boston-based Rethink Robotics, says that collaborative robots enable product designers to iterate more quickly, driving innovation. “If I [run] a factory now where I have the ability to have a bunch of smart ... robots working side-by-side with people and my goals at the top level are to reduce costs, be more responsive to customers or to iterate design more rapidly,” says Lawton, “that would enable innovation.”

As for the future, both Askey and Wise see robots that combine the best features of robot arms and mobile robots as the next frontier. Wise’s Fetch is developing a mobile stock-picking robotic arm to go with its available stock-transporting bot, and Askey’s Ascend is preparing to launch this year with a combined robotic picking and transporting solution of its own.

Existing robot arms have to be manually programmed for each task, for example picking up and placing specific objects on an assembly line. But an arm that could learn to manipulate objects of varying sizes and shapes on the fly would bring a whole new level of capability to collaborative robots. “People are good at just interacting with something and learning about it as they interact with it,” says Askey. “To the extent a robot can do that, that has big implications.”