Getting on Board with the Industrial IoT

Although the Industrial Internet of Things, or IIoT, is still in its infancy, standards and best practices for security and interoperability are already emerging. 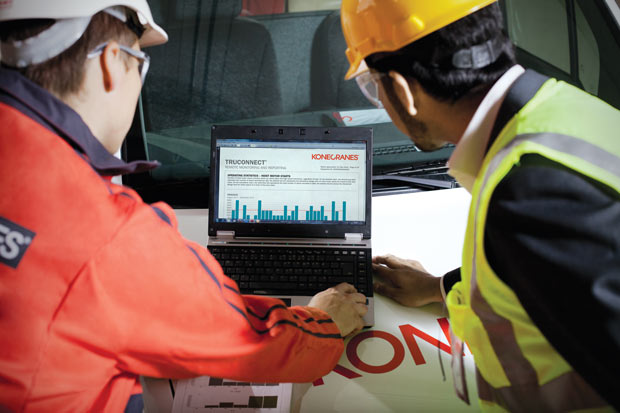 Konecranes’ TRUCONNECT suite of remote service products that connect data, machines and people via the Industrial Internet of Things.

The 10-ton cranes that moved around pieces of stamped and welded metal to be sent to an auto plant from Kalida Manufacturing in Ohio were burning through parts. Motors, switches and brakes had to be serviced or replaced every couple of months—keeping maintenance costs high and plant managers unable to figure out why. Adding to the mystery: Brand new cranes supplied by Konecranes also went through parts at an alarming rate.

Konecranes has been involved in the lift industry for more than 80 years. It now has almost 12,000 employees in 47 countries. Images courtesy of Konecranes.

But those new cranes had a feature the older models lacked: they were connected to the Industrial Internet of Things (IIoT), which meant that they continually reported operational data to a central database.

All it took was a look at that data to pinpoint the problem: Each crane was logging more than 20,000 motor starts and stops every single week. “This is basically 167 times an hour,” explains Jim Skowron, regional vice president of sales at Konecranes. “That’s an incredible amount of stress on that hoist motor.” Using the data, plant managers were finally able to trace the maintenance problem to simple operator error.

Previous generation cranes ran on just one speed; to slow one down as it was raising or lowering a part required the kind of rapid starts starts and stops the operators were doing, even though both the new Konecranes machines, and their immediate predecessors in fact, had two speeds.

Solving the maintenance problem was a simple matter of training the operators at the plant to press motor switches halfway in for a lower speed, and all the way in for a faster one. Practically overnight, the motor starts and stops were reduced by more than half. Maintenance became more of a biannual affair than a bimonthly one. And with the simple application of relatively inexpensive training sessions, maintenance costs were cut more than in half.

Konecranes’ IIoT solution, called TRUCONNECT, provides just one example of how the IIoT is transforming industry by providing never-before-achievable insight into industrial processes. Everything from manufacturing and transportation to energy production and agriculture will benefit from the IIoT revolution now underway, according to a report released by the World Economic Forum in January 2015 titled “Industrial Internet of Things: Unleashing the Potential of Connected Products and Services.”

Konecranes’ TRUCONNECT suite of remote service products that connect data, machines and people via the Industrial Internet of Things.

But significant risks also loom ahead, as increasing numbers of machines and processes going online expose themselves to the wider Internet, warns the report.

Most technologists focus on the wrong problem, Soley says of the effort to address the challenge of interoperability—that is, getting machines and other devices of different types to share data. “They focus on the middleware: How do I get the bits and bytes moved around,” says Soley. “That’s an easy problem, and it’s in fact been solved a long time ago.” The harder challenge to overcome, says Soley, is that the bits and bytes are all coming from devices of different types that use different protocols to communicate. In other words, they speak different languages.

It might be tempting to suggest the creation of a common protocol that all future devices could share, says Soley, but he cautions that this would only add to the problem. He says such a solution would simply add yet another standard to the protocol soup as manufacturers continue to support old protocols and also continue to develop new ones to take advantage of emerging capabilities. Instead, says Soley, the best solutions to the interoperability problem will be systems that can act as translators between devices using different standards.

And the best way to iron out any interoperability glitches in a given system, says Soley, is to build a testbed to see what works through testing.

AT&T, Cisco, GE, IBM and Intel founded the IIC in March 2014 to do just that. Each member company contributes expertise, personnel, and other resources in the service of developing best practices and standards for the emerging IIoT through the creation of testbeds. Even more than that, says Soley, the IIC is charged with developing entire new business models that will make even greater use of the IIoT than is currently envisioned.

For example, in February 2015, the IIC announced a track and trace testbed that Soley says will change the way factory managers manage their plants. In addition, says Soley, “it’s going to increase safety on factory floors in ways that nobody could possibly see coming.”

Another IIC testbed in progress, launched in May, is a micro-grid project designed to do for a connected electric grid what the track and trace testbed is doing for the use of the IIoT in manufacturing. As this article went to press, the micro-grid project was finishing the first of three phases and had the participation of IIC members Real-Time Innovations, National Instruments and Cisco.

Designing reference architectures and running them first in laboratory conditions and then in field trials is the best way to determine how to get disparate devices and systems to play nicely together, agrees Nick Butler, group manager for Embedded Systems Product Marketing at National Instruments.

For the first phase of the micro-grid testbed, engineers have assembled a small-scale prototype in a National Instruments lab. The setup incorporates a pair of National Instruments Compact-RIO control and monitoring systems and takes up the space of one or two desks. For Phase Two, the testbed will move to a hardware in the loop (HIL) facility for further testing and development with similar electrical loads as it would experience in actual use. The third and final phase of the testbed project, to be completed by the end of 2016, will deploy an IIoT-connected solution to an electrical substation that will bring a new level of control and monitoring to grid operators.

The standards architectures produced in the IIC’s testbeds will be available to IIC members and any organization that partners with them.

Konecranes’ motto: “Not just lifting things, but entire businesses” is supported by connections to sensors on over 9,500 of its customers’ devices, and its use of Siemens PLM Software’s Teamcenter.

Of course, all of these new things going online represent potentially many more points of vulnerability where data can be accessed without authorization or malicious code introduced.

Godfrey Chua, Principal Analyst at Machina Research, an Internet of Things advisory firm, says that his company’s research confirms that for current and potential users of IIoT-connected systems, security is one of the biggest concerns. “If we are to continue to maintain the momentum and accelerate the growth of IoT, it’s really incumbent upon the industry to address the security concerns that potential customers have.” Much of the concern among IoT users, says Chua, comes from a shortage of the expertise needed to address potential risks.

As for addressing those risks, Chua says that it’s important to look at entire IoT architectures rather than to focus solely on individual components. “The fundamental challenge of security and IoT is that if you look at any IoT solution there are many pieces,” says Chua. These pieces include the network itself, individual applications, and devices running the applications. “The many doorways through which a malicious actor may find its way into your solution just makes it harder to keep up,” he adds. For that reason, Chua recommends taking what he calls a holistic approach to security for any given IoT solution, by building security in from the start of the design process, and not to try to address it piecemeal for each piece of technology involved.

The good news, says Chua, is that the technology already exists to build secure IoT systems. The biggest impediments to IoT security that he and his colleagues at Machina Research see are errors of oversight. “It could be as simple of forgetting to implement authentication,” says Chua.

To ensure that nothing is overlooked, and because a given IoT system may touch many different business functions—including IT, operations, sales, and just about every other department of an organization—Chua envisions the creation a new executive position that would report directly to the CEO. “One of the big conversations right now in the industry is whether or not it’s time for a chief IoT officer in the organization,” says Chua.

Even with standards and best practices still emerging, the benefits of the IIoT are already clear. Biased though he may be, Konecranes’ Skowron probably speaks for many when he says: “You’d be nuts not to make sure that the equipment that you’re buying has this technology on it.”