Engineers at D-Wave Systems explain how computational simulation and modeling help them to get the job done. 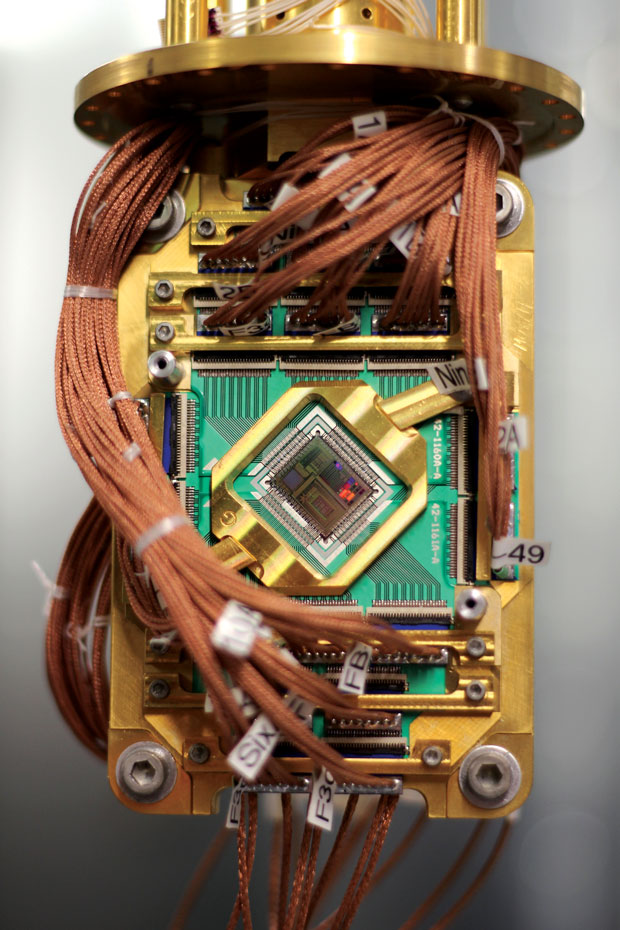 D-Wave’s quantum computer chip in the housing in which it will be cooled and electromagnetically shielded. Image courtesy of D-Wave Systems Inc.

It’s not often that you hear the phrase “superconducting integrated circuits” dropped casually in conversation, but Jeremy Hilton, vice president of Processor Development at D-Wave Systems Inc. manages to make it sound almost commonplace. The super-cooled, zero-resistance electrical circuits are his stock in trade.D-Wave is at the cutting edge of computer technology, producing computers that run on the principles of quantum mechanics. In D-Wave’s machines, which reportedly cost more than $10 million a piece (D-Wave doesn’t disclose pricing details), each quantum bit, or qubit, can register as both a zero and a one at the same time. This potentially allows for exponentially faster calculations than conventional computers.

For now, D-Wave’s machines are used for specialized artificial intelligence research by the likes of Google and NASA, and are still far from commonplace. That’s partly because of the extreme environment that D-Wave’s quantum computer chips must operate within, which adds to their expense. And engineering that environment is a major part of the challenge facing D-Wave’s engineers as they seek to improve their machines. Fortunately, they have help, in the form of computational tools from ANSYS, as well as help from ANSYS software engineers.

“For us, this is a unique application,” says Julius Saitz, Ph.D., lead application engineer at ANSYS. He says he hasn’t seen anything like it in the 10 years that he has been with his company.

The qubits of D-Wave’s computers are formed from niobium, and each encodes a so-called qubit of information as a magnetic field.

The field can be externally manipulated to create the input and output that forms the basis of calculations. The big difference between the ordinary bits of conventional computers and qubits is that qubits don’t have to choose between the two states that form the ones and zeros of computer data. Instead, they can exist in a state of superposition — that is to say — both states at once.

But the slightest disturbance can spoil the calculation. And “slightest” means even the tiniest level of electromagnetic radiation or heat. That’s why the single, 4x4mm superconducting integrated circuit at the heart of each machine must be cooled to 10 millikelvins — colder than the coldest object in interstellar space — and electromagnetically shielded so that it experiences magnetic fields of no more than one nanotesla, about 50,000 times less than that which exists in a typical room, says Hilton.

D-Wave’s quantum computer chip in the housing in which it will be cooled and electromagnetically shielded.
Image courtesy of D-Wave Systems Inc.

“Temperature,” says Hilton, “you can think of as noise. In these systems, the colder you can operate the processor, the lower the noise is, and the bigger role that the quantum mechanical effects will play.” The circuits at the heart of the D-Wave chip, says Hilton, become superconducting at about 9 kelvins, but even colder is better for measuring those minute magnetic fields in the qubits through any background noise.

“The binary information that we’re representing and then processing you can think of as little magnetic dipoles. They’re like tiny little magnets,” says Hilton. But magnets are sensitive to magnetic fields around them, driving the requirement for electromagnetic isolation.

Hilton says that best practices already existed for extreme cooling and electromagnetic isolation before D-Wave came along in 1999, but D-Wave’s operating environment is larger and more complex than is required in typical laboratory settings. That thumbnail-size chip, for example, is considered large for a superconducting environment.

Complexity is also introduced by the D-Wave quantum chip’s need to be controlled by conventional computers that can be programmed outside of the D-Wave refrigerator. The output of the chip is also read and displayed by the conventional computers. The interface between the classical and quantum worlds takes the form of control lines running from the quantum processor to the conventional electronics. “Those control lines are coming from room temperature,” says Hilton, “where room temperature electronics are generating the signals that we need to get on to the [quantum] processor to control and process information.”

Engineering that highly specialized environment becomes ever more challenging with each generation of chips. The denser and larger the chips become, the more sensitive they are to electromagnetic fields. And as complexity of both the chips and their operating environment increases, so too does the importance of precisely quantifying the environment. “The more we can understand what that volume looks like, the more flexibility it gives us from an engineering perspective to optimize the packaging that the payload [i.e., the chip] is going to go into,” says Hilton.

Increased flexibility could lead to more chips in the same cooled and shielded volume, for example, or more options for integrating the control lines that come in from outside the environment.

External housing for the D-Wave computer. The refrigerator used to cool the quantum computer chip comprises most of the volume. Image courtesy of D-Wave Systems Inc.

To refine the operating environment further for the new chips, the D-Wave team relies on software modeling and simulation tools from ANSYS along with experimentation. Until recently, the team has leaned more on experimentation than simulation, but experimentation gets expensive. “We’ve done a lot of experimentation,” says Hilton. “Now we need to really engineer this more seriously, and so it’s time to partner with ANSYS and their products and see what we can learn using some powerful software.”

In February, Hilton and his team reached out to ANSYS for help in modeling the environment inside the D-Wave machine. The ANSYS Maxwell product became their weapon of choice for conquering the challenge of precisely modeling the magnetic fields at play around the D-Wave chip, and for informing the design of the electromagnetic shielding around it.

Saitz, who has been working with the D-Wave engineers, notes that ANSYS Mechanical is also an important tool for this application. “The modeling that they requested and we demonstrated was a combination of Maxwell and ANSYS Mechanical,” he says.

The two packages work together to characterize the D-Wave chip’s operating environment as the circuits within the chip become superconducting in response to the temperature dropping in the refrigerator that houses it. ANSYS Mechanical simulates the changing properties of the chip over time and passes that data to Maxwell, which models the changing electromagnetic field. “When the material properties change, then the magnetic field results are different,” says Saitz.

At the same time, the changes in the magnetic field also affect temperature. “If there is a change in magnetic field, that will induce currents in any conductive material,” says Saitz. The currents, in turn, can result in the generation of heat, the effects of which the D-Wave engineers want to minimize as much as possible. Simulating these interactions in detail helps the engineers reduce the number of costly experiments they have to make.”

The D-Wave team is also using the ANSYS HFSS package for high-frequency modeling of the processor. “We work with very high frequencies in our readouts so we can extract information from the processor as quickly as possible,” Hilton says.

Saitz cites the tight coordination between the software packages as one advantage to using a single software developer for all of them. “The whole simulation process is streamlined under an environment we call Workbench,” he says.

Hilton and his team run these memory-intensive simulations on Linux-based servers with 512GB of RAM onboard and that are dedicated to the task at D-Wave’s headquarters in Burnaby, British Columbia. Big jobs typically run overnight, with some occasionally running for two days.

In the near future, the team also plans to use ANSYS software to model the thermodynamics of the refrigerator structure and determine how the metal in the refrigerator generates thermal currents as it cools.

All of which should help D-Wave scientists and engineers build more complex chips at a faster pace. D-Wave’s first-generation chip used 128 qubits to process data. The current generation chip uses 512 qubits, and the next generation, chip, due on the market within the next year, will be a 1,000-qubit processor. Hilton and his team are now working on a fourth-generation chip with a whopping 2,000 qubits that he hopes will help revolutionize the field of machine learning.

“The whole field of machine learning is very hot right now. It’s moving rapidly, but because of the limits of classical computing, in order to scale and do more, the algorithms are tending more towards keeping the underlying models as simple as possible,” says Hilton. “With D-Wave, what we’re saying is: Let’s go back to that core model and add some complexity to that model that classical algorithms are having to throw out. And now that we can solve those problems, what does that mean for learning?”

There’s only one way to find out.