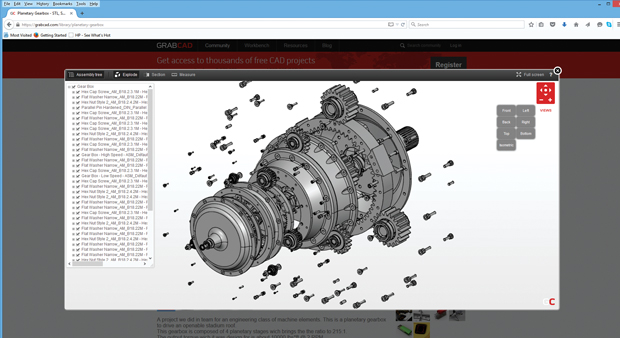 The 3DXCommunity from TraceParts Inc. not only provides a wide selection of parts from suppliers, it also regularly holds design contests for its users.

Sam Wurzel, cofounder and CEO of Octopart would love to see the name of his company become a household word synonymous with searching for electronic components online. He said: “People now say ‘Google it’ to look up something. All design engineers might one day say ‘Octopart it’—some already do.” If it were up to Bob Noftle, president and chief evangelist of TraceParts Inc. U.S.A., engineers would say “TraceParts it.”

Xerox and Google are among the few companies whose names became transitive verbs due to their pervasive influence. The use of data and content from catalog aggregators like Octopart and TraceParts Inc. is certainly pervasive in design engineering, but they’re often integrated deep inside CAD and PLM (product lifecycle management) programs, so their brand recognition may not rise to the same level as a Xerox or Google.

When design engineers migrated from the drafting table to CAD, paper-printed part catalogs became dead weight and doorstops. Today, the standard approach to specify a part or component in a project is to search for it online and insert it into a 3D assembly. For a time, CAD models, part numbers and costs were all the data required from part catalogs. But the engineers’ increasing reliance on digital prototypes for simulation and compliance demands more data from part suppliers. The Yelp and Amazon generation’s desire to rate products, post reviews and read comments also demand a new interface for delivering standard parts. To satisfy these changing needs, part catalog vendors may have to adopt certain characteristics of the online 3D user communities.

Downloadable Models Are in Demand

The two basic characteristics of digital part catalogs that make them a much better alternative to paper catalogs are interactive 3D previews and downloadable 3D models. “First, engineers can get a pretty good idea that the part is what they’re looking for by seeing a viewable 3D model. Second, they can give it a quick once-over and make sure the model doesn’t have any gross errors. It’s a comfort to the designer that we’re willing to show the model before they spend time downloading the data,” says Jeremy Purcell, applications engineer at Digi-Key.

The growing need for these digital catalogs is in part due to the expansion of more compact, complex devices. “In the past, engineers could work with just the specs of the electrical components. But as the product form factors begin to shrink to become wearable devices, the 3D models of the components become increasingly important. With these devices, clearances are tight, heat dissipation is a major concern, and merging electronics and mechanics is necessary. So the 3D models are important,” says Octopart’s Wurzel.

But the CAD models may not always be available, not for a lack of effort among the catalog aggregators. “Some component manufacturers who are early tech adopters put in efforts and resources to create 3D CAD models of components. But many are not there yet. So some users—design engineers—are beating them to the punch,” Wurzel says.

The long-lasting format war also complicates the delivery of downloadable parts. “I wish there was some mandate for a standard format, but the truth is, CAD vendors compete to steal seats from one another, so they want to protect their formats,” says TraceParts Inc.’s Noftle.

But there are interoperable options available. “STP, IGS and PDF are the hot formats now. We do know there are many formats out there, but these three seem to be shaping up as the preferred options. In the future, there may be a more universal format created but we have not seen any clear option yet,” says Purcell.

At the website explaining the requirements for REACH (Registration, Evaluation, Authorization, and Restriction of Chemicals), the European Chemicals Agency curtly warns: “No data, no market.” The responsibility, it declares, is “on industry to manage the risks from chemicals and to provide safety information on the substances.”

For design engineers assembling new products out of a mix of custom-designed parts and catalog parts, green facts and environmental data are now more important than ever. They can be the deciding factor in a product being rejected or approved for sales in the target region.

Aggregating content from more than 650 suppliers, Digi-Key delivers 3D models of components from Mentor Graphics, Xsens, Advantech, Samsung Electronics and other suppliers as 3D models “We are in many EDA (Electronics Design Automation) and CAD software since we have worked very hard to normalize and compile as much data on our parts as we can get. It takes a lot of effort to present the data from each manufacturer in the same context with an organized method,” says Purcell.

Some of the data collected may be critical to those who want to conduct simulation at the assembly level. “Data for electrical test and simulation is getting better. Some manufacturers offer 3D models and a few offer SPICE models (for Simulation Program with Integrated Circuit Emphasis). But most parts from manufacturers are basic symbol and footprint data, which does not aid in simulation or testing,” Purcell says.

Before he launched TraceParts Inc., Noftle helped launch SolidWorks 3D Content Central. In doing so, he noticed that most activities associated with user-contributed content were fueled by those creating and uploading component models they couldn’t find. “When the users go to a supplier’s site to download the model, they get a certified, supplier-sanctioned model. But if the model is not available, they might create the model themselves based on the supplier’s reference materials and share it with others,” he says.

This experience convinced him to make his new venture TraceParts Inc. a hybrid portal, housing both supplier models and user-created models. Noftle and his colleagues also offer digitization services to suppliers who do not have the resources to create their own 3D models.

User-created content on TraceParts Inc.’s 3DX portal is not strictly for pragmatic needs. It also has a lot to do with fun, friendly competition and bragging rights. Frequently, users try to outdo one another by showing off their modeling skills with complex spacecraft and alien creatures sculpted out of their favorite 3D packages in their own free time. TraceParts Inc. encourages this by holding regular design contests.

At GrabCAD, owned by global 3D printing and additive manufacturing solutions provider Stratasys, a thriving user community coexists alongside an online collaboration product called GrabCAD Workbench. “Users may find inspiration from a community project and decide to incorporate elements into their own design. We ask that people downloading from the community request the uploader’s permission for any commercial applications,” says Lindsey Christensen, director of Marketing at GrabCAD.

Regular design challenges are a well-known feature of GrabCAD. They give members a chance to flex their modeling muscles and win prizes, sometimes leading to paid assignments and contracts. “We’ve launched many exciting new design challenges in just the last few months: the Veteran’s Association sponsored a challenge to design accessories for prosthetic limbs; the Stratasys Aerospace Challenge is bringing additive manufacturing to satellite design; and we’ve worked with repeat sponsors like GE, NASA and many others,” says Christensen.

Digi-Key’s Purcell said: “If an engineer can find a source with quality parts that meet their needs, I think there would be no hesitation to use both [manufacturer-supplied models and user-created models]. Several companies and websites have gained popularity, even so much that manufacturers have now been utilizing them to create content. Accelerated Designs and SnapEDA are examples.”

Working with user-created models downloaded from a public source is a double-edged sword. On the one hand, it saves time because someone has gone through the trouble to create the 3D model. But GrabCAD’s Christensen cautioned: “As with anything, an engineer should do their due diligence and inspect any part they plan to incorporate for production.”

These user-created models may also not be as verified as others. “Usually supplier models have been checked for form, fit and function. User-created models should be the last resort, because the accuracy of the model is only as good as the author wants it to be,” Noftle says.

The ever-changing counter at GrabCAD’s home page shows that, as of early August, the site is home to 2,280,000 engineers and 890,000 models. The site originated as a place for 3D software users to network, exchange tips and share content. It launched in August 2010 and reached a milestone in Christmas 2011 when it logged its 1 millionth download. The vast pool of active, engaged 3D users on GrabCAD is a tantalizing market for component suppliers and vendors.

GrabCAD’s Christensen revealed that the company has been approached by many part suppliers who want to offer their content to the community. “The community currently consists entirely of user-created content. Including standard parts isn’t something we’ve ruled out for the future. But we are not currently partnered with anyone,” she says.

Member activities on GrabCAD are also fueled by Yelp- and Amazon-style peer reviews and comments. The social media-inspired features from the online community are carefully observed by component syndicators like Octopart, Digi-Key and TraceParts Inc. But, adopting a standardized rating system or allowing comments may prove challenging.

“What would work for one engineer may not meet another’s expectations. Company engineers don’t want to take the time to explain why and how parts don’t meet their needs and the companies don’t want their proprietary info pushed out to communities. In the end, everybody has different needs and many of the parts are very complex, and won’t work with a one-size-fits-all rating system,” says Purcell.

Wurzel agrees a rating system presents a challenge. “We have 30 million components in our database. Some components are very similar to others. They may only differ in their package sizes or temperature ranges. Some parts are used in such a niche market that the volume of reviews could never reach critical mass,” he says.

Nevertheless, he believes a peer-review system or user-rating system is worth considering. “As a society, we are being conditioned to rely on crowd-sourced judgment and wisdom. The same expectations are spilling into the professional transactions. For younger engineers, it’s second nature to use these reviews. Maybe it makes more sense to let people leave comments on certain component classes, not for specific components,” Wurzel says.

Some suppliers prefer to hide the material data and internal structure of the component because they offer competitive advantages, containing clues on how the part is put together. But for engineers who wish to perform advanced structural analysis and study thermal behaviors of their products, the data is essential to make accurate predictions about part performance, wear and tear over time, breakage and failure. The tug-of-war sometimes puts the content aggregators in the middle.

In order to get more data available, transparency from suppliers is needed. “[Rich data for simulation] will be the next evolution in manufacturers’ offerings. Engineers keep pushing for more information on all aspects of the parts; manufacturers have it because they had to run tests on the parts to put the info in the datasheets. The challenge is to convince the suppliers to provide the data,” Purcell says.