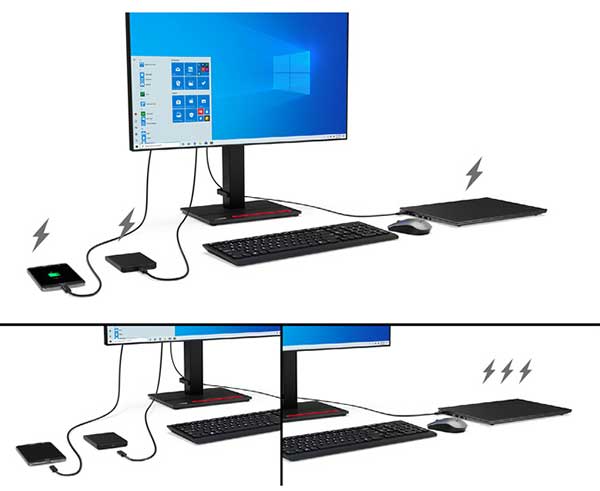 Workstation monitors are starting to use USB-C as their primary connection technology, allowing the monitor to become a connectivity hub. Shown is the Lenovo ThinkVision P27H. Image courtesy of Lenovo.

As working from home is more common with product engineers, companies and employees are taking a fresh look at what constitutes a productive work-from-home workstation. This evaluation suggests that the monitor should no longer be an afterthought. The new wave of workstation-class monitors are recognized for their ability to improve ergonomics, increase user productivity and improve the connectivity dynamics of having more than one work environment.

Bigger Can be Better

Research has confirmed the increased productivity of using multiple task windows, whether with single- or dual-monitor configurations. In a Wichita State University study, participants were first assigned tasks to do on a dual-screen setup, then moved to a single 17-in. screen for similar tasks. By the end of the study participants “were often observed to show disappointment” when asked to use the single monitor.

A similar study at the University of Utah showed a 44% productivity increase for text tasks and a 29% increase for spreadsheet tasks, when moving from a single screen to a dual-monitor arrangement. In a Georgia Institute of Technology study, participants were able to complete tasks nearly 2.5 minutes faster using a dual-monitor setup. If one employee gains 5 minutes per hour doing such tasks, that adds up to an hour a day per employee.

“Our studies have found that in some cases productivity can be increased by 50% or more with multiple monitors,” comments Jon Peddie, president of JPR. “Realism and the details revealed with more display area not only improve understanding in a visualization, but increase enjoyment. It’s tiresome to have a constrained view of the world; it’s like looking at the world through a tube or a pair of binoculars.”

There are also vendor-hosted studies. A new study from Dell measures the productivity of attaching a second monitor to a notebook system. “Give a notebook user a flat 27-inch monitor and their productivity improves 38%,” says Vinay Jayakumar, a Dell product consultant for commercial displays.

In the same study, Dell measured the use of a curved screen as the second monitor for notebook users. A 34-in. curved monitor offered a 42% increase in productivity. 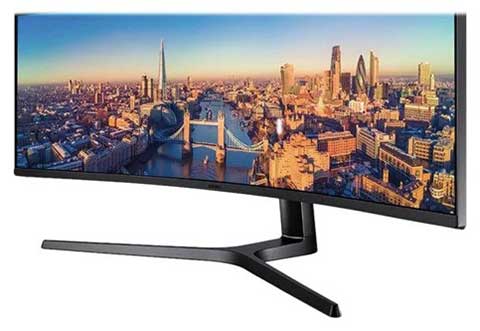 Samsung is one of several vendors with new 49-in. curved monitors designed for workstation use. One widescreen curved monitor replaces the need for two or more flat monitors. Image courtesy of Samsung.

“Curved monitors reduce eye movement,” Jayakumar notes. “Yet, the panoramic view is different from the flat view from a distance,” he adds, which suggests the decision between a flat or curved screen as a second monitor for a notebook computer depends on intended use.

“Our studies have found that in some cases productivity can be increased by 50% or more with multiple monitors.”

Specifically, there was increased insight into user data, decreased stress and more time spent on primary tasks. The study concluded, “The ability to see more of one’s data reduces user stress as this utilizes more external memory—the monitor—and less cognitive memory. Just as writing a list down on paper can relieve the burden of remembering the information—which frees the mind up to perform the task as hand—having a larger monitor enables people to access more information at once and thus to focus more energy on solving the problem as opposed to remembering facts. In addition, increased display space can enable users to retain greater amounts of data in their long-term memories.”

Pepperdine’s productivity research cited was based on HD displays. Now 4K monitors are the industry standard. 4K has four times more pixels than an HD display, and the difference is noticeable.

Now all CAD vendors directly support 4K, and “the results are spectacular; once you use 4K for CAD, it is impossible to go back to HD,” says Payne. “Everything looks so much sharper, diagonal lines in particular.”

Two specific monitor panel technologies compete in the marketplace, in-plane switching (IPS) and twisted nematic (TN). The vendors we interviewed for this article all agreed that IPS is preferred for engineering and other technical graphics applications.

TN offers faster response times, which gamers like, but IPS offers better color accuracy, color contrast and viewing from a wide field. The speed difference between IPS and TN is approximately 5 to 6 ms. As Payne notes, “Six milliseconds is nothing in CAD use.”

“Given the pandemic and working from home, USB-C connectivity is a phenomenal piece of tech added to workstations and laptops.”

Lenovo is noticing increased interest in a third monitor technology. Vertical alignment (VA) is a type of LCD panel characterized as having improved image contrast and image depth.

“It offers the benefits of IPS, and is an improvement on TN,” notes Brandon Smith, the visual experience product manager at Lenovo. Smith says Lenovo is now offering a 44-in. curved VA display for engineering workstations, meant to replace two 24-in. displays.

USB-C is a Game Changer

It is typical today for workstation-class monitors to come with USB-C connectivity. USB-C technology allows for one single cable to provide audio, visual, data transfer and electric power.

“Our vision is that the monitor is the hub,” says Dell’s Jayakumar. This allows for the mouse, keyboard and an [external] solid-state drive to be hooked to the monitor, instead of the computer. “It makes for a clutter-free environment,” he notes.

Engineers setting up a work-from-home workstation do not have the luxury of an IT specialist; “investing in USB-C enables simplified setup and easy transition between mobile and workstation computer,” adds Jayakumar. Using USB-C has the added benefit of charging the notebook computer when the monitor becomes the new docking station.

“USB-C is a game changer for connectivity. Audio-video-data power is a revolution for the industry,” Jayakumar says.

“Given the pandemic and working from home, USB-C connectivity is a phenomenal piece of tech added to workstations and laptops,” adds Lenovo’s Smith, who has a USB-C monitor as the center of his work-from-home workstation. The ability to connect devices and charge from the monitor “will not only save space on a user’s desk, but will also improve productivity.”

Smith warns that available wattage in USB-C connectivity in workstation monitors is an issue buyers should consider. The USB-C specification is 100W, but “many monitors support less, down to as low as 15 watts or so,” says Smith.

If a notebook workstation includes a large (or dual) graphics processing unit, there might not be enough electrical power from the monitor to fully support use and charging. “We are serious about lots of wattage in our monitors,” he adds.

A Return to Ethernet

To save space many workstation notebook computers have eliminated an ethernet port, allowing connectivity only using Wi-Fi. Yet workstation-class users often prefer a faster ethernet connection when available.

Smith says Lenovo, like other vendors, is starting to add an ethernet port to its workstation-class monitors. The combination of USB-C and ethernet in a monitor “is a trend that will continue, as vendors offer more supportive options for work-from-home settings.”

All the vendors we interviewed say they often receive questions comparing dedicated monitors with flat-panel TV screens. “TVs have input lag,” notes Orbital Computers’ Payne. “They are not built for interaction but for streaming signals.” In addition, Payne says the larger TVs also cause eye fatigue. For daily work, Payne says a 24-in. HD monitor is better than a 55-in. 4K television. “The 4K TV would be OK in a conference room, but not for dedicated one-person use.”

Another way monitors differentiate from TVs is their ability to control visual elements of interest to workstation users. Some vendors are adding the ability to manage the amount of blue light the screen produces.

“Blue light is a primary culprit in eye comfort,” says Lenovo’s Smith. Most workstation vendors offer monitors that can be calibrated for 3D or 2D CAD work. 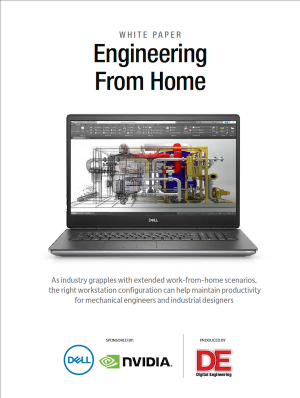 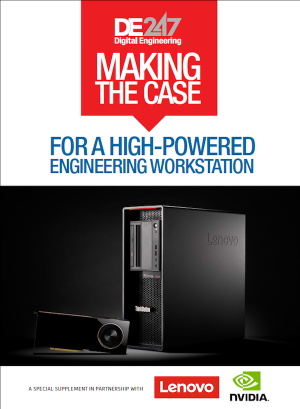 Making the Case for a High-Powered Engineering Workstation
The new Lenovo ThinkStation P620, combined with the powerful NVIDIA RTX A6000 GPU, can take engineering productivity to the next level.
Sponsored Content
Editor’s Pick: CPU Replete With 64 Cores
The company says this newest Threadripper is equipped with abundant storage and memory capacity, and vast expansion capabilities.
A Perfectly Portable Pair: Lenovo P1, X1 ThinkPads
These latest P-series laptops provide a great combination of performance, portability and price.
When Engineering Exits the Building
Organizations must find the right technology to support engineers’ data-intense workloads as work-from-home numbers increase.
PODCAST: Shutdown’s Impact on Workstation Purchase, Electronics Manufacturing
Lenovo and MacroFab discuss mobile workstation sales and PCB production during the new normal
Editor’s Picks: July 9-14, 2020
One of the picks will be chosen as DE’s Editor’s Pick of the Week.
Lenovo Company Profile