The Beginning of AI Rendering in CAD 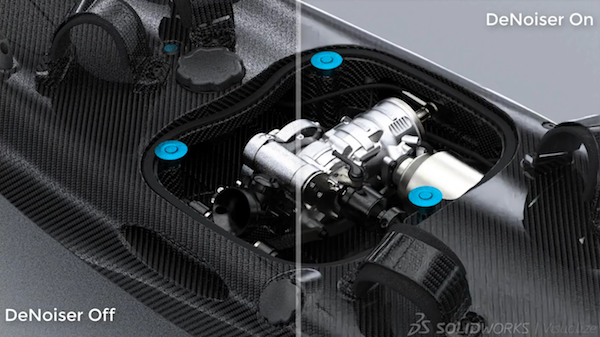 With the GPU-accelerated denoiser turned on, the rendering in SOLIDWORKS Visualize resolves much quicker. Image courtesy of SolidWorks.

Improve Structural Performance of Products
Product developers are under pressure to develop and deliver innovative new products in shorter amounts...

At first, a graphics processor with inherent AI processing features seems like overkill for product design and visualization. AI, or artificial intelligence, belongs to the realm of autonomous carmakers, advanced robotics, and data scientists. What would an average product designer do with it? If you’re running SOLIDWORKS CAD on a specific type of workstation, you might already be benefiting from it without doing anything.

One year ago at SIGGRAPH 2018 (August 12-16, Vancouver, Canada), the annual gathering of computer graphics professionals, NVIDIA CEO Jensen Huang raised the possibility of “AI-assisted ray tracing” as he unveiled a new generation of GPUs with RTX technology. 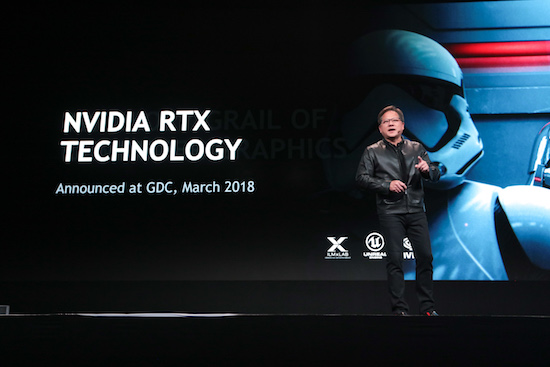 RTX “uses ray tracing, deep learning, and rasterization to fundamentally transform the creative process for content creators and developers through the NVIDIA Turing GPU architecture and support for industry leading tools and APIs,” according to NVIDIA. The technology is part of GPU maker NVIDIA’s GeForce product line, targeting the gaming market, and Quadro, targeting the professional market.

Ray tracing is an essential component in producing physically accurate renderings. By calculating the path of light bounces at the pixel level, the technology faithfully duplicates the light reflections, shadows, and refraction effects seen in the physical world. This makes ray traced 3D visuals a reliable substitute for the real products in design reviews.

But it’s also a memory-hungry, compute-intense process, often pushing professional GPUs to the limit. The introduction of AI-accelerated ray tracing promises to change that. In SOLIDWORKS 2018 SP3, users got a new feature in the visualization environment called SOLIDWORKS Visualize. The Denoiser is an AI-driven raytracing option that you can turn on or off. Turning on this feature lets you take advantage of the RTX GPU in your workstation to speed up your ray-traced visuals.

“This AI Denoiser allows Visualize to anticipate and magically eliminate noise in your scene,” says Brian Hillner, portfolio manager at SolidWorks in a company blog post (“Introducing the New Artificial Intelligence Denoiser,” February 2018). “You can expect the same photo-quality results 10x faster!! Not only does it help your final renders finish 10x faster, you can also enjoy this dramatic speed-up while preparing your Visualize scenes as well.”

As the appetite for AI-driven denoising grows, designers and engineers can expect to see it appear in their own favorite modeling and visualization program. In addition to SOLIDWORKS, the NVIDIA denoiser is also incorporated into the V-Ray renderer from Chaos Group. “We’re finding the NVIDIA denoising results to be very impressive on interactive scenes, giving [users] a much quicker estimate of what their final result will look like,” said Vlado Koylazov, founder of Chaos Group.

With ray tracing, whenever the scene changes or shifts perspective, the renderer has to recompute the light bounces. Midway in the process, while the pixel-level calculation is incomplete, the image shows a lot of “noises”—unsettled pixels that haven’t found their right places yet, in a manner of speaking. NVIDIA has, through machine learning, developed a way for the AI to make educated guesses on where such pixels will most likely end up; therefore, its GPU-driven denoising algorithm can fill in the gaps without waiting for the ray tracing to complete. The technology is expected to be integrated into the GPU-accelerated rendering and visualization programs available from NVIDIA partners such as Autodesk, Dassault Systemes, Chaos Group, and Foundry, among others.

At the conceptual design phase, where designers are more concerned with the general look of the product, AI-driven denoising is an effective way to churn out design variants and iterations for assessment. In the subsequent phases where accuracy matters more than speed, you may turn off the denoiser to render the scene in the normal fashion to get a higher degree of fidelity, to make sure every reflection or diffusion is exactly how it would appear when the same product is manufactured.

Workstations with AI-accelerated GPUs are provided by NVIDIA partners such as Dell. The latest lineup of Dell Precision workstations announced in May includes models equipped with NVIDIA Quadro RTX GPUs. The RTX GPUs feature Tensor Cores, which provide new levels of AI performance by accelerating matrix operations. The technology provides a massive increase in efficiency. 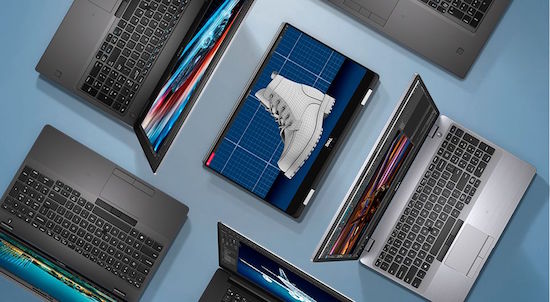 AI-accelerated ray tracing is made possible in workstations like the Dell Precision 5540 (pictured), 7540 and 7740, which are equipped with NVIDIA's RTX-enabled Quadro GPUs. Image courtesy of Dell.

Like all Dell professional workstations, they come with the Dell Precision Optimizer, which dynamically configures the best combination of CPU, GPU, power consumption, and memory allocation for the application you are running. The optimizer has preconfigured settings for ISV (independent software vendor) applications. It uses machine learning to analyze your usage patterns and tweak the configurations to improve overall system performance.