Taking a Page from Nature

GE Additive and Shell leveraged metal AM to rethink a large, complex conical part for an oxygen hydrogen micromixer.

GE Additive and Shell leveraged metal AM to rethink a large, complex conical part for an oxygen hydrogen micromixer. 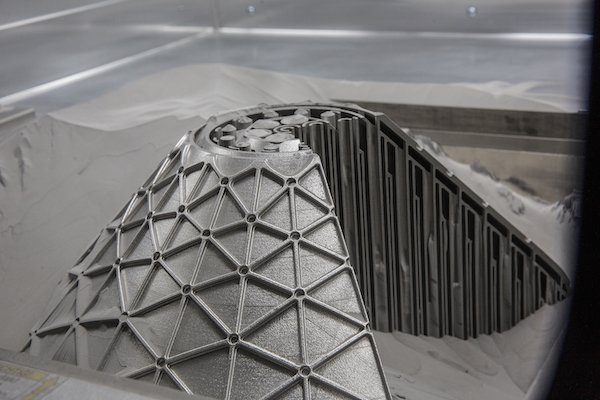 Save Time and Reduce Costs with NoSupports™ Metal Printing
Metal 3D printing is a high energy process in which it is possible for unmanaged...

Picture, if you will, what pollen grains look like as they form in a flower head. As hard as that image is to conjure, try thinking it has anything in common with something as hardcore as a micromixer—a critical component typically found in furnaces that melt scrap metal or within refinery turbines.

Yet a flower heads and petals served as the inspiration for a radically new design for an oxygen hydrogen micromixer that partners Shell International B.V. and GE Additive came up with to test the mettle of additive manufacturing.

The project came about when AM experts at Shell’s 3D printing Center of Excellence (CoE) and workshop, housed at the Energy Transition Campus Amsterdam (ETCA) in the Netherlands, decided to put GE Additive’s M Line metal 3D printing solution through its paces. The M Line is a modular system that physically decouples the Laser Processing System (LPS) and the Material Handling Station (MHS) and is specifically created for production-grade metal AM. The goal of assignment was to apply AM to reimagine a large, complex part, incorporating channels that would be difficult to manufacture with conventional production methods and that would be a test of what was possible on the M Line system.

GE Additive’s AddWorks team based in Munich was tasked with the design initiative. The requirements called for the part to be large, complex, and incorporate channels for hydrogen and compressed oxygen with a mandate to take advantage of the design freedoms afforded by AM to fully rethink the structure and part shape. The team settled on the micromixer as the target part for redesign—a component that is typically cylindrical when conventionally manufactured to accommodate the complex layout of tanks, pipes, and nozzles.

“For additional complexity, we chose a large conical design and also moved from a flat to a curved structure with an ISO grid to increase the overall strength, rather than a customary flat one,” said Sonali Sonawane Thakker, a lead design engineer at GE Additive AddWorks, in a press release. “With over 330 individual nozzles to incorporate in a circular pattern, I took inspiration from the ways pollen grains form in a flower head. The curved wall and the conical shape also reflects the shape of a petal.”

Once designed, a non-functional, demonstration micromixer part was printed in nickel alloy 718 on a GE Additive Concept Laser M Line system at Shell’s 3D Printing CoE. The build of the part, the largest and most complex parts produced on the M Line to date, took around nine days to complete.