SWW17: From “Design and Validate” to “Optimize and Manufacture” 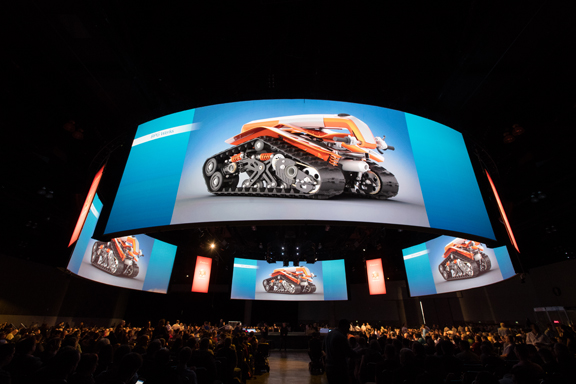 The stage is set for Solidworks World 2017 (image courtesy of Solidworks).

Dassault Systèmes Joins the Global Enabling Sustainability Initiative
Dassault and other GeSI partners will collaborate to identify opportunities and develop effective solutions for...
Siemens and ASME Announce Innovate for Impact: Siemens Design Challenge Winners
Teams from Colombia, Uganda and the U.S. selected for innovations that meet need for...
FREE WEBINAR: Can AI Algorithms Design Better Than Humans?
The Cloud’s Impact on AI and Machine Learning
FREE WEBINAR: Can You Remain Productive in the New Normal?
Collaborating Remotely through the Cloud
More Design

The stage is set for Solidworks World 2017 (image courtesy of Solidworks).

About ten minutes into his keynote at Solidworks World 2017 (Feb 5-8, Los Angeles, California), Solidworks CEO Gian Paolo Bassi faced a deadly and dangerous question. It came from not the press but the illusionist Justin Flom, part of the conference’s opening act.

“Here’s the question of the day,” Flom said, as he shepherded Bassi toward a mechanical contraption with a giant buzzsaw. “Would you trust your life to something made with SOLIDWORKS?”

Bassi predictably said, “Yes.” Soon, he found himself kneeling in front of the moving saw, with his head locked in its path.

Thankfully, the magic act worked; so did the machine. Bassi walked away with his head intact to continue his speech. (You can watch the act and the keynote in the archived videos of the live stream.)

Flom and his partner Tim Clothier from Illusion Projects INC work with SOLIDWORKS mechanical 3D CAD software to design and build their many indescribable set pieces. One of their clients is the celebrity magician David Copperfield.

“Working with David is a fascinating experience,” said Clothier. “His needs are unique. His ideas are intense. David and his director of design have an attention to detail that’s second to none. In order to take David’s sketches and translate them into accurate CAD, we installed [SolidWorks] eDrawings on David’s personal iPad and at the backstage at the MGM. This allows him to follow the updates and make changes in real time.”

The CAD software industry is now embracing a new kind of magic-like process, dubbed optimization. The question that SOLIDWORKS users—and the CAD community at large—must soon confront is, would you trust your project to something designed by optimization algorithms?

“Today, we expect the computing platform to anticipate your design goals,” said Bassi. “This is why we’re introducing topology optimization in SOLIDWORKS, in collaboration with our world-class engineers from SIMULIA [the company’s simulation software brand] ... The era of design and validate is about to end. We’re entering the era of optimize and manufacture.”

The Era of Optimization

According to Kishore Boyalakuntla, Solidworks senior director of product portfolio management, the optimization technology embedded in SOLIDWORKS desktop version is developed internally. The company has not yet determined its pricing.

A similar function dubbed design guidance will be available in SOLIDWORKS Xdesign, the browser-based design software under development. The pricing for Xdesign is not yet determined, but it’s safe to assume that, following the tradition of browser-based software, Xdesign will be affordably priced via subscription.

“Today, there are some customers test-driving Xdesign,” revealed Boyalakuntla. The package will be more widely available for trial in Q3 of 2017, he estimated.

Traditionally, engineers conceive what they believe to be the best shape for a product, then use simulation technologies to validate their idea—design and validate, as Bassi put it. But algorithm-driven optimization introduces a new paradigm. With optimization tools, engineers can specify the loads, stresses, and pressures anticipated in the design, then let the software generate mathematically optimal geometry. The proposed method—going from optimization to manufacturing—speeds along product development dramatically.

The new approach also asks engineers to put their trust in the software’s optimization algorithms. For many traditionalists, it may feel like putting their reputation and career on the line. Experts suggest it’s not exactly blind faith, because you can use various means to double-check the software-proposed geometry’s integrity. (For more, listen to the archived panel discussion on optimization here.)

Meta, a Solidworks partner, brought its AR headsets to the exhibit floor for visitors to try out. Bassi got a preview of it before the show.

“At Solidworks, we’re constantly thinking about what is next. Next is about changing the way you look at [cars]—for example, through the lens of augmented reality (AR),” said Bassi. “Of course,[the AR headset] has sensors, so it knows your position. With it, you can enter the [virtual] car, and have an illusion of checking out its interiors.”

During the second day’s keynote, Suchit Jain, Solidworks VP of strategy and community, said, “We’ve been working with our partners NVIDIA, Lenovo, and HTC Vive to bring AR/VR to SOLIDWORKS users.”

Sid Palaniappan, Solidworks senior manager of graphics R&D deployment, said, “Normally, you’d work with your keyboard and mouse, but now, with the click of a few buttons, you can connect a HTC Vive device to your SOLIDWORKS software and enter the world of VR.”

Donning a VR google, Palaniappan went on to demonstrate how you could inspect a full-scale 3D truck model (designed by SOLIDWORKS user Resemin) in a VR setup. “You can see the tremendous scale of the model,” he noted. “Just the tires alone are about my height.”

A Solidworks World attendee tries out VR experience in a partner’s booth (image courtesy of Solidworks).

Most ERP (enterprise resource management) and CRM (customer relationship management) software has migrated to the browser-run, subscription-based model nearly a decade ago, but the conservative mechanical design industry largely held out. However, there are clear signs of thawing.

On the second day’s keynote, Jain announced that SOLIDWORKS trial can now be conducted in the cloud, without downloading the GB-size installation file. The online SOLIDWORKS trial is offered through My Solidworks portal. The site is populated with self-paced training materials and tutorial videos.

Currently, SolidWorks doesn’t offer its flagship mechanical package SOLIDWORKS as SaaS (software as a service). It’s sold as a desktop software. Therefore, those who want to run it in the cloud may work with partners like EpiGrid or Fra.me to run the product from virtual machines, hosted in private or public cloud infrastructures. But things can change in the future.

Boyalakuntla said, “There’s no reason why [cloud-hosted SOLIDWORKS] cannot be a commercial offer. When the cost is right and the structure is right, you might see it ... The fact that we’re now offering the software for evaluation in the cloud tells you that we’re confident of its performance.”

Newcomers like Onshape, founded by former Solidworks employees, have proven that browser-based CAD is both technically and economically feasible. It puts pressure on traditional desktop CAD software developers to offer browser-based alternatives.

SOLIDWORKS experience is one of the widely listed skills in engineering job listings, along with AutoCAD skills. The evolution of SOLIDWORKS software—from how it incorporates optimization and AR/VR to how it performs in the cloud—is a good barometer for where the engineering and manufacturing sectors are heading.

Looking at Bassi’s participation in the onstage magic act as a clue, we may conclude SOLIDWORKS is taking some calculated risks to move ahead.