Stratasys Advancing AM With New Solutions for Factory Floor 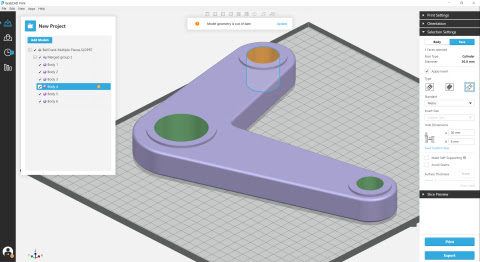 Stratasys has unveiled a range of new solutions for additive manufacturing on the factory floor, announced during RAPID+TCT 2018 in Fort Worth, TX.

Announcements include an expanded number of 3D printers compatible with carbon fiber composite material, including the new F900 Production 3D Printer, the third generation of the company’s flagship FDM system. Features include an MTConnect-ready interface with production-ready accuracy and repeatability, the company reports.

The F900 is built on the Fortus 900mc platform and is available in a new series of three solutions: the F900, the F900 AICS (Aircraft Interiors Certification Solution),and the F900 PRO.

The following two versions of the F900 extend the platform into a series of specialized products supported by high repeatability:

Owners of existing Fortus 900mc systems can upgrade to any of the three current F900 systems.

In addition to Nylon 12 CF being offered on the Fortus 900 and 450 systems, Stratasys Direct Manufacturing is also now offering parts built with FDM Nylon 12CF, ideal for functional prototypes and production parts in high-requirement applications, the company reports.

Stratasys additionally is offering this material on a specialized Fortus 380 and now has a family of 3D printers in a range of price points that can build with Carbon Fiber Nylon 12. Stratasys expects the Fortus 380 CF to ship in the second or third quarter of this year.

In related news, the company highlights its enhanced Stratasys J750 3D Printer alongside the new Stratasys J735 3D Printer, which enables designers and engineers to build realistic prototypes with streamlined design-to-prototype workflows. Offering in excess of 500,000 color combinations via a new vivid color package, color matching and advanced clear with texture functionality, the PolyJet-driven systems create prototypes that are intended to look, feel and operate like finished products, the company reports. Eliminating costly requirements for painting, assembly, or post-processing, both systems shrink prototype cycles by producing parts that are consistent.

The newly advanced J750 and J735 PolyJet 3D Printers simulate parts with full color and textures, ranging from rigid to flexible, transparent to opaque. Additionally, two new materials, VeroYellowV and VeroMagentaV, deliver enhanced red/orange/yellow colors with next stage translucency. These advanced colors are available both on the J750 and J735 3D Printers - and now the Connex3 3D Printer.

In more news from Stratasys, the company is seeking beta customers for its new software designed to improve the Stratasys Additive Manufacturing solution for the production of jigs, fixtures and other manufacturing tooling.

The new software will help industry streamline operations and improve efficiency for jig and fixture creation. Offered through GrabCAD Print, the software embeds application expertise, automates several complicated and time-consuming processing steps, and eliminates the need for multiple programs within the workflow.

Jigs and Fixtures for GrabCAD Print expands upon the capabilities offered in Stratasys Insight to streamline the toolpath planning process; increasing ease of use, reducing time and costs to create jig and fixture parts, and maximizing the value for Stratasys’ Additive Manufacturing solutions.

By accepting native CAD designs, the part’s original design intent is maintained. This eliminates the need for users to convert their CAD design to an STL file, which can result in key information being lost during translation. With Jigs and Fixtures for GrabCAD Print, Stratasys offers tooling designers and manufacturing engineers a streamlined design-to-part workflow and a user-friendly path between tooling CAD design and additive manufacturing.

The Jigs and Fixtures for GrabCAD Print software is targeted to manufacturing engineers, tooling designers, and production managers, as well as service bureau programmers, executives, and owners.

Those using Stratasys 3D Printers for jig and fixture or manufacturing aids production and would like to participate in the beta software program may contact Stratasys here.