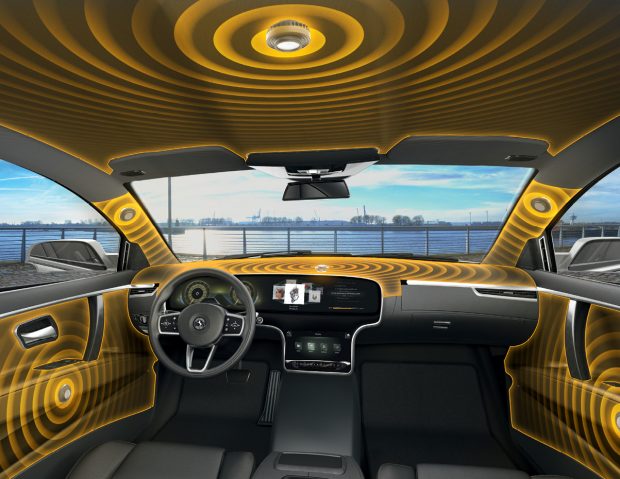 Speaker systems in cars—from low-end standard equipment to expensive custom set-ups—all use basically the same type of voice coil/diaphragm design. They also take up a significant amount of space in the vehicle.

German automotive supplier Continental believes it has found a way to provide quality sound while reducing the amount of space and weight that sound systems consume in vehicles. The company has developed a “speakerless” system that uses a series of transducers (or actuators) installed within interior vehicle panels. Rather than vibrating a speaker diaphragm, these transducers vibrate the interior surfaces of the vehicle.

After analyzing panels for acoustic properties, Continental engineers incorporated them all into a test car to analyze them as a system. Image courtesy of Continental.

The original idea for the speakerless system grew out of the company’s own research into plastic acoustic materials and pressure on automakers to use more lightweight and stiffer materials, according to Robert Joest, acoustic engineer at Continental. “We started doing our first investigations into the idea back in 2015,” Joest says.

The various types of surfaces are tuned to cover the full spectrum of sound, according to the company. The system provides a surround-sound effect that has already received decent reviews when it comes to audio quality, based on demonstrations at auto shows.

The resulting sound system is significantly lighter than a traditional audio system and can provide new opportunities for designers to alter interior vehicle designs because they no longer have to accommodate speaker vents. Ac2ated Sound also requires less electricity.

It can be integrated into any type of vehicle interior, and uses standard transducers throughout the vehicle to reduce the amount of customization necessary to fit different makes and models of cars.

The sound system operates on the same acoustic principles as a stringed instrument.

In a conventional loudspeaker, there is a magnet and a voice coil. When you apply voltage to the coil, it moves up and down. That movement is then transferred to a membrane or diaphragm, which vibrates and produces sounds.

With the Ac2ated system, the voice coil is attached to the structure and the magnet moves. When voltage is applied, the magnet moves up and down to produce vibrations that are transferred to the structure. “The whole surface radiates sound,” says Jens Friedrich, acoustic engineer. “Sound can come from everywhere, from any surface with different materials and different covers.”

The magnet moves (instead of the coil) in order to induce enough force into the material surface.

Continental (which makes tires, interior electronics and other automotive systems) has leveraged its years of experience working with different interior materials to help determine which surfaces can be used as speakers. “We know the behavior of these different surfaces, so we can combine them into a sound system,” Friedrich says.

Each surface has a unique acoustic behavior. A-pillars (the vertical supports that hold the windshield in place) are good for mid and high frequencies. Large surfaces like the ceiling panel are able to produce lower frequencies. “With all of these surfaces combined, we can cover the whole frequency range a human can listen to,” Friedrich says.

Continental has deep experience in vehicle NVH testing and had to draw on these resources to determine how the different panels would perform individually and in concert.

“We had a good idea of what was possible, but no one was sure if we could cover the whole frequency range,” Joest says. “That was the first question we had to answer. The other question was if there was any influence or interaction between the system and the vibration coming up through the vehicle when it traveled over rough surfaces or roads.”

As for the latter issue, extensive NVH testing of demonstration vehicles showed that the movement or vibration of the vehicle had little or no effect on the sound system’s performance.

Continental uses proprietary acoustical analysis software to analyze its acoustic measurements, and operates its own acoustic testing environment. Each type of vehicle panel was tested individually (outside of the vehicle).

For example, the company tested different types of A-pillar covers from different vehicles. “We put actuators on it and measured the vibration inside the material surface, and then tried to find the best fixing point for that acoustically,” Friedrich says. “We measured that and then built the cover back into the car and did acoustical measurements via microphones to record surface vibrations in the vehicle environment.”

Using that approach, Continental was able to analyze existing panels and determine the acoustic characteristic of each surface and material, how much vibration could be expected and where the best place was to attach the transducer to get the optimal sound reproduction.

The company did parallel testing of various surfaces in demonstration cars.

When looking at different types of vehicles using different interior panel materials, recent lightweighting efforts also helped play in Continental’s favor. “In general, we found that with the lightweight design trend in the last 10 years, most of the interior panels can be used for sound reproduction because everyone is trying to optimize weight,” Joest says. “That leads to similar structural behavior in interior panels. There were slight differences in the details, but in general, most components can be used for this system.”

After testing each individual panel for its acoustic properties, Continental then had to incorporate all of the panels together to analyze how the entire system would work together in a demonstration car. “There was tuning done for the overall system,” Friedrich says. “We optimized the combination of different panels to get the best outcome.”

Although the company’s acoustic analytics systems were used to help determine that final design, human hearing also played a big role. “We have engineers who sit in the car and do a subjective evaluation,” Joest says. “We do some frequency measurements, but there is also a more subjective process of tuning the car. We also optimized for the delays you get if there are different distances from the panels to the ears of the listener.”

It’s a similar process to that used for traditional speaker systems. “You tune the system via software and digital signal processing,” Friedrich adds.

Continental also wanted to keep the transducer design standard so the equipment wouldn’t have to be altered significantly for different panels or vehicles. They also minimized alterations to the panels themselves.

“We basically just need a flat surface inside the panel for connecting the actuator or transducer,” Joest says. “The attachment method doesn’t make a difference. We’re not designing new interior panels or changing the mounting process.”

Because the transducers are also so much lighter and smaller than regular speakers, they could even be fixed to the panels prior to being delivered to the OEM for installation.

One remaining challenge is that the vehicles the transducers are being tested on still have speaker grills. “That’s not optimal because it reduces the surface area of the panel,” Joest says. “The larger the surface we can excite, the more efficient the system is.”

Human contact with the panel surface can affect the vibration and acoustics. “But that depends on the frequency,” Joest says. “If you touch the panel lightly, then only high frequencies are affected. We use the A-pillar for those frequencies, and drivers usually don’t place their hands there. It really depends on the surface material as well. Whether you are using fabric or leather can create small differences in the sound, but that can be overcome in the tuning process.”

The company is also developing solutions for smaller vehicles like sports cars that don’t have particularly large panels. “It can be difficult to generate low frequencies in those interiors, but we are working on that,” Joest says. The company is prototyping that solution now but isn’t ready to demonstrate it yet.

The transducers are smaller than conventional loudspeakers. A subwoofer box, for example, can take up to 12 to 20 meters of box volume that has to be placed in the interior of the car. With Ac2ated, that isn’t necessary. “We can reduce the amount of modules because (we) have these large surfaces that produce sound and can fill the room with sound,” Friedrich says. “With conventional speakers, the membrane is very small with a diameter of 10 cm or so. Because we have large surfaces, we reduce the amount of channels in the amplifier to build up the sound system.”

The system also has no visible components because the transducers are behind the panels. “That provides additional freedom for interior designers, because if they want to do some branding or something else on the sound system, they can do it in a variety of different locations in the car,” Joest says. “There are no speaker grills anymore.”

The most important benefit for OEMs, though, is the weight savings. According to Friedrich, the Ac2ated system can reduce the weight of the speaker system by up to 90%.

Joest says that a number of OEMs have already approached Continental about adopting the system in vehicles, but he was not able to elaborate at press time.

“We’ve had feedback that our approach is new and very interesting for them [automakers], because they are dealing with weight reduction, particularly as they look for ways to package batteries for hybrid and electric vehicles, which are very heavy,” Joest says.