BioMimics is launching with options that mimic the complexities of heart and bone structures, with a third application—vascular anatomy—scheduled for an early 2018 release. 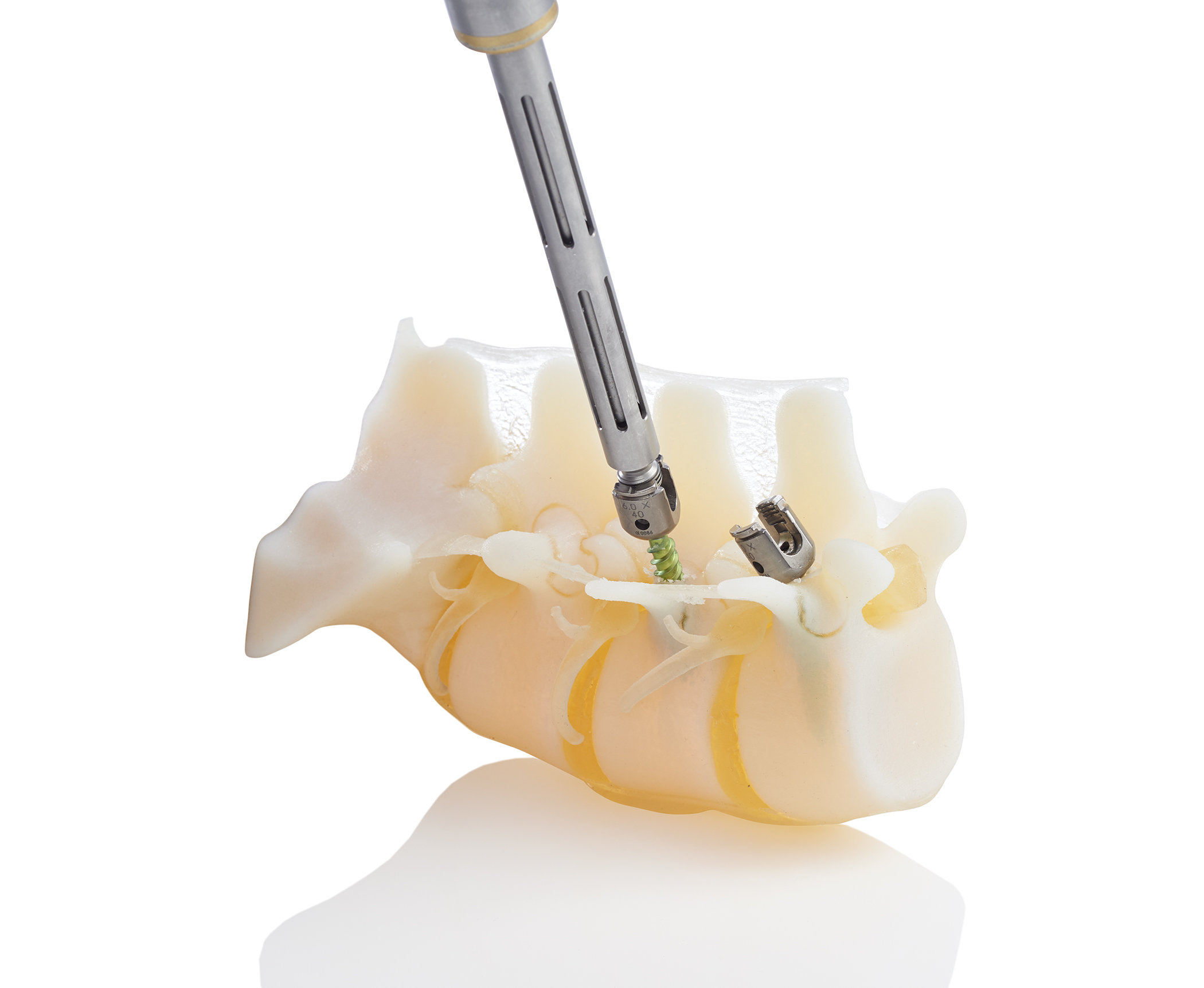 Stratasys BioMimics 3D-printed model of a spine section, made from multiple appropriate materials on a J750 AM system. The model’s material properties allow it to be used for training surgeons; here, a pedicle screw is being inserted. (Image courtesy Stratasys)

As much as books and websites teach everything from how to unbox a computer to how to assemble an IKEA desk, they still don’t present the full insight-potential of a physical part. There’s nothing like holding, turning and viewing a real-world sample to give someone a deeper understanding into an intricate part or device. And if that part happens to be a human organ or anatomical structure, the importance of a lifelike model goes up dramatically.

Stratasys BioMimics 3D-printed model of a spine section, made from multiple appropriate materials on a J750 AM system. The model’s material properties allow it to be used for training surgeons; here, a pedicle screw is being inserted. Image courtesy Stratasys.

Until a few decades ago, medical modeling—a centuries-old skill—relied on carving or molding materials like wood, ceramic and plastic. Such physical models, replicating both interior and exterior human anatomy, are extremely useful for training and educating medical professionals, or serving as test platforms for device manufacturers. However, they often lack unique details and material authenticity.

The evolution of additive manufacturing (AM/3D printing) is changing all that. While patient-specific AM models already help doctors visualize and plan the steps of difficult surgeries, another aspect of this field is emerging: that of medical models with realistic material properties, serving as tools for researchers, educators and medical-device manufacturers. Stratasys, one of the pioneers in 3D printing, has just announced a new medical-modeling service to meet this demand.

Stratasys has developed what it calls BioMimics, a modeling solution offered initially in North America through Stratasys Direct Manufacturing, the company’s manufacturing division, and available immediately. BioMimics is launching with options that mimic the complexities of heart and bone structures, with a third application—vascular anatomy—scheduled for an early 2018 release.

Combining Stratasys PolyJet 3D printing with new materials and processing parameters, these functionally accurate replicas eliminate a number of today’s limitations in medical training, research and testing. “3D printing is already being widely used to recreate anatomy for patient imaging, but what’s been needed has been the biomechanics element,” says Michael Gaisford, Stratasys director of marketing for healthcare solutions.

The BioMimics approach produces models with highly detailed complexities, from intricate microstructures to melded soft and hard textures within a single model. This realism allows users of medical models to break free from the approximations of human anatomy offered by animal anatomies (different from human) and the lack of “live-tissue feel” found in highly processed cadavers. Moreover, a BioMimics model can include the details of a real-world, imperfect or diseased pathological system.

Creating these models starts with a dialog, says Gaisford; it’s not yet an automated process, but there is value in tapping the expertise of the material specialists at Stratasys Direct Manufacturing. Users either provide an STL model of the structure in question or data from a CT scan or MRI, and a Stratasys designer will use that as guidance for defining the optimum, specialized BioMimics “building blocks” (set of AM parameters). This entails directing the PolyJet printer to print with a digitally blended material with specific characteristics, at every voxel location in the build file, generating model-specific color, texture and density.

Bones and Hearts, for Starters

Gaisford gives examples of how accurate and useful such models will be: “If you’re doing a spine model that you want to be able to drill pedicle screws into, and have haptic feedback of the trabeculae (tissue) within the vertebra, then we would overlay that particular BioMimics building block. Or, if you want soft discs on the model that the physician can remove in a practice discectomy, and have the nucleus come away like crabmeat, then we would apply those characteristics within the BioMimics bone building block.”

Using a multi-material 3D-printed model for training a surgeon to perform a spinal discectomy: step one, an incision between sections of “bone” and “disc” material. The model was produced through the new Stratasys Direct Manufacturing BioMimics service. Image courtesy Stratasys.

Step two in the surgical training for a discectomy: removing “nucleus material” from the 3D-printed part. The texture and density accurately mimic those of an actual disc. Image courtesy Stratasys.

Even more customization is readily available, Gaisford notes, so that the printed model meets a specific clinical scenario. “If the customer says, it’s a spine model,” he explains, “but they want it to be for an osteoporotic woman in her 70s, then we would take that BioMimics building block and adjust the bone density accordingly. When you place screws into it, or are probing it, it will respond as an osteoporotic patient would.”

This latter scenario would, for example, help the manufacturer of titanium pedicle screws test a new design targeted to that exact application, rather than to generic, dense “healthy” bone.

Advances in Hardware, Software and Materials

Although the BioMimics program has been underway for some time, the Stratasys team really escalated its efforts over this past year. Gaisford says that not only were new materials needed, but that developing the software to control voxel-level printing was critical. And, of course, it all depends on the capability of the Stratasys J750 AM system to combine six materials on the fly.

Components for additional building blocks are in the works, starting with the vascular anatomy version. Users have already noted how this will improve pre-clinical validation of new devices and support clinically realistic training simulators. Watch the video “Lifelike Vascular Environment” below to see work that has led up to the new program.