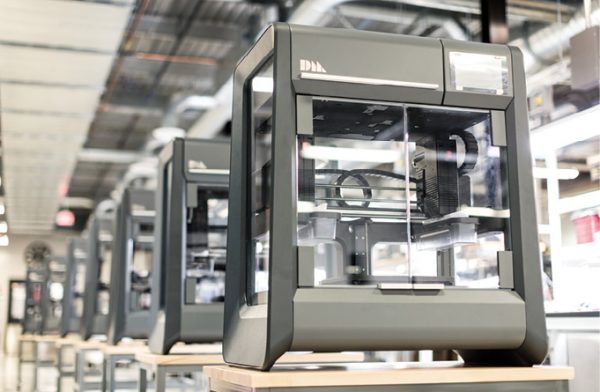 Get the Most from Advanced Materials
The need for composite and customized materials grows within the product engineering realm, but multiscale...
Essentium Research Reveals Manufacturers Want Open Additive Ecosystems
This is the second in a series of findings from independent global research on the...
SLS Inventor Carl Deckard Dies
Additive manufacturing pioneer held numerous patents, created AM materials.
Protolabs’ 3D Printing Service Lands Wayzn CES Innovation Award Honors
Wayzn Slide allows dog owners to let their pets out, even while away.
More Prototype/Manufacture

Decades ago, the only companies privy to computational horsepower had the deep pockets and technical expertise to run mammoth mainframes, until the PC revolution and subsequent rise of the internet democratized scalable computing. It’s a similar trajectory with metal 3D printing—what was once the province of a select few engineers and manufacturers is slowly giving rise to more mainstream deployment thanks to innovative technologies designed to address long-standing limitations surrounding cost and performance.

For decades, powder-based sintering processes have dominated the metal additive manufacturing landscape, most significantly direct metal laser sintering (DMLS), which spreads layers of metal powder across a surface using a laser to sinter the material in a series of very thin layers. Although DMLS gained traction in the aerospace and medical sectors, the slow speeds and high costs limit usage to specific, very high-end applications, including lightweighting parts and creating highly customized medical implants.

In recent years, with early patents now expired, a host of startups are trying to reinvent metal 3D printing. They’re introducing technologies and using more mainstream materials to aim to bring down the costs, accelerate time to print, and most significantly, establish metal additive manufacturing technology as a viable alternative to traditional machining and casting methods for early prototyping and production applications.

“As the market grows, startups and others are seeking new ways to process metals by AM,” says Terry Wohlers, president of Wohlers Associates, a consultancy and research firm specializing in 3D printing. The Wohlers Report 2018 estimates that 1,768 metal AM systems were sold in 2017 compared to 983 systems in 2016. “Speed and cost are two of the biggest challenges faced by the makers of metal powder bed fusion systems.”

The combination of patents expiring and highly visible success stories like GE’s effort to lightweight and consolidate parts on its LEAP jet engine fuel nozzle have set the wheels in motion for further advances in metal 3D printing, according to Larry Lyons, vice president of Products at Desktop Metal, a prominent newcomer in the field. It’s also making the technology a viable alternative for companies with mid-range manufacturing needs, where cost targets are more stringent.

“The bar for displacing traditional manufacturing with additive is much higher in cost-sensitive industries,” Lyons explains. “Being able to adapt the technology to focus on speed and use more commonly used powders than traditional sintering processes … enables us to make the technology more affordable and accessible, getting into the hands of more engineers.”

Desktop Metal has two systems—the Studio designed as an office-friendly unit touted as up to 10 times less expensive than comparable laser-based systems for engineers doing realistic prototypes or limited runs of end-use parts, and the Production System, slated for delivery next year, which targets traditional manufacturing processes with claims of competitive speed and cost-per-part targets.

The Production System will use a single-pass jetting (SPJ) bidirectional process that combines all the necessary steps for printing into a single action. SPJ employs 32,000 jets and powder spreaders to spread powder and print in a single pass across the build area so there is no wasted motion. SPJ deposits the metal powder and jets droplets of a binding agent to form high-resolution layers, adding agents that help supports fall off easily after sintering, another critical step in reducing time to print. Desktop Metal claims the Production System can produce over 500 parts in the time it takes a laser-based printer to output about a dozen. The system also uses low-cost MIM powder, which greatly impacts cost.

“When you combine the speed increases with lower raw materials costs, you end up with parts that start to cost more like what it would be with traditional manufacturing processes like machining or casting,” Lyons says, adding that the printer’s sweet spot will be for complex geometric parts on the middle end of production needs.

addLEAP is a Swedish startup working on another disruptive metal extrusion print technology. Its patent-pending Layered Encased Additive Process (LEAP) combines injection molding technology and additive capabilities, creating a thin mold or “skin” in a polymer material and filling in the mold with metal compounds in parallel, layer by layer. Its other differentiator is CODE, or continuous debind, which performs the binding process continuously and simultaneously, eliminating the cumbersome step of removing binder materials from the printed object—a major headache in traditional metal 3D printing, says Mats Moosberg, president and founder of the company.

“Working out of a powder bed is a health hazard—you have to wear a body suit to be safe,” he says, explaining that with the addLEAP approach, engineers deal with powder in a water-based binder, which is safer than working with loose powder. In addition, traditional metal 3D printing technologies incur a lot of powder waste and there are challenges removing binder material from the object in a safe way. addLEAP was designed to eliminate that complexity and manual labor, while its fused deposition modeling-style skin molds ensure isotropic parts, he explains. addLEAP is still in the early stages of development with proof of concepts slated for next year and launch planned for sometime in 2020.

The cold spray deposition method relies on a rocket nozzle that accelerates air up to three times the speed of sound, eliminating the need for a heat source. Image courtesy of SPEE3D.

In addition to advances in metal extrusion/binding 3D printing technologies, there are some new alternatives on the horizon. Borrowing from cold spray technologies used in the military for years, some companies have refined the approach to achieve significantly faster speeds than traditional approaches by eliminating the need for heat source. Titomic, an Australian company, uses the Titomic Kinetic Fusion process, which sprays titanium powder particles at supersonic speeds, employing kinetic energy, not thermal energy, to fuse them into solids.

SPEE3D, another Australia-based company, is also hanging its hat on supersonic deposition technology to achieve the speed, cost and repeatability intended to rival casting processes. Unlike other metal additive manufacturing technologies aimed at creating highly detailed parts, SPEE3D aims to make cast aluminum and copper parts—think brackets, pulleys, even heat sinks used in electronics applications. The LightSPEE3D printer’s supersonic gas jets achieve speeds three times the speed of sound, and the kinetic energy of the metal particles helps them deform and stick to the substrate, according to the company. A six-axis KUKA robotic arm, which is incorporated in the printer, allows for greater range of motion and aids in faster build times, notes Byron Kennedy, SPEE3D’s co-founder and CEO.

“Our advantage is speed—in a traditional powder bed printer, you use a laser to melt the powder and you go from solid to liquid to solid, and that just takes time because there is physics involved,” he explains. “No doubt you can make stunning parts, but it’s slow.” At speeds from 100 times to 1,000 times faster than what’s possible today and with the ability to print medium-sized parts, the LightSPEE3D is positioned as an alternative to casting and molding processes, Kennedy says.

XJet, founded in 2005 in Rehovot, Israel, is pushing the boundaries of traditional metal additive manufacturing with another alternative technology. Its NanoParticle Jetting (NPJ) liquid dispersion methodology, which supports metals and ceramic materials, uses 24 print heads with 512 nozzles each to jet liquid suspensions of solid nanoparticles into ultra-thin layers, eliminating the use of traditional metal powders. In addition, the printer maintains a high temperature in the build volume, which evaporates the liquid, and a bonding agent is applied to form green parts that are then sintered. The stochastic nanoparticles ensure outstanding high-density part properties, making the technology a fit for producing highly detailed and custom parts, says Dror Danai, XJet’s chief business officer.

XJet’s ability to simultaneously jet a build and support materials means there is no need to plan for supports in the design stage, saving time and money; at the same time, the soluble supports are easily removed, Danai explains. “By using two different materials for the build and support structures, we can create anything that the design engineer can imagine,” he claims. “Moreover, the beauty is that this material is easily removed so it minimizes post-processing.”

All of these technologies have a place in the engineering workflow, depending upon the application and use case, notes Cullen Hilkene, CEO of 3Diligent, a digital manufacturing service provider. The new cold-spray 3D printing technologies lend themselves to quick production of replacement parts while nanoparticle technologies deliver advantages for highly detailed parts and geometries. Regardless of which technology, having multiple metal 3D printing choices is a boon for engineers looking for opportunities to stretch their design wings and find new ways to cost-effectively create complex parts.