The partnerships, announced during the 2019 RAPID+TCT Conference in Detroit, will support the adoption of 3D printing by industrial manufacturers.

The partnerships, announced during the 2019 RAPID+TCT Conference in Detroit, will support the adoption of 3D printing by industrial manufacturers. 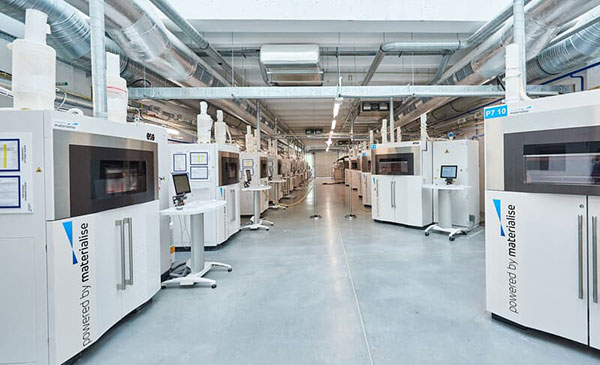 Materialise Streamics 8 will improve connectivity with the factory floor. Image courtesy of Materialise.

Materialise NV has partnered with HP, Nikon and Essentium to bring improved productivity and connectivity to additive manufacturing operations. Materialise also announced that it will release a new version of its 3D printing operations management software, Streamics 8 in June 2019, and the availability of Materialise Simulation 2.0 as an optional module with Materialise Magics 23.

Materialise has expanded its collaboration with HP, developing a new version of its build processor to support the full range of printers in the HP Multi Jet Fusion portfolio, including the Jet Fusion 5200 and Jet Fusion 500/300 Series of 3D printing solutions. This provides customers with a seamless connection between the Materialise Magics 3D Print Suite and HP Jet Fusion printing solutions, enabling advanced data preparation and operation management, according to the company. In addition, the Materialise HP Build Processor 2.0 allows users to retrieve operational data from the HP machines for better production monitoring. In combination with Materialise Streamics software, it allows users to store relevant build- data for improved traceability. The Materialise HP Build Processor 2.0 will be available in the second half of the year.

Customers who purchase an HP Jet Fusion 500/300 Series printer, will also gain access to the Materialise Magics Essentials software for a period of six months. This will allow customers to use the color and texture handling of Materialise’s data preparation software, in combination with the full-spectrum color capabilities of the HP Jet Fusion 500/300 series.

Materialise is also working with customers to develop solutions for HP’s new certified thermoplastic polyurethane (TPU), ULTRASINT developed by BASF, which is ideal for flexible and elastic parts.

HP has gained certification as part of Materialise’s program to test and validate 3D printing technology as being fully compatible with Materialise Mimics and Mimics inPrint software. This certification allows medical professionals to use the HP Jet Fusion 580/380 3D printers, in combination with Mimics software technology, to print full-color anatomical models for diagnostic use and surgical planning.

Materialise has received FDA clearance for software intended for 3D printing anatomical models for diagnostic and surgical planning uses, and introduced a program for manufacturers to have their printers tested and validated. With this certification, HP joins Formlabs, Stratasys and Ultimaker, bringing the total number of certified printer manufacturers to four.

Materialise Collaborates with Nikon and Essentium

Materialise collaborates with Nikon, a supplier of advanced opto-electronics and precision technologies, to improve insight into the 3D printing build process. These research activities, supported by Materialise software and the Materialise Control Platform, aim to provide users more control and increase productivity through analysis of the building process.

Materialise and Essentium, a provider of 3D printing solutions for industrial additive manufacturing, entered into a strategic partnership in November 2018 to jointly advance and scale industrial 3D printing. In a first step towards that goal, the companies have announced the integration of Materialise’s Magics Essentials software with the Essentium High Speed Extrusion (HSE) 3D Printing Platform.

The configurable web portal is intended to allow remote design departments to better interact with the production floor for optimized designs and minimized production costs. The web-based API is designed to enable easier integration of the 3D printing production environment with existing business and manufacturing IT systems.

Streamics 8 also offers several features to help increase productivity, including automatic nesting across multiple build platforms, for a more efficient build preparation. This allows users to drag and drop multiple parts into the build planner, which automatically nests the parts and creates the appropriate number of build operations.

With the introduction of Streamics 8, Materialise paves the way towards digital rights management (DRM) in 3D printing. DRM provides manufacturers a safe and secure way to print high-value end-parts and to scale operations over a global distributed manufacturing network. By enabling the protection of designs, Streamics 8 offers peace of mind to manufacturers who demand a more secure production environment. Materialise is working with partners to establish a true end-to-end, secure 3D printing manufacturing process, allowing users to restrict the printing of a file to a pre-defined printer and guarantee the exact build quality or to limit the number of reprints.

Scaling 3D printing production also requires full traceability of each individual component. Streamics 8 automatically stores all relevant build data, such as serial numbers, process parameters and part revisions, and makes this data available at all times. With Streamics 8, Materialise supports both text labels and Data Matrix Labels. Data Matrix Labels convert the alphanumerical data from standard 3D-printed labels into a data matrix code that can be automatically applied to individual parts. These smart tags are smaller and machine-readable, reducing human error and further automating the post-production process, according to the company.

Materialise has also introduced the second version of its simulation software, which the company says offers significant speed improvements and advanced simulation features. Materialise Simulation 2.0 allows operators to predict and analyze the behavior of a part during physical production by creating a virtual prototype. This helps to optimize the build preparation and reduces the number of costly reprints and fails.

The company says the new version offers speed improvements of up to nine times for file management and is capable of handling larger files. New simulation features include part compensation, which allows users to predict and compensate heat-related part deformation. The new version also makes it possible to simulate heat diffusion, which prevents overheating during the print process. Materialise Simulation 2.0 is available as an optional module with Materialise Magics 23.