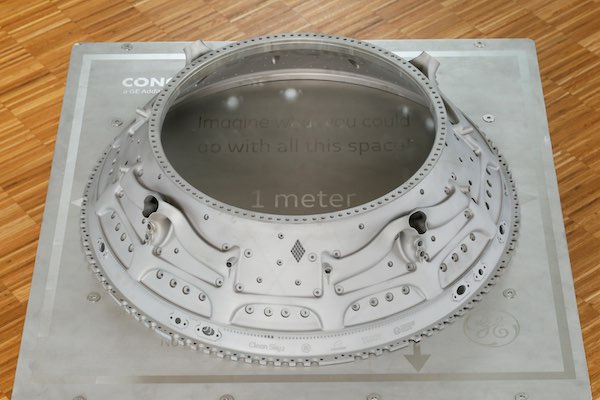 Equivalent to one meter in diameter, the TCF casing is one of the largest metal 3D printed aerospace parts. Image Courtesy of GE Aerospace

What’s the Value of a Pixel?
How BMF achieves ultra-high resolution, accuracy, and precision.

After six intensive years in R&D and engineering, a European consortium has delivered the Advanced Additive Integrated Turbine Centre Frame (TCF) casing, what it claims is one of the largest additively manufactured metal parts produced for aerospace applications and a marker for what’s possible to help drive lower emissions aviation.

Led by GE Aerospace Advanced Technology (GE AAT), the partnership for the Turbine Technology Project (TURN) was set up to accelerate technology maturation for future aerospace engines. The consortium’s crowning achievement is the TCF casing, dubbed the MONACO project, a single-piece design aimed at narrow-body engines in which the part is approximately one meter or more in diameter. The project’s key design objectives were to reduce the weight of the part by 25%, shrink part count to improve maintenance, and bolster the pressure losses of the secondary air flow.

The large-format TCF casing was eventually produced using GE Additive’s Direct Metal Laser Melting (DMLM) technology in nickel alloy 718. The shift from conventional casting to AM helped reduce the cost and weight of the TCF casing by 30%, GE officials said, while also consolidating 150 parts into one. Another benefit of the metal AM approach: Lead time to build the TCF casing was vastly reduced, going from an average of more than nine months to two and a half months.

Beyond establishing metal AM as a viable method for producing a part of this size and nature, the TCF project is also notable as it showcases how the aerospace supply chain can reduce its reliance on castings and conventional manufacturing for future applications. TCL, which serves as a duct for the hot gas that flows from the high-pressure turbine into the low-pressure turbine, is conventionally manufactured by casting or forging methods, followed up with additional machining steps. Given the stringent requirements governing in-flight hardware in the highly regulated aerospace industry, there is only a small number of approved vendors for casting and forging work, creating long lead times and higher costs. That’s what made it a great candidate for the metal AM, GE officials said.

The GE AAT consortium spearheading the TCF project was started in 2018 with partners Hamburg University of Technology (TUHH), TU Dresden (TUD), and Autodesk. The project, which was initiated in response to Clean Sky 2 proposals, covered the design and production of coupons and critical parts, validation, and qualification. The Clean Sky 2 Programme, to be succeeded by Clean Aviation launched in December 2021, is an European aerospace industry-funded initiative charged with reducing CO2 emissions by up to 30% compared to 2014 aircraft standards as well as to develop a globally competitive aeronautical industry and supply chain in Europe.

Project participants touted the industry-academic collaboration, crediting TUHH for delivering access to the GE Additive M2 machine along with prototyping expertise; TUD for its efforts to advance validation and build a dedicated test rig; and Autodesk for optimizing the design for AM process. Autodesk experts also took center stage in optimizing the structural and fluid performance of the TCL while leveraging the company’s design tools to consolidate over 150 parts into a single component. GE Additive supported the effort by printing the end-use part with its A.T.L.A.S. machine.