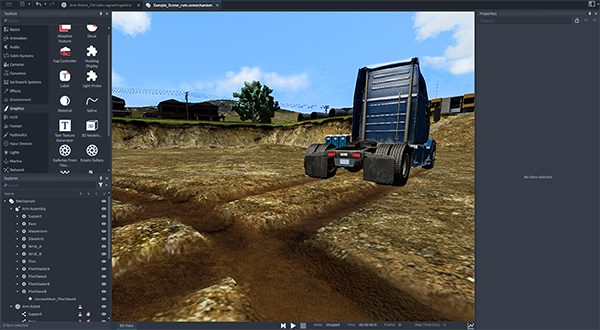 “Over the past two decades, our team has developed some of the most advanced capabilities in engineering-based simulation,” says Lisa Barbieri, vice president, Marketing and Customer Experience. “Vortex Studio 2019b expands a powerful toolset, making it easier than ever before to generate & deploy simulations that look and feel closer to reality.”

Expanding upon a history of real-time simulation of soil, CM Labs announced a new, expanded Deformable Terrain zone with features that go beyond digging and pushing soil. While still allowing the deformation of a given surface using digging tools (bucket or blade), vehicles' wheels can now directly impact the terrain, compressing and deforming it on each pass, creating ruts and graphical marks modeled on specific textures.

“Ruts are a challenging, dynamic part of any off-highway scenario, whether that’s driving in a military convoy or hauling logs in a forestry setting,” remarks Daniel Holz, team lead, Vortex Engine (Physics & Graphics). “Adding compression caused by tires and tracks wasn’t a simple feat, but our highly skilled team worked diligently to add this additional layer of realism to our simulations.”

With a majority of the simulations built in Vortex Studio being related to vehicles, making these mechanisms easier to customize has been a key focus for CM Labs. In Vortex Studio 2019b, users can now start wheeled vehicle designs from a number of prebuilt vehicle templates.

“We expose important components in the vehicle interfaces of these templates,” says Martin Hirschkorn, technical product manager, Vortex Studio. “Without building new models from scratch, users can adjust and tweak the templates to match the performance of their vehicle.”

With components now customizable to the sub-assembly level, engineers will be able to take advantage of a greater degree of precision in their designs. Allowing for more flexibility in terms of building mechanisms and splitting of tasks between teams of simulation engineers, this feature is especially powerful for complex machines (vehicles, cranes, excavators) with intricate sub-systems and interchangeable components.

Deployment of Simulation Software and Hardware

Beyond upgrades to the core Vortex Studio platform, the user experience of adding and deploying simulation has been enhanced with a both new setup utility and an optimized licensing manager, providing simpler workflows for the installation, activation, upgrade and management of Vortex Studio software.

Other features include parallax occlusion mapping; self shadowing (materials with a height map can render a dynamic shadow); remote debugger too (a new application that allows the dynamic monitoring and tuning of mechanisms in a Vortex simulation running anywhere on a network); more logic extensions (assemblies can contain scripts, connections and VHL interfaces); and Quadro support.