Metal additive manufacturing technology is accelerating industrial development in the automotive sector, as shown by the Bugatti sports car brand in realizing function integration and performance optimization of components. Multiple metal 3D printed functional components from Bugatti have been previously featured in the press, and all were produced on machines developed and manufactured by SLM Solutions.

Sparks fly during the dynamic bench testing of a Bugatti brake caliper, the volumetrically largest functional titanium component built with selective laser melting to be tested.

“Proof that additively produced metal components can cope with extreme strength, stiffness and temperature requirements at speeds of over 375 km/h with a braking force of 1.35g and brake disc temperatures up to 1,100°C”, says Frank Götzke, head of New Technologies at Bugatti. The caliper test showed that a tensile strength of 1,250 N/mm2 and a material density over 99.7% was achieved. 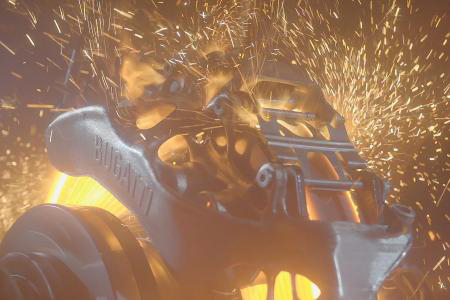 Bugatti uses selective laser melting not only for lightweighting, but also within the functional scope of its vehicles. “We always strive for absolute perfection, stylistic as well as technical, as well as considering the perfect synergy of both elements—the tradition of Ettore Bugatti we uphold,” Götzke says. The active spoiler bracket, manufactured on an SLM 500 with Fraunhofer IAPT (formerly Laser Zentrum Nord), represents this combination, aiding the 1,500hp vehicle to reach speeds of 400 km/h in 32.6 seconds and bringing it back to a stop in 9 seconds. The active rear spoiler can be adjusted in height and angle, supporting the aerodynamics required.

Bugatti teamed with Siemens to optimize the bracket for production and reduce the number of iterations needed to optimize for weight and rigidity. Using 3D printed titanium with a tensile strength of 1,250 MPa and a material density of over 99.7 percent, the spoiler bracket was reduced by 5.4kg, a weight reduction of 53%, yet increased rigidity.

With fewer sparks, a small bracket with integrated water cooling acts as an active heat shield for a reduction in transferred heat. The motor bracket has been installed in all series vehicles since the delivery of the first Bugatti Chiron from the supercar manufacturer’s production facility in Molsheim, France.

The Chiron, like its predecessor, the Veyron, has two separate water-cooling circuits to keep the component and system temperatures at an acceptable level. The high-temperature circuit is used to cool the 1,500hp W16 engine of the supercar, while the low-temperature circuit ensures that the intake charge cooling temperature remains low.

A bypass flow filter of the NT circuit supplies the console while isolating the electronic components from the temperatures of the transmission oil tank. The bracket engages the gears while opening and closing the two clutches of the 7-speed dual-clutch transmission while including the control unit. As a result, the temperature at the electric motor and at the control unit of the pump when driving through a handling course can be lowered from 130°C to 90°C, a reduction of 40°C.

The bracket, manufactured in the alloy AlSi10Mg on an SLM 280 Twin, was commissioned by SLM Solutions at Rolf Lenk Werkzeugbau GmbH.

The start of the cooperation between the Volkswagen subsidiary Bugatti and the SLM Solutions Group AG dates back to the design, calculation and later production of a bionically optimized front axle differential housing at the turn of the year 2014/2015.