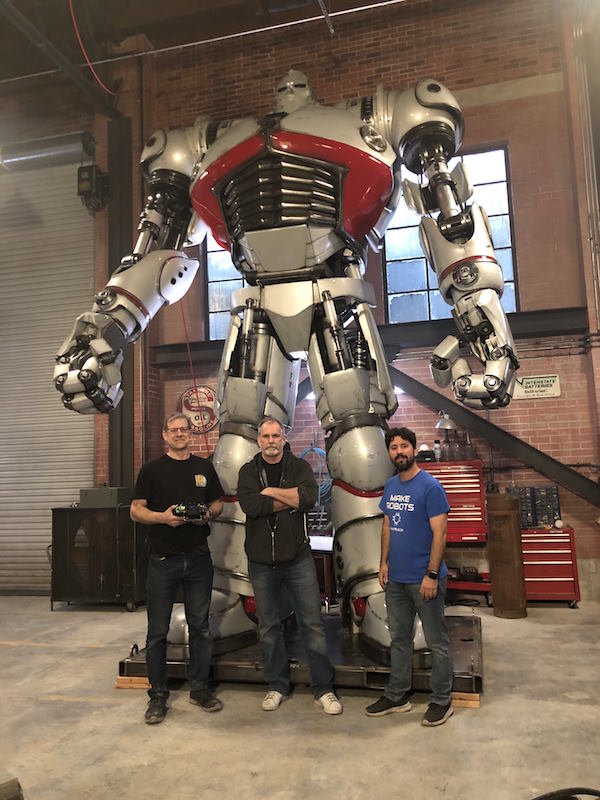 Members of the team at Legacy Effects (Ken Cornett, Alan Scott, Diego Porqueras) pose in front of the giant S.T.R.I.P.E. prop on the set of “Stargirl.” Image courtesy of Legacy Effects.

When engineers tackle big projects—designing a new car, a robot or a drone—the process often takes years to go from concept to the final product. Imagine the pressure on a designer who has been asked to come up with something big—say, a robotic supersuit that will be used to keep the forces of evil from conquering the world—and has been given only a few weeks in which to do so.

That’s the kind of pressure that special effects designers in Hollywood face on almost every job. Last year, San Fernando, CA-based Legacy Effects faced just such a challenge for the producers of the new “Stargirl” series (which airs on the DC Universe streaming service and the CW network). In just eight weeks, the Legacy team had to design and construct a key supporting character: a 15-ft.-tall, 5,000-lb. robotic suit of armor called S.T.R.I.P.E. (Special Tactics Robotic Integrated Power Enhancer).

In the comic and the TV show, S.T.R.I.P.E. is built and operated by Pat Dugan, a gifted mechanic and superhero sidekick (played by Luke Wilson in the series). As in most superhero movies, the action sequences featuring the armor are digitally rendered by Zoic Studios, but the producers of the series also commissioned a life-size physical prop. That’s because the actors have to frequently climb on and into the armor, which would have greatly increased the cost of the digital animation. 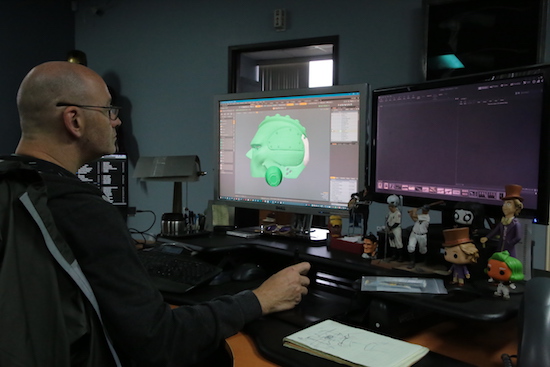 Legacy Effects uses a variety of digital design technologies to create props and effects like the S.T.R.I.P.E. armor. Images courtesy of Legacy Effects.

“They could have done this completely in CGI [computer generated imagery], but when they started looking at how the actors are going to interact with it, it made sense to have a physical prop,” says Legacy co-founder Alan Scott. “It’s less costly to build it than to try to blend that animation in. It was an asset that could be amortized over the life of the production.”

Legacy teamed up with another shop, Allfx, to create the physical prop based on the digital design used by Zoic for the computer-generated sequences. While the digital team can “cheat” certain movements in the animation, the real-world prop (which is fully poseable) has to obey the laws of physics.

“Our team had to make it functional,” Scott says. “Things always have to be adjusted when they have to move in the real world. We made changes so it would be functional, and then we pass those changes back to the digital team.”

Legacy has deep experience on comic book-based projects, and has built props of similar scale. Those include large pieces for “Avatar,” “Jurassic World,” “Iron Man,” and an 18-ft.-tall Sentinel robot for one of the “X-Men” films.

To do so, Legacy relies on a host of digital design and fabrication technologies. First, Legacy had to create a buildable design using the digital images of the armor.

“The original files we got were game resolution files. They are open shells,” says Jim Charmatz, conceptual designer at Legacy. “We had to take all that stuff and figure out how it could be built, what thicknesses go where, how can we break this apart. We had to add geometry back in that wasn’t there so we could create doors that open and close in the chest. The whole thing had to be rebuilt.” 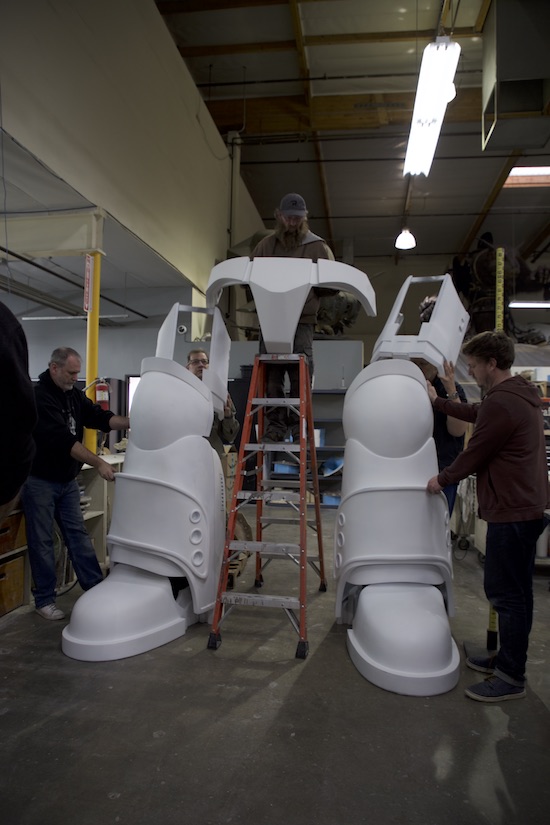 Legacy uses a number of software tools, including ZBrush digital sculpting software, SURFCAM for CNC mills and lathes, Modo 3D modeling software and Autodesk Maya model and animation software. Once the digital models of the armor were created, Legacy turned to Eric Allard of Allfx to design the mechanical infrastructure needed to support the figure and enable movement.

Allard is a veteran effects artist, and his list of credits includes work on everything from “Stuart Little” to “Alien Resurrection.” He built the Johnny 5 robot for the film “Short Circuit” (1986), and designed the Energizer Bunny.

“Jim [Charmatz] takes the artist concept, which is a 3D model, and designs parts that can be made by the mold department. Then I get that model and import it to TurboCAD for the mechanical design,” Allard says. “I go inside the model and figure out where I can put in the structure. It was a learning curve, because I usually build robots from the mechanical side first. This was already well defined and everything had to fit within it.”

“The model had all these pistons and hoses running through it, and that didn’t really account for the steel we had to put inside,” says Legacy model builder Ken Cornett. “We have to make it look right and still work. We can’t really change the structure or the outer appearance, so we have to be resourceful.”

Charmatz and Allard passed the model back and forth to ensure that the exterior components would fit correctly with the infrastructure that Allard was designing. 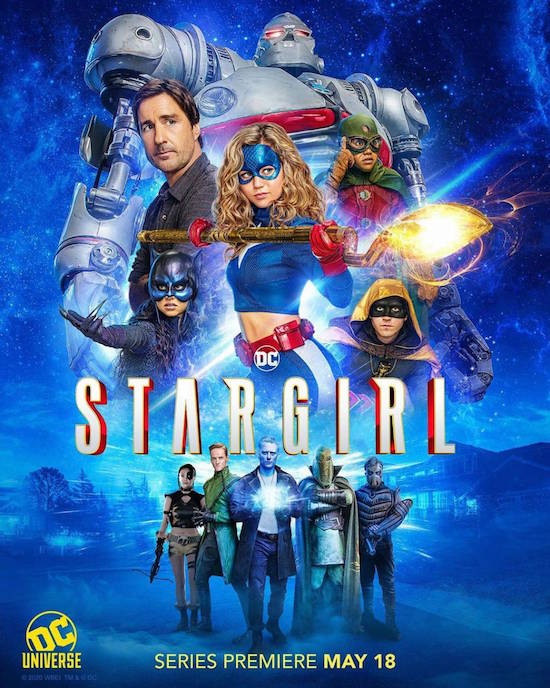 “Eric had to learn our workflow and a new program while designing the mechanical infrastructure,” Scott says. “We have to force that software handshake. We don’t do all of our design in a single program. It’s labor intensive. We design the artwork in an art program, and then convert that to a mechanical program, and then Eric has a true engineering program.”

Mix of New and Old Technologies for Fabrication

While the interior structure is made of steel, the exterior panels were cast in fiberglass from molds that are either 3D printed or milled from foam.

“With something this big, we mill the body panels out of foam,” Scott says. “They sand and polish them and make models from there.”

“We rely heavily on Stratasys Direct for a lot of larger 3D prints,” Scott says. “We don’t have SLA in house, but we are buying three new printers this week because we can’t rely on the same technology we did last year. The technology is advancing and costs are going down.”

Legacy has been an enthusiastic advocate of 3D printing in the effects industry (Legacy has presented at events for the Additive Manufacturing Users Group), and often works with traditional manufacturers to share ideas to improve productivity.

“3D printing allows us to speed up different parts of the process, and then we can put our artists on other tasks,” Scott says. “I don’t want to have an artist spending a lot of time getting set up to mill parts. We can have something 3D printed in metal in a few days, and now I can use the brainpower of the designer and machinist to work with it in different ways.”

For the S.T.R.I.P.E. armor, the Legacy team went from the 3D model to a finished prop in just eight weeks. “That speaks to the quality of everybody at Legacy,” Allard says. “We could count on the fact that things were going to be right and that they would fit. It all had to come together and we didn’t really have time to go back and change anything.”

“Ths is industrial design done in eight weeks,” Scott says. “If this were a car, it would have taken a year and half. We have to do the same thing much faster, and it has to work. We’re embracing the technology of 3D design all the way through to construction, and that includes artistic design, mechanical design, 3D printing, milling out the parts, all the CAD programs. It’s a very predictable process for the tolerances we need.”

Once Legacy had built the prop, the digital files were then shared back to the production team so that the CG version of the armor will match the physical prop. Legacy also designed the armor so that it would be poseable and could be upgraded to include motors and animation if necessary.

“We weren’t sure how much it would need to move, so we tried to treat it like a stop-motion puppet,” Charmatz says. “With a few tools and ladders and fork lift, you can loosen some bolts, lift the arm, bend it. The fingers were 3D printed. Eric put metal inserts into them and tensioned them to hold a pose. You can open the palm or make a fist. It had to be poseable and come apart. It’s like a giant action figure with all the joint work built in.”

Those of you who don’t watch ”Stargirl” (which was just picked up for a second season) or read comic books may be wondering exactly what the S.T.R.I.P.E. armor is, and what it does. Here’s a quick history lesson:

While the Stargirl series is targeted at younger viewers, both the show and the comic characters dive deep into the lore of DC Comics. The character of Courtney Whitmore/Stargirl was first introduced in 1999 by writer Geoff Johns, and was based on his late sister, Courtney Johns, who died in the TWA Flight 800 explosion in 1996. The other characters in the show have a much longer history. 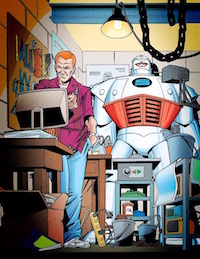 S.T.R.I.P.E. (Special Tactics Robotic Integrated Power Enhancer) is the robot armor worn by Stargirl’s stepfather/sidekick Pat Dugan. While the armor first premiered along with Stargirl, the Dugan character has roots stretching back to World War II. He made his first appearance as Stripesy, mechanic and sidekick for The Star-Spangled Kid, in 1941. Thanks to some time travel shenanigans, the duo were reintroduced in the comics in the 1970s. The Star-Spangled Kid character went through a name change and was eventually killed off in the 1980s.

In the “Stargirl” stories, Dugan builds the S.T.R.I.P.E. armor and resumes his sidekick duties when his stepdaughter begins fighting crime using the costume and gear of The Star-Spangled Kid and another Golden Age superhero, Starman. Stargirl and S.T.R.I.P.E. have since regularly appeared as part of the Justice Society of America.

There are actually two versions of the armor, the full-sized suit and a torso-only model that can be mounted on a hydraulic gimbal platform. The standing S.T.R.I.P.E. has stationary legs that are mounted on a heavy trench plate for stability. “If someone climbs on it, it won’t fall over,” Allard says.

The team only had time to assemble the full armor once before shipping it to Georgia, where the show is filmed. “The truck was here, and I had to insist that we put it together once because we had a team here, and we could make adjustments if it didn't fit together,” Scott says.

S.T.R.I.P.E. was transported by truck to Georgia—except for the hands, which the Legacy team carried with them on their flight. The Legacy crew put the armor together on the soundstage, and provided instructions for the production crew so that they could operate the prop and move it when necessary. “They are going to have actors climbing in and out of it, so it has to work and really be bulletproof,” Cornett says.

While effects designers are under much tighter deadlines, Scott says they also have greater flexibility than engineers in other fields.

“When the aerospace industry fell through here 15 years ago, we were approached by a lot of aerospace engineers looking for work, but they couldn't make it work in the film industry. We don’t have time for a lot of stress analysis and redundancy,” Scott says. “It has to be designed well enough so it won’t fail. We can’t go through rigorous testing. We have a great mix of people that have the right skill set, and can make decisions very quickly. It's amazing. A 15-foot tall robot grows out of thin air in eight weeks. We do the impossible with almost every job.”