Behind the Scenes at Materialise in the Midwest

Factory tour at Michigan-based 3D printing production facility provides a peek at the company’s innovations in the medical sector.

Factory tour at Michigan-based 3D printing production facility provides a peek at the company’s innovations in the medical sector. 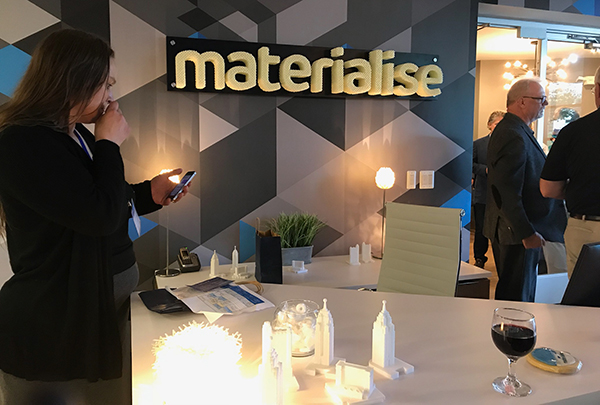 Materialise hosted a pre-RAPID+TCT 2019 reception and tour of its production facility in Plymouth, MI, a 30-minute drive from Detroit. Guests were able to complete a 3D-printed puzzle of four iconic landmarks (shown) in the Motor City.

Materialise, a software developer and 3D printing company largely known for its advances in the medical and automotive fields, hosted a meet-and-greet and factory tour at its facility in Plymouth, MI, on May 19, the night before RAPID+TCT event would start 30 minutes away in downtown Detroit.

Several dozen customers and partners of Materialise, including Siemens, BASF and Stratasys, along with the press, visited to get an insider’s look at what’s happening at the company’s Midwest location, in operation since 2009. Materialise, headquartered in Leuven, Belgium, also operates facilities in 17 other countries, and has another U.S. operation in nearby Ann Arbor.

Materialise’s products include software, medical applications of 3D printing, and stereolithography (SLA) and selective laser sintering (SLS) 3D printers for manufacturing. The industries it servers span everything from aerospace, architecture, art and automotive to consumer goods, eyewear, healthcare, machinery and service bureaus/contract manufacturers. In Plymouth, the focus is on medical production and sales/marketing for Materialise software for additive manufacturing and medical applications.

On this night, the focus was “3D in the D,” accentuated by the “Built in Detroit” theme underpinning the evening’s highlights. Upon entering the 45,000-sq.-ft. building, we were greeted by Materialise leadership and staff, and received a 3D-printed puzzle base to save for the tour, during which we'd collect puzzle pieces of iconic landmarks of the Motor City.

Kicking off the Event

Bryan Crutchfield, vice president and general manager of Materialise North America, opened the evening with a Materialise highlights video, followed by some Detroit city history that setup up Materialise Founder and CEO Fried Vancraen’s insights on the current state of 3D printing and Materialise’s role in the future of additive manufacturing.

“Build an organization built to last,” Vancraen said. “This company is built on the core strong foundation of core competencies. We are always asking: What can we do in a meaningful way with these technologies?” 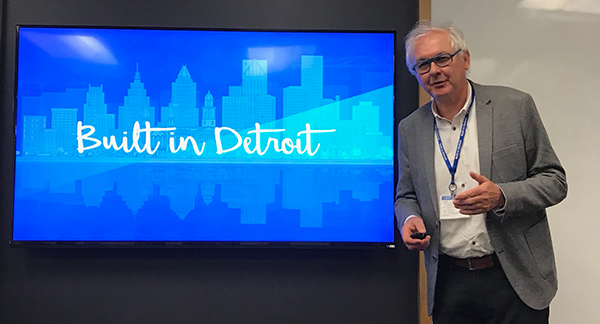 CEO and Founder Fried Vancraen’s shared his insights on the state of 3D printing and Materialise’s role in the future of additive manufacturing.

He cited Materialise’s work in medical, noting, for example, how the company found success in using 3D printing to help people overcome challenges. He mentioned 3D printed surgical guides, along with heart, face and jaw models, and implants that they’ve designed via their software and 3D printing processes. Examples of 3D-printed medical models line the walls of the Michigan facility.

Vancraen also addressed the company’s work in the automotive industry, including an accelerated investment in drive components of electrical cars, among other applications, such as engine components.

Peering into 3D printing’s future, Vancraen said: “Today with everything happening in the digital world, everything is upfront. There’s a digital threat.” 3D printing today is “about engineering unique pieces. The printing process is happening in shorter and shorter times. Process control and access is yet another dimension of all this connectivity. It serves as the framework of industry 4.0.”

In identifying current trends in additive manufacturing, Vancraen said “The beauty of 3D printing is that it has the potential to develop in both directions, the production line and decentralization.” The challenge for Materialise’s future success? “Focusing on the right markets.”

During the tour, Materialise staff highlighted the company's medical production focus in the U.S., noting how industrial production is carried out elsewhere in the world. Production takes place in the U.S., Belgium and Japan.

At the first tour stop, Clare Ward, application engineer of Materialise, showed work done on a heart model developed via Materialise Mimics software, which uses computed tomography data translation and converts it to an STL model.

At another tour stop, Dave Flynn showed examples of how Materialise produces specific surgical guides for knee implants, for example, as well as surgical guides or pieces used to prep bone for receiving implants.

Examples of patient-specific implants posted on the walls of the Materialise production facility in Michigan.

Materialise has also stepped into the orthopedic custom shoe insole market. Services are provided via its Streamics software system.

The tour included a walk through the machinery room, which housed SLA and SLS equipment. The machinery in Plymouth outputs 400 to 500 components nightly. Worldwide, Materialise runs around 200 machines.

The last stop before dinner was the HIPAA (Health Insurance Portability and Accountability Act) room, where verification of packaging and shipment is conducted. Approximately 1,200 to 1,400 guides are shipped per month. 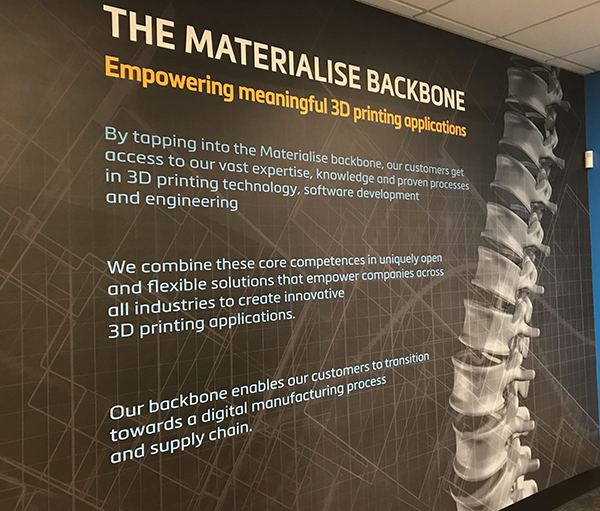 As part of its mission, Materialise says it aims to combine its core competencies in 3D printing technology, software development and engineering, which is displayed prominently as its “backbone” on a wall in the Plymouth, MI, facility.

As evidenced by the tour, Materialise continues to discover ways to meld human ingenuity with machine productivity.

“We [as an industry] underestimate the importance of connectivity,” Vancraen said. “This is a theme we are bringing to RAPID (see the company's partnership announcement here). No company can do it alone. Our systems need to be able to talk to each other.”

And it’s not just about the machinery, he added—Materialise works to “connect passionate people.”