Graebert has added a whole new set of productivity tools for Windows users. 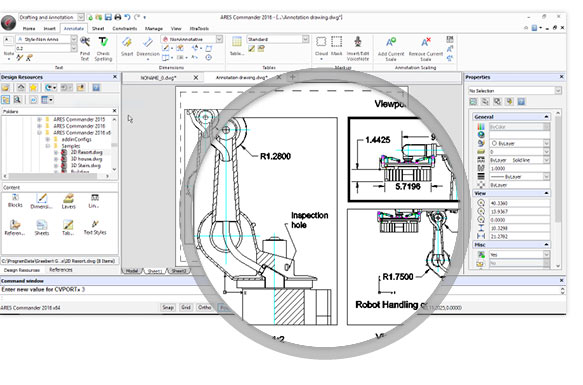 ARES Commander 2016 introduces new annotation scaling functionality that provides smart scaling of annotations on layout sheets and printouts. This functionality adjusts the size and scale of your dimensions, texts, hatches and blocks to the scale of each viewport. Image courtesy of Graebert GmbH.

Graebert GmbH, a provider of CAD solutions, has released the 2016 version of its DWG-alternative ARES Commander 2D/3D software. ARES Commander, which runs on 32- and 64-bit Windows, Mac and Linux operating systems, has been enhanced with a variety of productivity features and introduces a set of productivity-driven commands for Windows users. ARES Commander 2016 is available immediately.

A new Quick Input feature in ARES Commander 2016 provides you with dynamic information and input boxes near your cursor. With it, you can enter coordinates, angles and distances as well as display dynamic information about lengths, angles, prompts and options. Image courtesy of Graebert GmbH.

Among the new features in ARES Commander 2016 highlighted by Graebert are:

ARES Commander 2016 introduces a new group of productivity-driven commands for Windows systems called XtraTools. The company adds that it is “actively working to provide these productivity-driven tools to its Mac and Linux users.” Among the new XtraTools are the PatternHatch and CurvedText commands as well as new utility tools for managing blocks.

ARES Commander 2016 marks the debut of a new group of productivity-driven commands for Windows systems called XtraTools. Shown here is CurvedText, a new command available in the new XtraTools menu and tab that lets you create curved text entities along the convex or concave sides of an arc. Image courtesy of Graebert GmbH.

The PatternHatch command, says Graebert, helps users improve drawings by enabling them to create hatches using patterns of images or blocks. Advanced options include scaling, spacing and rotation of the pattern of your choice. The Curved Text command enables users to draw text alongside of or inside of an arc. Among its options are text formatting, offset distance and the ability to choose the convex or concave sides of an arc.

The new Windows utility tools for managing blocks include ReplaceBlock and ReplaceBlockByReference for substituting existing blocks with others. The GetBlockInfo tool generates a report listing the number of occurrences of each block, and other commands help you to import or redefine block attributes.

ARES Commander 2016 introduces new annotation scaling functionality that provides smart scaling of annotations on layout sheets and printouts. This functionality adjusts the size and scale of your dimensions, texts, hatches and blocks to the scale of each viewport. Image courtesy of Graebert GmbH.

“Graebert offers much more than just a cost-effective alternative to create or modify DWG drawings – we provide the most modern and productive CAD solution available, with unique features focused on both productivity and ease-of-use,” said Cédric Desbordes, executive for Sales & Marketing at Graebert GmbH in a press statement. “We believe that our users should not be tied down to just one computer at the office. When you buy ARES Commander, you pay only once to work on PCs running any OS – Windows, Mac and Linux – as well as from a smartphone or tablet with ARES Touch (supporting Android and soon iOS) and, in the near future, through the cloud with ARES Kudo.”

The company has also announced that ARES Commander 2016 can now be purchased as a perpetual license or an annual (12-month) plan. Additionally, any license comes with a 12-month subscription to ARES Touch mobile CAD app for Android tablets and smartphones. The iOS version of ARES Touch will be available by the end of the second quarter in 2016, according to the Graebert website.

Pricing for ARES Commander 2016 begins at $250 for an annual subscription, which includes updates and email support. A perpetual license of ARES Commander is $795, and a one-year flexible network license is $995. Perpetual and network pricing includes one year of upgrades and email support as well as a year of ARES Touch. Optional electrical and mechanical design as well as rendering are among add-ons and plug-ins available.

ARES Commander is available in 14 languages in addition to its multi-platform support. The ARES CAD engine also powers such OEM (original equipment manufacturer) solutions as CorelCAD, DraftSight and Onshape.

See all the new features in ARES Commander 2016.

Check out the ARES Commander price and licensing options.

See why DE‘s Editors selected ARES Commander 2016 as their Pick of the Week.