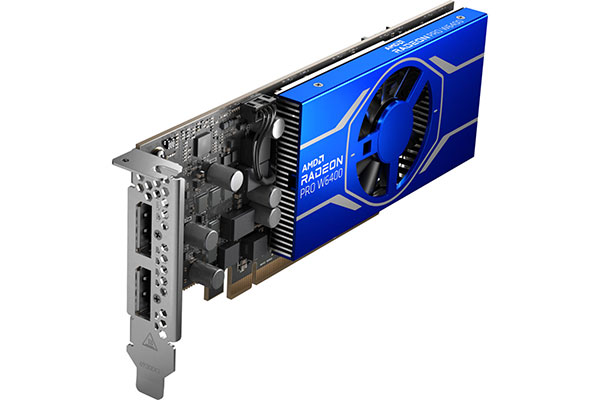 AMD is a long-time competitor to Intel in the CPU market, but the Sunnyvale, CA, company moved into graphics in a big way in 2006 when it acquired Canadian graphics card manufacturer ATI and took over the development of the ATI FirePro graphics boards. AMD continued to use the FirePro name on its professional workstation-class cards until 2016, when it introduced the Radeon Pro WX series.

Since then, we have reviewed numerous AMD Radeon boards. Most have been high-end boards aimed at the most demanding users. For example, in 2020 we reviewed the AMD Radeon Pro WX 8200 and W5700 graphics processing units (GPUs; DE June 2020).

Offering an ideal blend of performance and efficiency at an affordable price, the new entry-level W6400 graphics card is optimized for the requirements of popular CAD and office productivity applications in a compact design that can be easily added to modern small-form-factor (SFF) desktops.

The board comes with a condensed bracket for installation in SFF systems, but you can easily swap this out for a long bracket for mounting in full-size workstations. The new Radeon Pro W6400 graphics card delivers significant performance improvements compared to the previous generation AMD Radeon Pro WX3200, according to AMD.

The AMD Radeon Pro W6400 graphics board is based on the Navi 24 graphics processor, a chip with 5,400 million transistors on a die measuring 107mm2. The board features 768 shading units, 48 texture mapping units, 32 render output units (ROPS) and 12 compute units. The card also has 12 ray-tracing acceleration cores. The board’s 4GB of GDDR6 memory is connected using a 64-bit memory interface to deliver a bandwidth of 128GB/second. 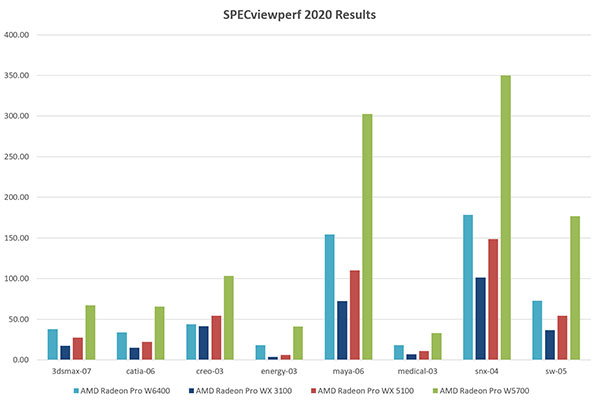 By comparison, the previous generation AMD Radeon Pro WX 3200, built on a 14nm process and based on the Polaris 23 graphics processor—a chip with 2,200 million transistors—included 4GB of GDDR5 memory and incorporated 640 shading units, 32 texture mapping units, 16 ROPS and 10 compute units. But the previous generation GPU did not include any ray-tracing acceleration cores and did not support virtual reality headsets.

With its power draw of only 50 watts maximum (10 watts less than its predecessor), the single-slot AMD Radeon Pro W6400 does not require any additional power. The board plugs into a PCI-Express 4.0 x4 slot and includes two DisplayPort 1.4a connectors.

To see how well the new GPU performs compared to the previous generation, we typically test the new and old board in the same workstation. Since we never received a WX3200 for testing when that board was released back in 2019, we performed comparisons to other AMD graphics cards we did have—specifically the AMD Radeon Pro WX3100 (introduced in 2017), WX 5100 (2016) and the W5700 (2019).

We installed each board in turn in the same HP Z2 Tower G8, a workstation (DE, February 2022) based on a 3.5GHz 8-core Intel Core i9-11900K CPU equipped with 32GB of memory, running the latest build of Windows 10 Pro, and using the latest version of the unified AMD driver, so that the only variable was the GPU itself. We ran the latest 2020 version of the SPECviewperf benchmark.

While we were unable to compare our test results for the W6400 with its predecessor, the results compared to the WX 3100 were quite impressive, with scores on the individual graphic datasets ranging from 6% to more than 400% faster. The new Radeon Pro W6400 also outperformed the older, more expensive WX 5100, but was no match for the high-end W5700.

With its two DisplayPorts, the AMD Radeon Pro W6400 only supports two displays, but it can drive two 5K displays. Both ports support display stream compression and audio, with each port capable of high dynamic range for maximum clarity and truer colors.

For digital artists working on bleeding edge visual content, the W6400 is also capable of delivering a single 8K Ultra-HD output. By comparison, the previous generation WX 3200 supported up to four displays and the even older WX 3100 supported three. But unlike its predecessors, the W6400 is virtual reality-ready. 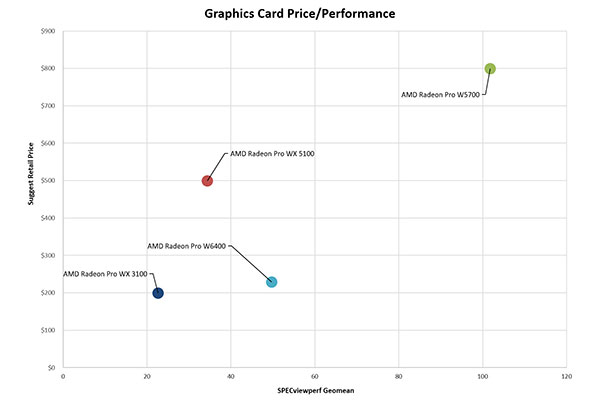 Like previous AMD boards, the W6400 is fully certified with most CAD and digital content creation applications. The new board uses the latest Radeon Pro Software Enterprise Driver, which is available for the 64-bit versions of Windows 11, Windows 10, Windows Server and Linux. Customizable fan control options in the Radeon Pro driver let you optimize performance when running demanding workloads, and like previous boards, the W6400 is covered by a three-year warranty.

All things considered, the AMD Radeon Pro W6400 is a great entry-level workstation GPU. Prospective buyers may be surprised, however, to find that due to continuing supply chain issues, the current average street price is $30 higher than the suggested retail price. Even with that premium, the Radeon Pro W6400 is a worthy addition to the AMD lineup.

David Cohn is a consultant and technical writer based in Bellingham, WA, and has been benchmarking PCs since 1984. He is a Contributing Editor to Digital Engineering, the former senior content manager at 4D Technologies, and the author of more than a dozen books. Email at david@dscohn.com or visit his website at www.dscohn.com.