Stratasys J850 3D printer and the new materials released with it advance use of 3D printing throughout the design process.

Stratasys J850 3D printer and the new materials released with it advance use of 3D printing throughout the design process. 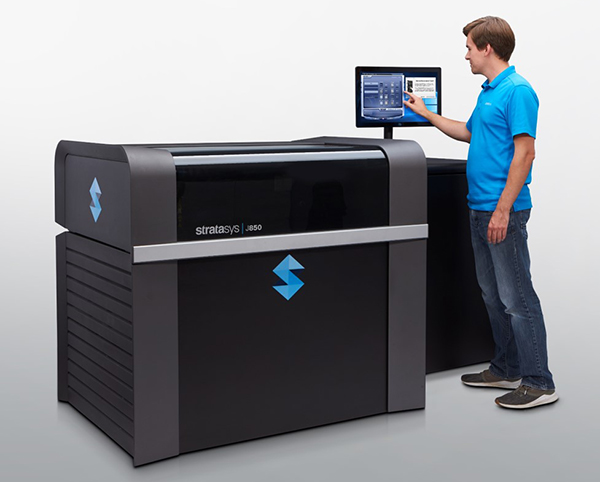 The Stratasys J850 3D printer can print up to twice as fast as previous J-Series printers, thanks to a new Super High Speed mode. Image courtesy of Stratasys.

The Stratasys PolyJet series of 3D printers has gained in popularity with designers because of the printers' ability to print multiple colors in one print job, and for the variety of materials available for prototyping. Stratasys has announced the next generation of its full-color, multi-material PolyJet line, the J850 3D printer. This printer, and the new materials released with it, advance the use of 3D printing throughout the design process. It is a natural choice as our Editor’s Pick of the Week.

Stratasys says the J850 can print up to twice as fast as previous J-Series printers, thanks to a new Super High Speed mode. Another key to speed is found outside the printer, in model preparation. The J850 uses GrabCAD Print technology, which allows the user to select a CAD model from the GrabCAD repository and send it straight to the 3D printer without intermediate translation to STL.

The ability to print in multiple colors is a big draw for the PolyJet line. The J850 advances the ability to print in the exact colors needed by offering more than 500,000 colors. Each material used in the J850 comes in the four primary colors (abbreviated as CMYK) plus white. This allows blending to create the exact shade required. The J850 is Pantone Validated, the first time a 3D printer can offer the Pantone Matching System. Stratasys says selecting a Pantone color is a one-click operation.

The ability to get the exact look extends beyond color. Color textures and gradients are also possible with the J850. Rigid opaque parts can be 3D printed with a variety of realistic patterns like wood grain, woven compositions and even photographs or illustrations. Gradients allow a transition zone between colors, blending one into another.

The J850 comes with new materials that extend creative possibilities beyond previous generations. VeroClear and VeroUltraClear provide a range of transparencies, from slightly translucent to completely clear. The rubber-like Agilus30 material offers flexibility in various durometers. In use, this means users can create prototypes that have soft and hard materials.

With other 3D multi-color solutions, a drawback has been relatively rough surface finish, requiring post-processing if a smooth finish is required. The Stratasys J850 achieves very fine layer thickness, as low as 14 microns in high quality print mode.

We haven’t yet mentioned the seven resin basins, the build area and many more of the important specs about this printer. Be sure to click through to the Product Brief on the J850 for more details.

Thanks for reading. We’ll be back next week with another Editor’s Pick of the Week.