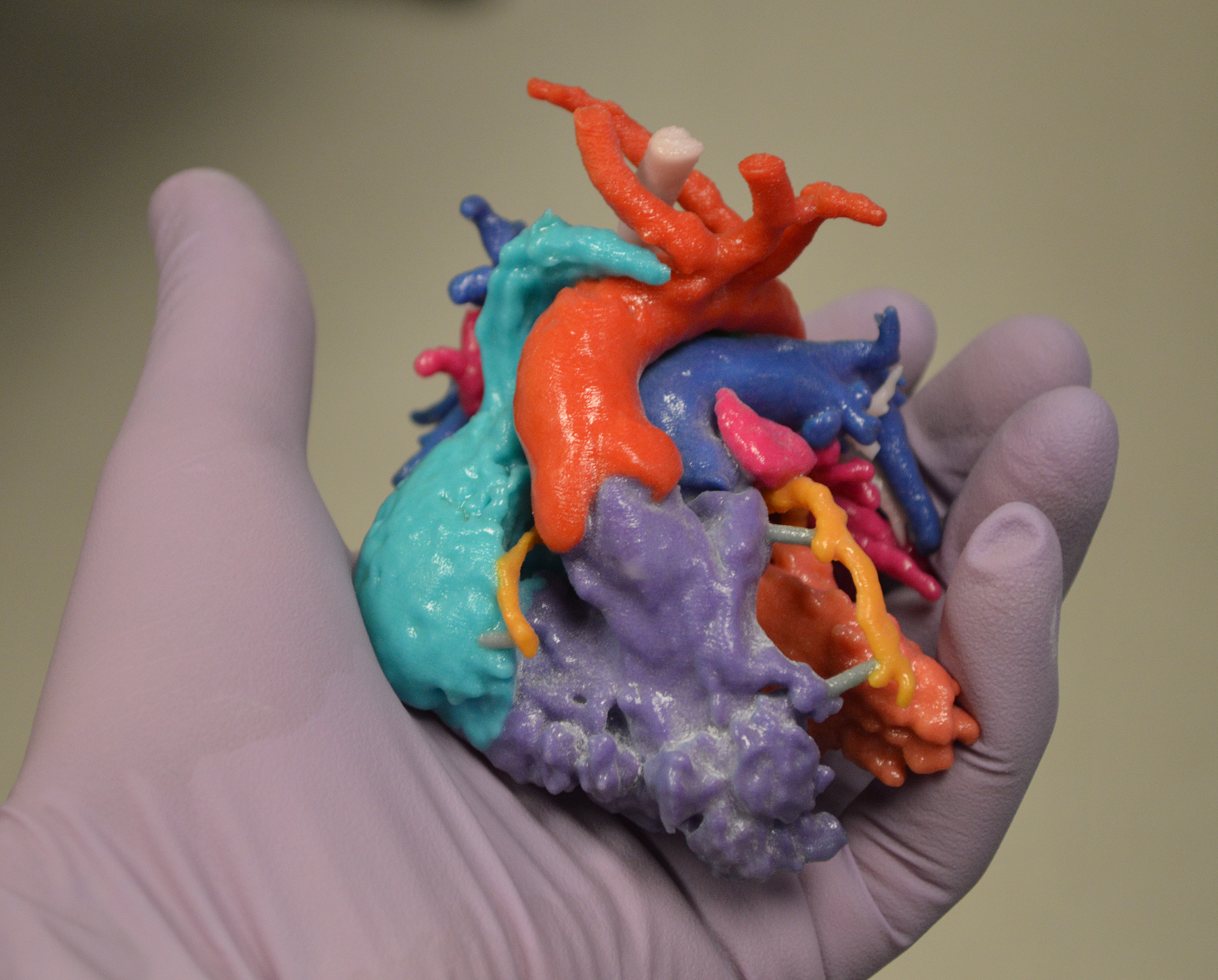 Imagine doing open-heart surgery. Then imagine doing it on a heart that is maybe the size of a small lemon, structured with its major components in all the wrong places (hardly textbook). And the operating room clock is ticking. A little help here, please?

At the Heart of Clinical Trials

That help is coming in the form of full-color, full-scale 3D-printed models surgeons can hold and analyze for pre-surgical planning. Through a new program called Project 3DHEART, over the next two years physicians around the country will be participating in a clinical trial to quantify the benefits of using such models, both health-wise and economically.

Project 3DHEART, which stands for 3D Hearts Enabling A Randomized Trial, is a single-blind clinical trial that continues and formalizes work begun on a case-by-case basis several years ago. It is the first to study the use of patient-specific 3D-printed models in pre-operative planning for pediatric heart surgery, with the focus on congenital heart patients requiring complex two-ventricle repair. Currently, insurance does not cover the cost of such models, so the primary project objective is to quantify improved (decreased) cardiopulmonary bypass time needed during surgery, to help convince insurance companies the concept has quantitative value.

“If you can reduce the time that the patient is under anesthesia, and reduce overall time in the operating  room, that benefits both health and economics,” says Justin Ryan, a research scientist at Phoenix Children’s Hospital, one of the primary investigators for 3DHEART. “Operating-room time costs could be on the order of $100 a minute,” he explains. “In minutes you could recoup the cost of labor and materials needed to develop the model.”

Secondary study endpoints include assessing surgical improvements, physician assessment of how useful it was to have the 3D-printed model for pre-op study, and collecting data on mortality rates with and without the model in use. The program will be managed by OpHeart, a non-profit organization dedicated to improving the odds and outcomes of children born with life-threatening heart defects.

Phoenix Children’s pioneering work in this field goes back to 2012, when it began collaborating with Arizona State University to print medical models in a new on-site hospital lab dedicated to 3D printing. Ryan (at the time an ASU graduate student) became the go-to person to use Materialise Mimics software to translate CAT and MRI scan data into 3D CAD models suitable for printing.

The research group worked on several pilot cases using printers from both Stratasys and 3D Systems, eventually supporting referral cases at both CHOP and CNMC. “We’ve produced over 350 so far at our institution,” says Ryan, “and over the next two years, every patient in the 3DHEART program will filter through Phoenix Children’s, for close to 200 more. We’ve gotten very efficient at producing these 3D-printed models.” Given the scope of this project, Phoenix Children’s will create the 3D CAD models then Stratasys Direct Manufacturing will print them through its network of Stratasys Connex multi-material, full color 3D printers.

Cabinets in the Phoenix Children’s Cardiac 3D Print Lab display dozens of examples of patient-specific pediatric heart models. All are dwarfed by an adult-sized reference model. All present hands-on evidence of a heart defect that until recently could only have been mentally visualized by surgeons working from flat images of CAT and MRI data.

OpHeart’s website notes that, for certain heart defects, the manner in which the heart can be repaired is determined by the distance between particular structures. Relying on just 2D data, or even viewing 3D CAD models on a computer still doesn’t capture and present the spacings among these tiny structures the way that a 3D-printed hands-on model can.

OpHeart’s motto is, “Practice hearts make perfect surgery.” Dr. Yoav Dori, Pediatric Cardiologist at CHOP, echoes this thought, saying, “If we can empirically demonstrate this, it will be a game-changer for treating not only children with congenital heart defects, but patients across the board.”