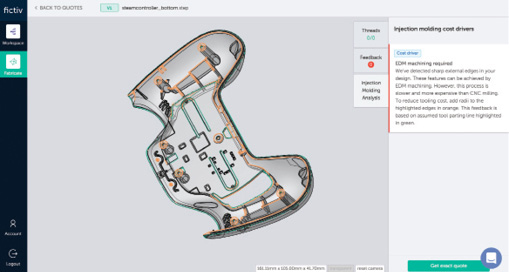 For many on-demand manufacturing service providers, an online or CAD-embedded tool is an integral part of the automated quote system. Shown here is Fictiv’s online design check. Image courtesy of Fictiv.

From the outset, what Fictiv and Xometry appear to do is no more than matchmaking. It’s the principle pioneered by tech disruptors such as Airbnb, applied to manufacturing. Airbnb matches those seeking short-term living accommodations with those who happen to have extra space that can accommodate travelers. Thus, a whole new ecommerce infrastructure was born to satisfy the backpackers and budget-conscious travelers who previously didn’t have an option; and the homeowners who previously didn’t have a good way to offer their extra bedrooms and vacation homes for rental.

Similarly, manufacturers with extra production capacity can join the Fictiv and Xometry networks, where they could be discovered by inventors, hobbyists and small startups with low-volume orders. But what makes the on-demand manufacturing economy run smoothly is much more than a simple online discovery process.

There’s something beyond the algorithms that find and connect those who need parts and those who can make them. It’s the CAD-integrated plug-ins and the cloud-hosted mechanism that let users inspect their own parts for manufacturing issues before pressing the “Buy” button.

A simple manufacturing check could be performed based on CAD geometry, using general computer-aided manufacturing (CAM) principles. For example, designs destined for additive manufacturing (AM) should address overhangs and thin walls before entering production; therefore, the plug-in can help identify these features and flag them for revision.

To upload your 3D design to get a quote, you can reach Xometry through its website. But for SolidWorks and Autodesk Inventor users, there’s an option to use Xometry’s CAD plug-in. Once downloaded and installed, the Xometry plug-in functions as a quote engine inside the CAD program that’s available for you to instantly submit the part for manufacturing analysis and get a cost estimate.

“With the plug-in, we can give you the feedback you need early on, so you have a better understanding of the cost and production impact,” explains Bill Cronin, Xometry’s chief revenue officer.

Another on-demand manufacturer service provider, Plethora, offers a plug-in for SolidWorks, Autodesk Inventor, Solid Edge and NX (the latter two from Siemens PLM Software). “The plug-in is a single download, but it figures out the appropriate plug-in depending on your CAD system,” says Ben Mitchell, chief product officer of Plethora. “The plug-in can give you [a] red light or green light [depending] on whether the part can be made. If not, it can show you, in your CAD environment, the issues that need to be fixed.” 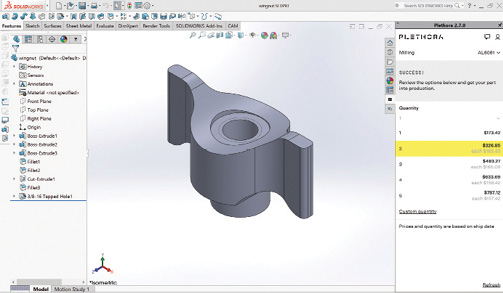 As an independent operator, Plethora has intimate knowledge about its own capacity, what it can and cannot make, and what its production queue looks like at any given moment. Therefore, Plethora’s plug-in also takes these into consideration when responding to queries or issuing estimates.

Founded in 1999, Protolabs was originally an injection molding part producer. But in 2014, the company entered a new territory when it launched an industrial-grade 3D printing service. Today, it operates as an on-demand manufacturing service, churning out parts from 12 facilities (seven in the U.S.) with turnaround time as fast as a single day.

One key to Protolabs’ automated submission and quote system is the cloud-hosted ProtoQuote software. It can analyze uploaded geometry for problem-prone undercuts, draft angles, surface finishes, wall thickness and material flow, and suggest sensible revisions. The company calls it their “secret weapon” in its video demo.

But Fictiv’s involvement is much more than automatic part analysis and matchmaking. “Once the order is placed, we intelligently match orders with the right manufacturer for the job. Post-order, there are several Fictiv employees working behind the scenes to ensure parts are made on time and to the customer’s detailed specifications. This includes quality control engineers, customer success managers and technical project managers who communicate project details to our manufacturing partners. Fictiv takes responsibility for part quality every step of the way to guarantee customer satisfaction,” says Dave Evans, co-founder and CEO of Fictiv.

The on-demand manufacturing commerce has also attracted the attention of some CAD and product lifecycle management (PLM) vendors. As developers of the primary design software tools used by engineers, they seem well-positioned to implement an instant design check mechanism and facilitate the order.

For the type of large manufacturers Siemens PLM Software targets, a different approach is warranted. “You can initiate the buying process from CAD, but most of them prefer to do that from the PLM system, so in our customers’ case, they start with Teamcenter, then get the part made through our AM Network,” says Robert Meshel, director of AM Network, Siemens PLM Software.

By navigating the PLM system, the user creates a record of the transaction, along with traceability and history.

Aiming to cater to the underserved segment, vendors like Fictiv, Xometry and Plethora input measures to facilitate orders as few as one unit. “We pride ourselves on having no minimum order quantities for injection molding, which enables emerging hardware companies to reduce up-front costs and de-risk new product launches. On the high-end, today we can help customers scale to produce over 2 million injection molded units and as our network grows, this capacity will grow as well,” says Evans. 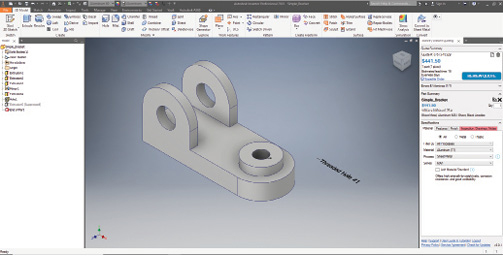 Xometry’s CAD plug-in, shown here in Autodesk Inventor, functions as a quote engine inside the CAD program. Users can submit the part for manufacturing analysis and get a cost estimate without leaving the CAD environment. Image courtesy of Xometry.

“Xometry doesn’t have a minimum cost. You can come and order a single part of $6 to $10,” says Cronin. “We use machine learning algorithms to set the price for a job. As more people come to get quotes from us, we become more knowledgeable about market prices.”

The low-volume order fulfillment is critical to attract small firms and startups, but the on-demand vendors also face the conundrum of success. “Most of the parts we’re making at Plethora are in quantities of less than 10,” notes Mitchell. “But what if one of our regular customers becomes a Kickstarter success and suddenly gets 10,000 orders? For those customers, we may very well be their path to growth.”

The Kickstarter success dilemma, however, is not the norm. Most users will follow a longer road to success, learning through trial-and-error cycles. That means, there’s still a lot of prototypes to be made, a lot more orders to be filled.